Alarms Shut Down U.S. Side of International Space Station 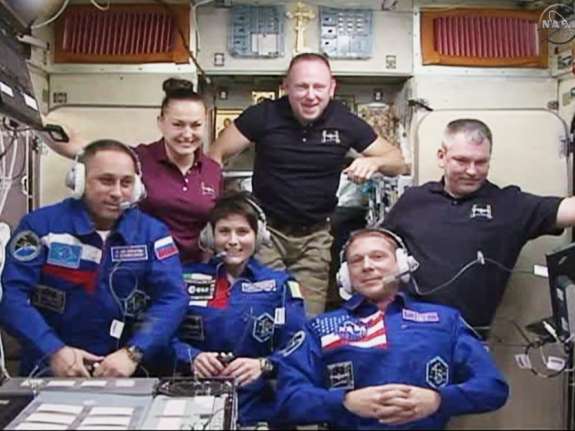 The crew of Expedition 42 on the International Space Station. Photo: NASA

Astronauts aboard the International Space Station got an unscheduled day off on Wednesday after an alarm triggered fears of an ammonia leak.

Astronauts took shelter in the Russian module as flight crews tried to figure out the problem and sealed of the U.S. module.

The crew powered down non-essential equipment in the U.S. module and suspended the start of two experiments scheduled for Wednesday.

Specialists in Houston ruled out the leak. “Ammonia can be pretty nasty in an enclosed environment because this is much higher percentage of ammonia than what we use in our cleaning supplies. It’s an excellent coolant, but not good to expose to lifeforms,” says Space Florida’s Dale Ketcham.

Despite the scientific hiatus, Ketcham thinks there’s something to learn from the day. “It’s going to be interesting to see how they behave. Usually up there, your day is very rigorously scheduled and regimented as how much time to spend on this and that,” he says.

The crew will enter the U.S. module Wednesday afternoon to test the air. If no ammonia is detected, they’ll move back in.

Two American astronauts are currently on board.