Ahead Of New Talks, Russian Minister Calls For Ukraine Cease-Fire 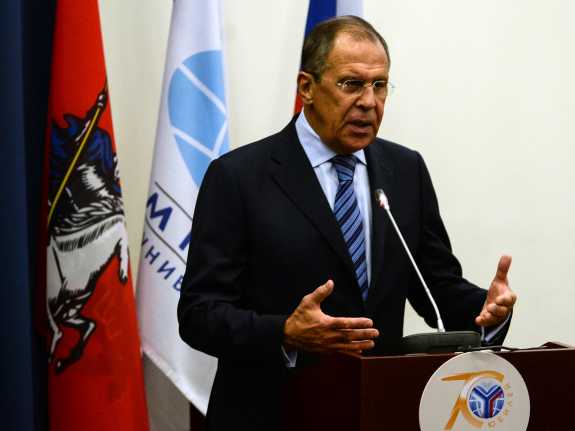 Russian Foreign Minister Sergei Lavrov called Monday for a cease-fire in Ukraine, but demanded that Ukrainian troops leave positions from which they can "harm the civilian population." His comments come ahead of talks in Minsk, Belarus, involving Ukraine, Russia, Russia-backed separatists and international monitors.
Image credit: Jia Yuchen

Russian and Ukrainian officials are meeting today in Minsk, the capital of Belarus, with Russia-backed separatists and international monitors to discuss a proposed cease-fire to stop the fighting in Ukraine.

Russian Foreign Minister Sergei Lavrov said the meeting’s goals should be a cease-fire, but he demanded that Ukrainian troops leave positions from which they can “harm the civilian population.”

Karoun Demirjian, who is reporting for NPR from Moscow, tells our Newscast unit:

“[A] rebel leader in Donetsk told Russian news service Interfax that their main goal is to win recognition of their independence from Kiev.

“During a television interview, Russian President Vladimir Putin said statehood in eastern Ukraine should be one of the topics up for discussion — the Kremlin stressed though, that Russia isn’t directly supporting calls for independence.

Monday’s meeting in Minsk comes a day after a Ukrainian border guard vessel was attacked near the eastern Ukrainian port city of Mariupol.

NPR’s Soraya Sarhaddi Nelson, who is reporting from Mariupol for Newscast, says Ukrainian officials blamed Russian-backed separatists for the attack on the vessel patrolling in the Sea of Azov. She adds: “The separatist fighters last week launched an offensive along the coastline and now control several towns and villages here.

The crisis in Ukraine has resulted in the worst ties between Moscow and the West since the end of the Cold War.

Indeed, Sen. Robert Menendez, D-N.J., chairman of the Senate Foreign Relations Committee, told CNN on Sunday that the U.S. should “provide the Ukrainians with the type of defensive weapons that will impose a cost upon Putin for further aggression.”

Sen. John McCain, R-Ariz., echoed those calls in an interview with CBS’ Face the Nation.

In a news conference last week, President Obama blamed Russia for the violence in Ukraine. The administration’s actions against Russia have so far mainly been limited to economic sanctions on Russia’s banking, energy and defense sectors.

“Capital is fleeing, investors are increasingly staying out, his economy is in decline,” Obama said last week. “This ongoing Russian incursion into Ukraine will only bring more costs and consequences for Russia.”