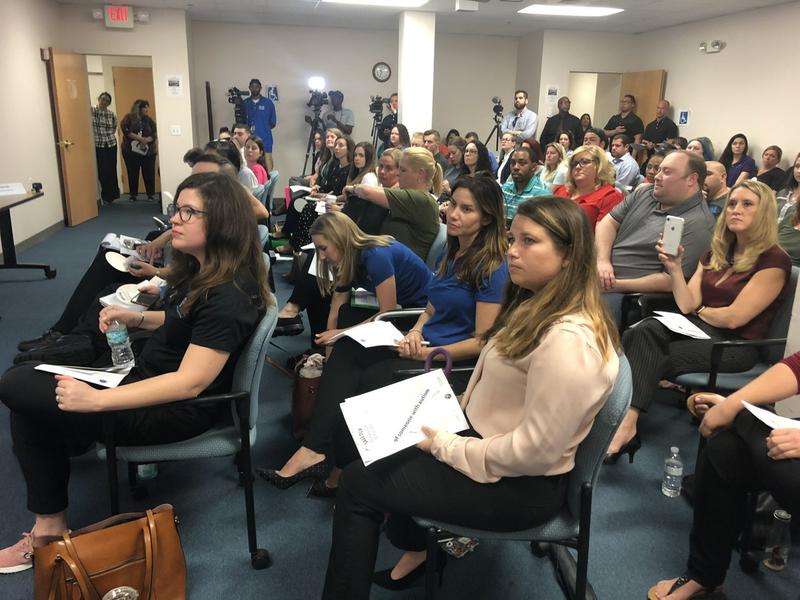 Providers and parents fill the room of AHCA's Tampa field office for a public meeting about proposed changes to behavior analysis therapy through Florida Medicaid. Future meetings will be held in webinar form. via DAYLINA MILLER / WUSF PUBLIC MEDIA

Behavioral therapists who work mostly with children on the autism spectrum say the state agency that oversees the Medicaid program is finally starting to listen to their concerns.

The State Agency for Health Care Administration is now running meetings on behavior analysis therapy changes — that had been scheduled in Miami, Fort Lauderdale, and Pensacola over the coming weeks — in webinar form.

This comes after complaints from providers and parents that a lot of people were locked out by the 150-person cap on attendance. Attendance was restricted after a Tampa meeting was split into two session because too many people tried to attend.

The webinars allow up to 1,000 people to participate. If demand exceeds the available slots, AHCA will schedule more webinars.

Karen Wagner, owner of Behavior Services of Brevard, said the webinars will be more accessible than in-person meetings, especially since many providers were traveling across the state to attend each meeting.

“It takes time out of the day, it can be extremely inconvenient, and a lot of providers lose money and people lose service for that day,” Wagner said.

The webinar format will also allow more parents to attend. When AHCA first capped attendance and required registration, most of the sign-up slots went to providers.

There are some providers who are concerned that the webinar format is a way to prevent rallies and restrict media access. They’re also worried the chat format could make it easier for the agency to ignore certain questions and comments.

In an email to providers, AHCA wrote:

“The Agency has hosted several public meetings to introduce proposed changes to Medicaid-covered behavior analysis services. These changes are being proposed to ensure children receive the right service, at the right time, and by the right provider. It is of chief importance to the Agency that children who need behavior analysis services receive the highest quality of care and continue to receive services in a timely manner.

Based on public input to date, we are modifying the proposed changes and the schedule for implementation.”

Wagner said that while agency officials conceded they did not loop in providers as soon as they should have, she’s pleased with the changes they’ve made after public outcry.

“I think we’ll have to do a little bit of a wait and see but I’m heartened by the fact that they seem to be responding to our fairly pragmatic concerns,” Wagner said.

“It’s clear that state officials are listening to the heartfelt concerns and vocal comments that have come from parents and providers across the state,” said Andrew Houvouras, BCBA President of the Florida Association for Behavior Analysis, in a news release.

“This is an important step in the right direction and we are confident that these new changes will provide more opportunity and time for providers and state officials to collaborate and work toward our shared goal of ensuring that every individual in Florida who needs services is able to work with a qualified behavior analyst.”

Aside from changing the meeting format, other changes include:

The agency previously announced it will postpone changes that would have reduced reimbursement rates paid for behavior analysis services by as much as 54%.

The proposed changes come after AHCA starting cracking down on fraud in South Florida a year ago. Providers said the state’s efforts have backfired, resulting in authorization clogs, frozen payments, and credentialing issues that meant some children lost their services temporarily or permanently, while others sit on clinic waitlists.

Click below to register for the three webinars currently scheduled: