After Three Decades On Capitol Hill, Nelson Leaves Behind Legacy Of Space Policy 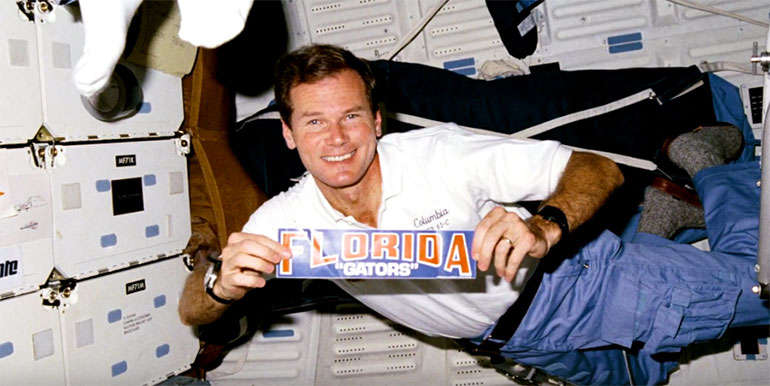 Senator Bill Nelson’s more than three decades long political career has come to an end. After a contentious election and chaotic recount, Governor Rick Scott will take over as Florida’s Senator next month.

On one of his last days in office, Senator Bill Nelson saw the Senate pass the Space Frontier Act. If passed by the House, it would extend the life of the International Space Station and roll back regulations to help develop commercial space partnerships.

“This bill is another step, building on the NASA authorization act nearly a year ago,” Nelson said to his Senate colleagues.  “Indeed it is my privilege to be out here and to be a part of the passage of this legislation.”

It’s fitting that one of Nelson’s last feats as a lawmaker was passing a space bill. For the better part of 30 years, the 76-year-old native-Floridian championed space policy.

“Senator Nelson has been a strong advocate for space, particularly Kennedy Space Center and Cape Canaveral especially with regards to the more traditional, big NASA programs,” said Laura Forczyk, a space policy analyst and founder of the firm Astrolytical. “Most recently the space launch system, he was a big champion of that program and continues to be, even in his final farewell speech.”

Nelson’s passion for space took off back to 1986 when NASA selected two politicians to send on the Space Shuttle. On a cool, January morning, Nelson and six other crew mates blasted off from Kennedy Space Center on a six day mission.

During his final floor speech earlier this month, Nelson credited that trip to space as a moment of clarity and an event that changed the way he approached legislating.

“I strapped in to launch to the heavens to see our planet from a way that very few others have. You’ve heard me talk about that as I describe our environment and how beautiful this planet is from the window of a spacecraft.”

Nelson sat on the Senate Committee on Commerce, Science and Transportation – the committee responsible for allocating funding for NASA and steering the agency’s agenda.

Nelson’s ability to reach across the aisle and move space policy forward was one of his strong suits, said University of Colorado Boulder’s Phil Larson, a former Obama administration senior adviser.

“Senator Nelson stood behind President Obama when he signed the NASA authorization act of 2010 and Senator Nelson was in the room again in the Oval Office with the Trump administration when they put forward their space legislation and signed it into law.”

Nelson worked for the benefit of Florida and the Kennedy Space Center. With Nelson out, the future of space policy, especially from Florida legislators, is uncertain. It’s unlikely the state’s soon to be senior Senator Marco Rubio will be the same advocate for space. “It hasn’t been a strong interest, he hasn’t been the champion Senator Nelson has been,” said Forczyk.

Late in his career, Nelson was criticized for not fighting hard enough to keep the Space Shuttle Program alive. NASA decided to end the program in 2011 citing budgetary and safety concerns, but ending the shuttle program put thousands of Floridians out of work.

The Senator also faced backlash for using his political clout to score himself a seat on that 1986 shuttle mission – a seat some critics argues would have been better filled by a scientist, not a politician.

Despite the criticism, Nelson will be remembered as the Senator who went to space – and the lawmaker who prioritized space policy.

But the Space Frontier Act, that last piece of legislation, ultimately died in the House. With that bill, a nearly thirty year political career came to a “wheels stop.”

Editors Note: This story has been updated after the U.S. House voted down the Space Frontier Act on December 22.