After The Taliban Takeover Of Kabul, Here’s What We Know 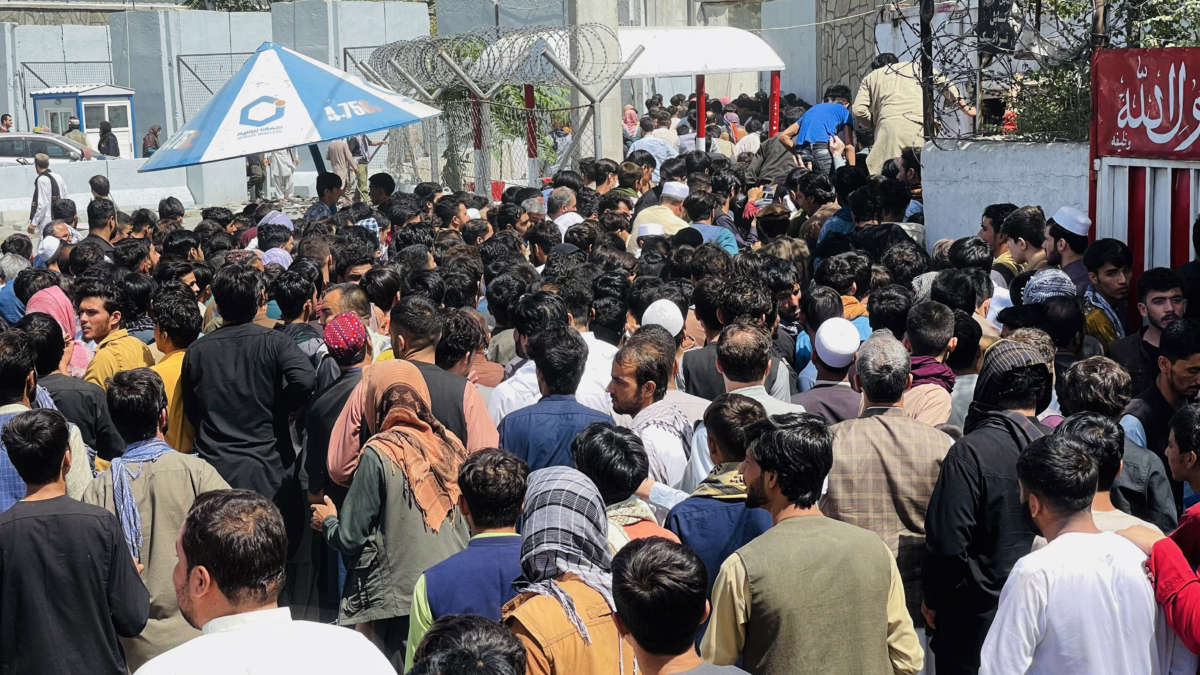 Afghans rush to the Hamid Karzai International Airport as they try to flee the Taliban takeover of Kabul.
Image credit: Haroon Sabawoon

Chaos erupted at Kabul’s airport as thousands of Afghans were left uncertain of their safety and livelihood after Taliban forces in Afghanistan occupied the capital city.

President Biden addressed the sudden collapse of the government the U.S. had spent 20 years supporting, and he acknowledged that it all unraveled quicker than he had anticipated. But he didn’t apologize for making the decision to withdraw all U.S. troops by Sept. 11 — the 2oth anniversary of 9/11.

He said he would take the criticism of people who see the operation as poorly planned, invoking President Harry Truman’s line “the buck stops here.” Biden said staying longer wouldn’t have helped and he wouldn’t pass the conflict along to a fifth president.

A mounting humanitarian crisis has drawn swift criticism from aid groups and from members of Congress who are critical of Biden’s course of action.

In the last few weeks, Taliban forces rapidly took control of provincial capitals and eventually descended on Kabul at a faster rate than any government officials expected, putting thousands of Afghans, particularly those who assisted U.S. forces, at risk.

Amnesty International has said decisions from the White House “only fanned the flames of this humanitarian catastrophe.”

“Every moment that the Biden administration continues not to course correct could have horrific consequences, exacerbating the already atrocious failures to support the people of Afghanistan, including the Afghans who risked their lives and those of their families to provide assistance to the U.S,” the statement said.

Chaos at the airport

Images of desperate Afghans at Kabul’s airport trying to force their way onto American planes to flee the country were shocking. The airport perimeter is currently secured by U.S. forces. According to the Associated Press, a defense official said an agreement had been reached that Taliban forces would not interfere with evacuation efforts at the airport in Kabul.

Critics point out that images of military planes flying over Kabul looked eerily similar to visuals of U.S. officials departing Saigon in the aftermath of the Vietnam War.

U.S. forces have set up a wired fence to keep crowds back and are sending an additional 1,000 troops to help secure the airport. The State Department confirmed this morning that all Embassy personnel are safe.

“We can confirm that the safe evacuation of all Embassy personnel is now complete. All Embassy personnel are located on the premises of Hamid Karzai International Airport, whose perimeter is secured by the U.S. Military,” State Department spokesperson Ned Price said.

Jon Finer, principal deputy national security advisor, told NPR, “We will continue to be working on securing the airport and maintaining these flights for as long as that can be done safely and securely.”

Left behind is a humanitarian crisis, a dangerous future for Afghan women and girls under Taliban rule and a number of unanswered questions from U.S. leaders about what will happen next.

United Nations leaders have been warning of signs of a humanitarian “catastrophe” in Afghanistan for months. A quarter-million people, 80% of whom are women, have fled their homes in 2021, even before the Taliban started encroaching on more Afghan cities.

Monday afternoon, the United Nations Security Council released a statement calling for “inclusive negotiations” for a new government, with the equal participation of women.

“The members of the Security Council called for an immediate end to the violence in Afghanistan, the restoration of security, civil and constitutional order, and urgent talks to resolve the current crisis of authority in the country and to arrive at a peaceful settlement through an Afghan-led, Afghan-owned process of national reconciliation,” the statement said.

The UN Secretary-General António Guterres, in separate remarks, also called on all countries to be willing to receive refugees from Afghanistan.

Concerns over how womens’ rights and girls’ education will devolve under Taliban rule is also high. There have been reports of Taliban forces removing women working at banks from their jobs and escorting them home, and replacing them with male workers.