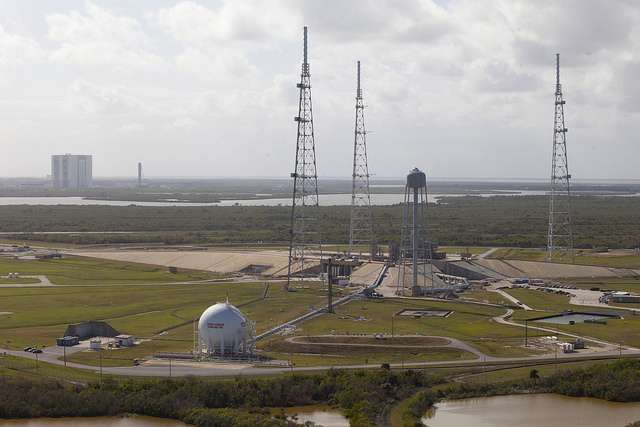 An aerial view of Launch Pad 39B at NASA's Kennedy Space Center in Florida. In view in the background is the Vehicle Assembly Building and the mobile launcher. Photo: NASA/Bill White

When the shuttle program ended more than five years ago, the future of spaceflight from Florida was uncertain. But now, NASA has an ambitious goal to send humans to places like the moon and Mars. How is Kennedy Space Center making the transition?

Launch of Discovery from Pad 39B with the Hubble Space telescope. Photo: NASA

Back in April, 1990, the Space Shuttle Discovery sat at Launch Complex 39B awaiting liftoff. The crew’s mission: to send the Hubble Space Telescope into orbit, the dawn of a new era of astronomy. Twenty seven years later, the sounds of rocket boosters and engines firing are replaced by bulldozers and construction workers.

The pad supported many historic missions like Apollo missions to the moon, the launch of SkyLab and the return to flight after the Challenger disaster.

Now, crews are refurbishing the launch pad to support NASA’s next historic mission: sending humans back into deep space. The agency is moving forward on building its next big rocket, Space Launch System (SLS). It will carry the Orion crew capsule to places like an orbit around the moon and eventually take humans to Mars.

Regina Spellman oversees the transition at LC-39B, including the water suppression system that protects the launch pad from the powerful force of the rocket blasting off.

“About 400-thousand gallons of water empties out here in about thirty seconds right before liftoff and right after liftoff,” she explains. “That has been around since Apollo and Shuttle. We’ve refurbished it, we’ve done some modifications to it.”

Changes at the Vehicle Assembly Building

But before the more than 200 foot tall rocket can launch, it has to be put together. Pieces of the rocket are manufactured at NASA centers across the country and shipped to the Kennedy Space Center. They’re collected at the Vehicle Assembly Building – a 500 foot tall behemoth of a building . There, each of the rocket’s parts like engines,  fuel tanks and boosters are stacked and assembled.

Much like the launch pad, the vehicle assembly building was around to support the Apollo and Shuttle programs. The rocket is assembled straight up the middle of the building while platforms surround the vehicle allowing technicians to attach all the parts and make the right connections.

Much like the launch pad, it’s also undergoing a transition of its own to support the SLS rocket. “We took all the shuttle platforms out and we modified the whole bay and then we added the new platforms that are going to be used to process the SLS vehicle,” said Jose Perez Morales, a manager at the Vehicle Assembly Building.

The entire Kennedy Space Center is transitioning from the shuttle days to what officials call a multi-user spaceport, supporting both public programs and private space companies. In fact, SpaceX leases the launch pad next to 39B, where it launches the Falcon 9 rocket. Like the SpaceX pad, NASA says 39B could also be used for commercial partners as well as the Vehicle Assembly Building.

Work is nearly complete on both of these projects at Kennedy Space Center. But as a whole, the transition from Shuttle to SLS hasn’t been as smooth. The program has evolved as the presidential administrations have changed, and while the current administration has set broad space exploration goals, the Trump White House has yet to name a permanent head of NASA.

Budget constraints and technical issues have also pushed the first launch of the Space Launch System back until at least 2019. That mission will launch Orion capsule, without a crew, and sling-shot it around the moon.

But despite budgetary tie-ups and political uncertainty, Regina Spellman continues overseeing the final projects back at the pad. Her view each day is of the Atlantic ocean and other than the sounds of the construction equipment, it’s quiet.

“You think about those astronauts as they step into the capsule, they’re going to take one last breath of fresh air and look at the ocean and look at all the green because it’s going to be a long time until they see it again,” she said from the launch pad, looking out into the Atlantic Ocean.

For the first astronauts launching into deep space from this pad, it will be the last view they see of Earth for a long time.