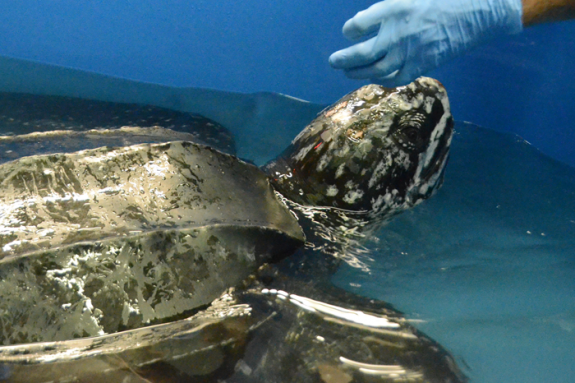 The staff of the Sea Turtle Hospital at the South Carolina Aquarium named a stranded leatherback turtle Yawkey, after the area it was found stranded Saturday.

A 475-pound leatherback sea turtle that was rescued from a remote beach in South Carolina was returned to the ocean Thursday, after being found stranded ashore and nursed back to health. It took five people to carry the creature, officials say.

The turtle “immediately responded to treatments” of fluids, vitamins and antibiotics after it was rescued Saturday, says spokeswoman Kate Dittloff of the South Carolina Aquarium.

A gender can’t be determined for the turtle: Despite its size, it’s still too young to have a mature reproductive system. It is believed to be about 10 to 15 years old. Mature leatherbacks can reach sizes of up to around 2,000 pounds.

The release ends a rare visit ashore by a leatherback, the world’s largest turtle — and one of the largest reptiles. Leatherbacks commonly migrate along the Atlantic Coast, but they usually make the trip much farther out from the coast.

The turtle’s recovery has the aquarium’s staff “beyond excited,” Dittloff says.

Researchers at the aquarium say they acclimated the turtle to the current coastal temperature of 58 degrees by cooling down the water in its tank.

“Despite being cold-blooded reptiles, leatherback sea turtles can generate some body heat and can endure much cooler temperatures than other sea turtle species,” Dittloff says.

The staff of the aquarium’s Sea Turtle Hospital named the turtle Yawkey, after the area it was spotted in near Georgetown, S.C. It was transported to the aquarium in Charleston, about an hour away. The organization cared for the turtle with help from the South Carolina Department of Natural Resources.

There have reportedly only been a handful of live rescues of a leatherback sea turtle in the U.S. Here are more facts that help explain why the aquarium’s staff was so excited to observe and save one of the creatures: