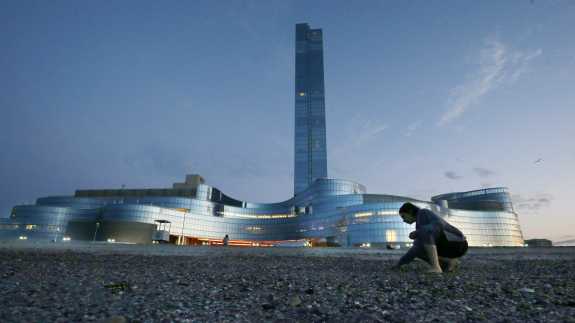 A woman gathers shells along the ocean near the Revel Hotel Casino in Atlantic City, N.J., early Tuesday. The casino resort has closed, a little over two years after opening with the promise of helping to renew Atlantic City.
Image credit: Mel Evans

After operating for only two years, the Revel Casino Hotel has closed down, part of a trend that will reportedly shutter a third of Atlantic City’s big gambling halls by the end of September. It cost $2.4 billion to build the Revel facility.

“It’s a tragedy,” massage therapist Lori Bacum, who worked at the resort’s spa, tells NJ.com. “There were some warnings, but none of us thought it would happen. We felt so safe, because this was the place that was going to take (the city) to a new level.”

“By mid-September, four of Atlantic City’s 12 casinos will have closed, but none will be a costlier failure than Revel.

“It started construction just before the Great Recession hit and had to take on so much debt it never could turn a profit.

“The Showboat closed on Sunday, Trump Plaza is closing Sept. 16, and the Atlantic Club closed in January.”

The closures come as casinos in Atlantic City and surrounding areas struggle to attract customers in a region that’s becoming saturated with gambling options — as NPR’s David Greene reports for today’s Morning Edition.

The arrival of new casinos in cities such as Philadelphia and Pittsburgh – and Baltimore, where Maryland’s fifth casino recently opened — is giving gamblers more options. And that makes it harder for any one town to attract customers from miles around.

“Pennsylvania is a terrific example,” Suzette Parmley of The Philadelphia Inquirer tells David. She says the casinos are expected to bring money pouring into resources for senior citizens and boosting tax revenue.

“From 2012 to 2013, it was booming – billions of dollars coming into Pennsylvania,” Parmley says. But now, she adds, “Pennsylvania has already flattened out; it’s actually on a slight decrease this year in revenue, from last year. It’s still making a lot, but already the trajectory is going downward because you have Maryland in the mix now, you have Ohio in the mix.”

In Atlantic City, Revel opened in April of 2012; its owners twice sought bankruptcy protection. The last hotel guests left Monday. And by Tuesday morning, workers had removed the resort’s name and put up a yellow chain to block access.

“At the end of the month, some 6,500 jobs will have been lost” in Atlantic City, David says.

“The idea behind Revel was to open a totally different resort, a seaside pleasure palace that just happened to have a casino as one of its features. That included Atlantic City’s only total smoking ban, which alienated many gamblers; the lack of a buffet and daily bus trips to and from the casino; and the absence of a players’ club. By the time those decisions were reversed, it was already too late. High room and restaurant prices hurt, too.”