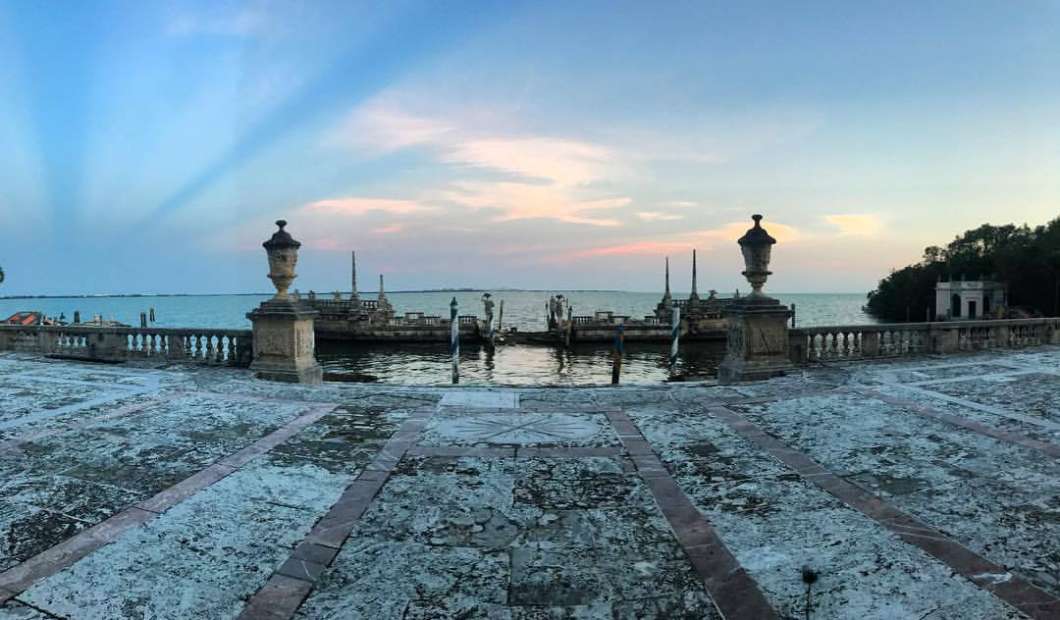 For decades, the Vizcaya Museum and Gardens in Miami has been a favorite spot for South Floridians to get engaged, get married, and have their quinceañera photos taken. But the meticulously landscaped 50 acres were seriously damaged by Hurricane Irma, and now staffers and volunteers are working to restore this picturesque spot.
Image credit: Anderson Gonzalez

With its pink stucco walls and massive coral stone terraces, the Vizcaya Museum & Gardens is a beloved South Florida landmark that has drawn Miamians for 60 years. But since getting blasted by Hurricane Irma, the estate more resembles the part in the fairy tale after an evil spell is cast, and the forest overgrows the castle.

Downed mangroves, palms, live oaks and gumbo limbos lie everywhere — all part of the lush native forest surrounding this Italianate villa perched on the bay. Their shattered branches still impede the drive to the mansion and grounds.

“You couldn’t even get through here four days ago,” says Charlotte Donn, marketing and public affairs director at Vizcaya. She’s been cutting up branches, carting them off and escorting visitors to see the damage.

“Arriving here for the first time [after the storm], I was shell-shocked,” says Joel Hoffman, the museum’s executive director. “We encountered just cataclysmic destruction — enormous tree damage throughout.”

Except for a flooded shop and café in the basement, the palatial villa itself was not badly damaged, nor were the dozens of statues scattered across its remarkably picturesque 50 acres. “Thousands upon thousands of young women have had their quinceañera pictures here,” Hoffman says. Movies and videos have been filmed here, and plenty of South Floridians head to the gardens to propose marriage and to wed.

“I love this place,” says David Salinas, a nursing school student at Miami-Dade College who’s volunteering for a few hours before class. Friendly and stocky, with a bushy black beard, Salinas was dubbed “Superman” by the other volunteers for his speed and strength in carrying trashcans stuffed with seaweed (to be returned to the ocean) or hurricane trash (to be sent to the dump).

“I’m from Miami,” Salinas says. “I’m a local, so I always visited the gardens growing up. … It’s the best picnic spot in Miami. One hundred percent.”

No one will be picnicking here anytime soon. Vizcaya staff is still trying to assess the extent of the damage. Just carting away the trash will cost hundreds of thousands of dollars, Hoffman estimates.

When you walk through the once-meticulously-landscaped formal gardens, it looks as if the storm flung dumpsters of filthy compost all over them. Vizcaya’s horticultural director Ian Simpkins says the gardens were swamped by the storm and it will take a long time to recover from the deluge of sea water and garbage.

“You can imagine what it smells like now,” he says. “It’s a combination of sewage, dead fish, seaweed … it’s quite an interesting smell.”

The smell of horticultural heartbreak, perhaps. But the staffers at Vizcaya say that heartbreak has been mitigated by all the volunteers. More than 100 just last weekend represented a cross-section of Miamians, showing up, raking seaweed, clearing downed trees and picking up all the trash.