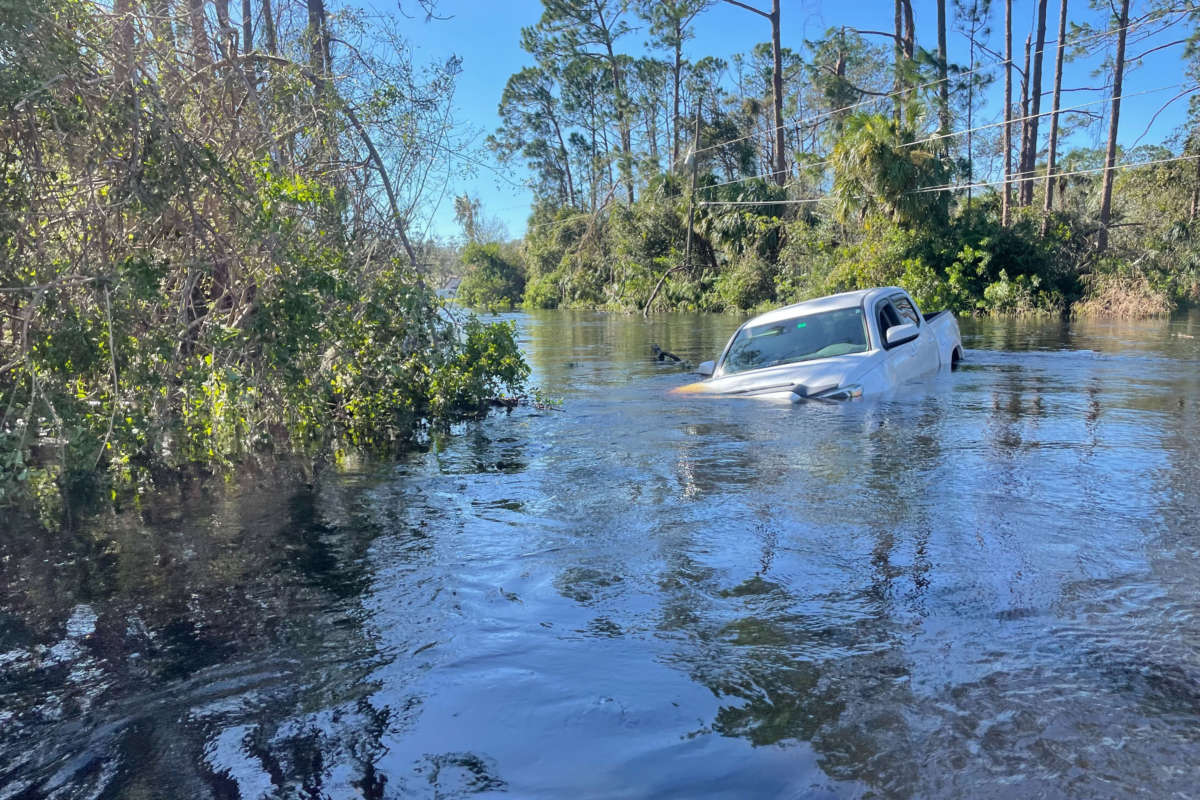 NORTH PORT, Fla. (AP) — As Hurricane Ian ravaged coastal towns in southwest Florida, residents in this quiet suburb thought they would be safe, having no beach and living outside areas under evacuation orders. But then the water kept flowing in.

Since Ian’s passage, water levels have gone up significantly, turning roads into canals, reaching mailboxes, flooding SUVs and trucks, blocking the main access to a an interstate highway and leaving families trapped in their waterlogged homes. Now, as days go by, residents here in the Sarasota suburb of North Point are beginning to run out of food and water.

“Water just keeps going up. Who knows when it is going to stop,” said Samuel Almanzar, 42. He was rescued by crews Friday along with his father, wife and two children, 11 and 6.

As rescue efforts wrapped up Friday, local officials recommended people whose neighborhoods are flooding to evacuate. They said waters in some areas will continue to rise over the next two days.

The floods in North Port show the impact of Ian has not been confined to the beaches and tourist towns. The heavy rains from the storm have ended up flowing into suburban and inland towns not part of hurricane warnings.

It’s the rising rivers that do it because of the hurricane’s deluge, which continues to cause havoc long after the winds have passed. And it’s leading to rescue efforts not that different from those on the coasts.

Floods were reported all across the center of the state: around Orlando and its theme parks, south to Kissimmee, east to Daytona Beach, Arcadia cattle country. People near rivers were deeply affected.

Near North Port, the Florida Department of Transportation closed a stretch of Interstate 75 in both directions late Friday because of the flooded Myakka River.

Dozens of National Guardsmen arrived earlier Friday in North Port— about 85 miles (140 kilometers) south of Tampa — to speed up efforts started Wednesday by firefighters from other states and counties. And city officials were scrambling to open an evacuation center at a high school.

A mother of two cried on the phone, trying to connect with her parents so they could pick them up after coming out of her flooded neighborhood. A woman showed a map to rescuers to reach families with children in the area upon learning water had started to rise inside their homes. A man waded through waist-deep waters with his 8-year-old daughter, trying to venture out to get supplies.

Megan Blevins, who works at a restaurant in nearby Venice, was trying to help the families of coworkers get out but said some were not accessible due to structures collapsing and leaving certain streets without access.

Aimee Bowden, 47, said a tree fell on her house, opening a hole in her kitchen and dining room and letting water pour in. Firefighters going back and forth to pick up families with children evacuated her, with her husband and 13-year-old son in a rescue boat.

“I was terrified. You have your whole life uprooted,” Bowden said. “You try to just keep thinking about what you need to do.”

Just west of North Port, the Myakka River was forecast by the National Weather Service to reach record flood stage Friday at 12.55 feet (3.8 meters) and then crest a bit higher before receding.

The nearby Peace River was set to hit an even higher mark: almost 24 feet (7.3 meters), which is about twice the previous record. It runs through mainly rural areas, especially the cattle town of Arcadia which is home to a well-known Florida rodeo.

There was plenty of concern Friday about the steadily rising river.

“The unpredictability of the river is real, and people are in real danger,” said DeSoto County Fire Chief Chad Jorgensen in a county post. “If you are in these areas, you need to get out now.”

After crossing Florida, Ian moved over the Atlantic Ocean where it curved back into South Carolina on Friday. More than two dozen deaths have been blamed on the storm.

Elvis Padron, 40, a construction worker now applying for political asylum, fled Venezuela with his wife and 8-year-old daughter and crossed the U.S.-Mexico border in February, only to face more hardship.

“My wife refuses to leave. She wants to stay,” said Padron, who waded through the waters to find more supplies and tried to convince his wife on the phone they should leave. “I feel like we don’t have much time left.”