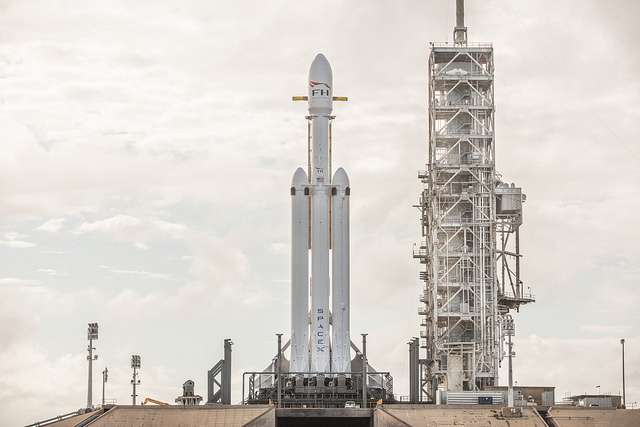 SpaceX's Falcon Heavy sits on the pad ahead of its maiden launch. Photo: SpaceX

Now that SpaceX successfully launched a Falcon 9 rocket carrying a communications satellite for Luxembourg, it’s time for the private space company to focus on its next rocket the Falcon Heavy.

Wednesday’s launch from Cape Canaveral sent Gov-Sat 1 into orbit. The government of Luxemburg teamed up with Luxemburg-based satellite operator SES for this payload described as a new concept for secure satellite communications.

This is the second time this rocket booster launched a payload. It previously ferried a satellite for the National Reconnaissance Office. SpaceX recovered the booster for launch Wednesday, however it was the booster’s last mission. The first stage was discarded at sea.

The mission’s success clears the way for SpaceX’s Falcon Heavy, embarking on its maiden flight from Kennedy Space Center’s Launch Complex 39A. The company’s heavy-lift rocket is made up of three Falcon 9 booster “cores” that are strapped together. The rocket’s 27 engines will fire almost simultaneously to provide more than five million pounds of thrust.

According to SpaceX, Falcon Heavy will be the most powerful operational rocket in the world capable of sending 119,000 pounds into orbit at a cost of $90 million. Launch competitor United Launch Alliance’s  Delta IV Heavy can send up to 62,540 pounds of payload into orbit. According to a recent report published by the Government Accountability Office, ULA’s Delta IV Medium/Heavy heavy-lift rocket costs between $164-400 million per launch.

The Falcon Heavy has yet to leave the ground, but SpaceX plans to change that. All this month, ground crews at the launch pad have been practicing for the maiden flight in what’s known as “Wet Dress Rehearsals” — practicing all the aspects of a launch with the rocket safely strapped down to the pad. Last week, SpaceX concluded one of those rehearsals with a crucial test firing of all 27 engines.

Now it’s time for the real deal. Founder Elon Musk announced the company is targeting Tuesday, February 6 for the rocket’s maiden flight. Since the launch is a demonstration, there will be no actual payload on board. Instead, Musk said he’s strapping a car, his cherry red Tesla Roadster, to the top on the rocket and launching it at Mars.

Musk has downplayed the first launch of the Falcon Heavy rocket. At the International Space Station Research and Development conference in Washington, D.C. last summer, Musk said there was a “good chance” the vehicle didn’t make it into space.

If all does go well, SpaceX plans to land the three core boosters like it does for many launches. The two side boosters will make their way back to Cape Canaveral to SpaceX’s Landing Zone 1. The middle core will attempt to touch down on a barge in the Atlantic Ocean. Two two side boosters will cause multiple sonic booms that may be heard by residents on Florida’s space coast.

Many will be watching the demonstration flight, from future customers to SpaceX fans from across the globe. SpaceX has a handful of  customers lined up for launches on the heavy lift vehicle including Bill Nye the Science Guy. Nye, the CEO of the nonprofit Planetary Society, will be watching from Cape Canaveral. The Planetary Society will be sending an experimental propulsion system called LightSail 2 on a future Falcon Heavy launch.

The Kennedy Space Center Visitor Complex is offering multiple launch viewing opportunities, although tickets to view the launch from the closest public spot have sold out. Spectators can watch the launch from many places along the space coast, including public beaches and parks. With three boosters and 27 engines, the Falcon Heavy will be hard to miss when it finally lifts off.