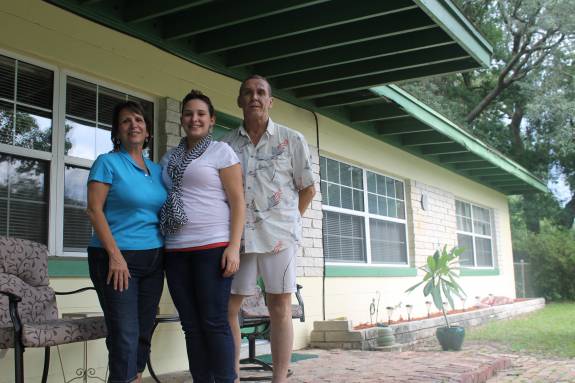 Photo: The Kelloggs say more resources would have helped them. They found the system bewildering to navigate, and many programs in place today for struggling homeowners weren't available then. By Amy Green.

August 6, 2014 | WMFE, Orlando – Five years after the end of the worst recession in a generation, no region is more troubled by foreclosures than Central Florida.

The crisis is resolving in most of the rest of the country. But here, where houses continue to go up for auction, families left homeless by foreclosure face a long recovery.

The Kelloggs are one of those families.

Paul Kellogg and his wife Judie moved in to their new home about a year ago with their two children, 21-year-old Dominique and 18-year-old Raymond.

Paul is a civil engineer who was designing subdivisions when he lost his job in 2009. A year later the bank foreclosed on the Sanford home where the family had lived for 15 years. It was the only home the children ever had known.

After losing the house the Kelloggs lived with friends and family and in a trailer their church owns before renting this three-bedroom Lake Mary home from their church.

Judie says her favorite thing about the house is “the stability. The church isn’t going to kick us out.”

Nationwide foreclosure activity is declining to rates not seen since before the housing collapse began in 2006. But in Central Florida rates continue to rank among the nation’s worst. The problem extends from Orlando to Melbourne, Daytona Beach, Ocala and Lakeland.

The recovery has been slower here because Florida is one of 24 states where foreclosures go through the courts.

Meanwhile homelessness in Central Florida is surging. Orange County leads the state in the number of public school students who are homeless, more than 7,000.

Brent Trotter, who leads the Coalition for the Homeless of Central Florida, says there’s a family behind each of those children.

He says most at risk are low-income renters who are evicted after their landlords fall delinquent. Often they don’t know their rights, lack resources for a deposit on a new place and have nowhere to go.

Renters and homeowners displaced by foreclosure in Florida face an increasingly unaffordable rental market. Erik Braun of the state Department of Children and Families’ Office on Homelessness says at a time when wages are declining rents are rising.

Judie Kellogg’s lowest point came while she was on the phone one day inquiring about food stamps. She was in her car, and it was pouring rain.

“The lady goes, Well, are you homeless? And I said, Excuse me? And she said, Well, let me give you the definition of homeless. You don’t own anything. You don’t have a permeant residence.”

That’s when it hit her.

“And I said, Well, I guess I’m homeless. I’m sitting in my car with pretty much everything I own, and I don’t know how long I’m going to be able to stay where I’m at. So yes, I’m homeless.”

The Kelloggs say they found the system bewildering to navigate. They didn’t know about many programs, and their bank was unwilling to work with them.

They describe their situation as teetering. They still lack savings for college for their children, retirement and a deposit on a new house if they need to move again.

As their old home, it sold at auction for one dollar.