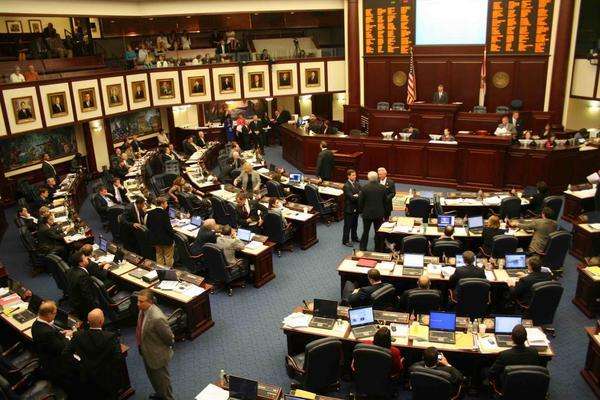 The Florida Legislature via News Service of Florida

After a long and fiery debate about how the state should deal with illegal immigration, the Florida House on Wednesday passed legislation that seeks to crack down on local governments that do not fully cooperate with federal immigration authorities.

The measure, if passed by the Senate and signed into law by Gov. Ron DeSantis, would ban so-called sanctuary city policies in the state and punish any local officials who limit cooperation with federal immigration authorities. That would include local governments that restrict law-enforcement agencies from participating in a federal program that deputizes local officers to perform the duties of federal immigration agents.

If they are found to be in violation of the bill, local officials could be removed from office, and local governments could be fined up to $5,000 for each day they have sanctuary-city policies.

“The state should welcome immigrants, but it should be legal immigrants,” said Rep. Mike Beltran, R-Lithia. “We are not saying that illegal immigrants are bad people … but they need to follow the law.”

But Democrats criticized the bill in often-emotional testimony that sometimes included accounts about how their families immigrated to the United States.

“This bill is not who we are as Floridians,” Rep. Carlos Guillermo Smith, D-Orlando, said.

In part, Democrats said the bill would not just target undocumented immigrants who commit violent crimes but also minor crimes, like driving without a license.

Rep. Dotie Joseph, D-North Miami, said the bill would hurt the trust between law enforcement and immigrant communities, which she said would “make all of Florida’s families unsafe.”

Rep. John Cortes, a Kissimmee Democrat who worked as a corrections officer, said he supports locking up immigrants who commit crimes but that non-criminals also likely would be targeted. He added that there would be a cost to taxpayers for holding immigrants on federal immigration detainers.

Despite the pushback, the bill passed the House in a 69-47 vote along almost-straight party lines. Republicans Vance Aloupis of Miami and Rene Plasencia of Orlando joined Democrats in voting against the bill.

The House has passed similar bills the past three years, but the Senate has not gone along. A Senate version (SB 168), however, is scheduled to be heard Thursday on the Senate floor.

Sen. Joe Gruters, who also serves as chairman of the Republican Party of Florida, has made the issue his top priority in the Senate.

If a sanctuary-cities bill ultimately passes, the Republican-dominated Legislature would hand DeSantis a major win during his first year in office.

During his campaign last year, DeSantis vowed to sign legislation cracking down on sanctuary cities. His tough stance on illegal immigration mirrored the arguments embraced by President Donald Trump, who endorsed DeSantis for governor.