After Falwell’s Departure, Liberty Students Worry About Their School And Their Faith 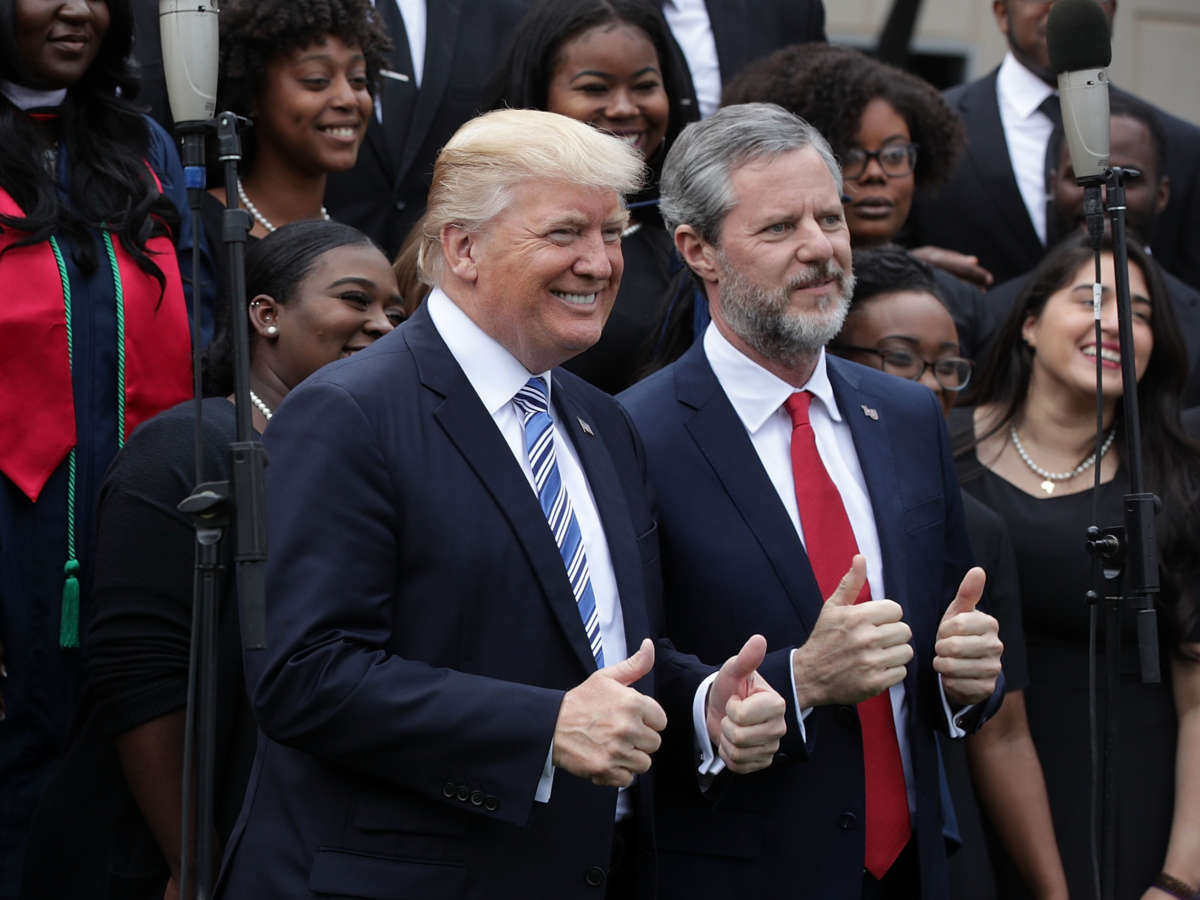 Students at Liberty University are returning to school in Lynchburg, Va., in the coming days in the midst of a pandemic, a contentious presidential election and tumult on their campus.

The conservative Christian college is now under new leadership after President Jerry Falwell Jr. agreed to take an indefinite leave of absence this month following a series of scandals that culminated with a controversial vacation photo posted online.

Liberty has long been at the center of white evangelical political activism, and Falwell has been a leading evangelical supporter of President Trump. Some students said they’re feeling conflicted about both leaders.

Like his father, the late Rev. Jerry Falwell Sr., the younger Falwell has been a vocal supporter of Republican politics. But he’s been known more for his business acumen than for his religious devotion.

“His father worked so hard to build a legacy,” said Caroline Reinhart, 21, a rising senior from Ohio who’s studying government at Liberty. “One person’s actions are threatening that, and I think that’s very sad.”

Reinhart said she was pleased to see Falwell go after a series of high-profile scandals, including certain business deals and accusations of racial insensitivity.

He agreed to an indefinite leave of absence after he shared a vacation photo on Instagram that showed him with his pants unzipped next to a woman who was not his wife. Her shorts also were unzipped.

Falwell recently told a local radio station, WLNI, that the photo was taken in “good fun” and that the woman was his wife’s assistant, and she couldn’t zip up her pants because she’s pregnant.

“I’ve apologized to everybody, and I promised my kids I’m gonna try to be a good boy from here on out,” Falwell said in the interview.

Falwell has not responded to requests for comment from NPR, and Liberty University has declined requests for interviews with Falwell and the interim president, Jerry Prevo.

It’s not clear whether Falwell will return, but Reinhart worries he’s sullying the reputation not just of Liberty – but also of her faith.

“If what he says and does, does not demonstrate good Christian values – or what Christians say are their values, then that will affect our witness, and hurt our witness,” Reinhart said, referring to the belief that Christians should live out their faith in a visible way that will encourage others to believe in salvation through Jesus.

Reinhart also is concerned about Falwell’s prominent support for Trump.

“I think at times he presents himself in a way that suggests that he almost sees Trump as an idol. … I think he just excuses everything that goes on, and that’s not acceptable,” Reinhart said.

Still, Reinhart said she’s leaning toward voting for Trump because she aligns with many of his policy positions.

Nick Nary, 20, a Liberty senior from Bent Mountain, Va., has similar concerns about Falwell.

“It just feels like he’s just clowning around,” Nary said. “At some point it doesn’t really feel like he acknowledges or understands the full weight of his actions.”

Like Reinhart, Nary often dislikes the way Trump talks or tweets; he said “tearing other people down” is not in line with his view of Christian values. But Nary said he plans to vote for Trump in November for policy reasons.

Even so, Nary worries about what Falwell’s behavior, and vocal support for Trump, will mean for Liberty graduates.

“If someone graduates [from] Liberty University and they’re going out to an employer and they don’t want to hire them because of Jerry Falwell Jr.’s antics,” Nary said, “I would hate that to be associated with someone’s character, because they might have had 50 million other reasons they went to Liberty.”

As the son of a faculty member at Liberty, Isaac Liu has lived in the Lynchburg area since high school. He’s now a junior there studying mechanical engineering.

“I think Falwell ultimately is a symptom of [the problem in] the modern-day evangelical movement in America,” Liu said.

Liu said he was pleased to see Falwell ousted – at least for now – but that alone will not solve what he sees as larger problems at Liberty, and in evangelical Christianity as a whole.

Liu, who supports former Vice President Joe Biden, said many of his friends on campus are put off by the association with Trump.

There is some change within evangelicalism, said Michele Margolis, a political scientist at the University of Pennsylvania.

Young white evangelicals are more progressive on issues such as immigration and LGBTQ rights, for example.

But as a whole, Margolis said, evangelicals younger than 29 don’t seem to be moving away from the Republican politics of their parents and grandparents in large numbers.

“These folks look like [people] 65-plus on certain issues. … They are still far more conservative than their nonevangelical counterparts at their age,” Margolis said.

Margolis said there’s evidence that young evangelicals with more progressive beliefs may be leaving their faith, but those who stay aren’t dramatically changing their politics.

As for Liberty students such as Reinhart, it’s a similar story.

“I wouldn’t leave a school I love just because one man can’t behave,” she said.