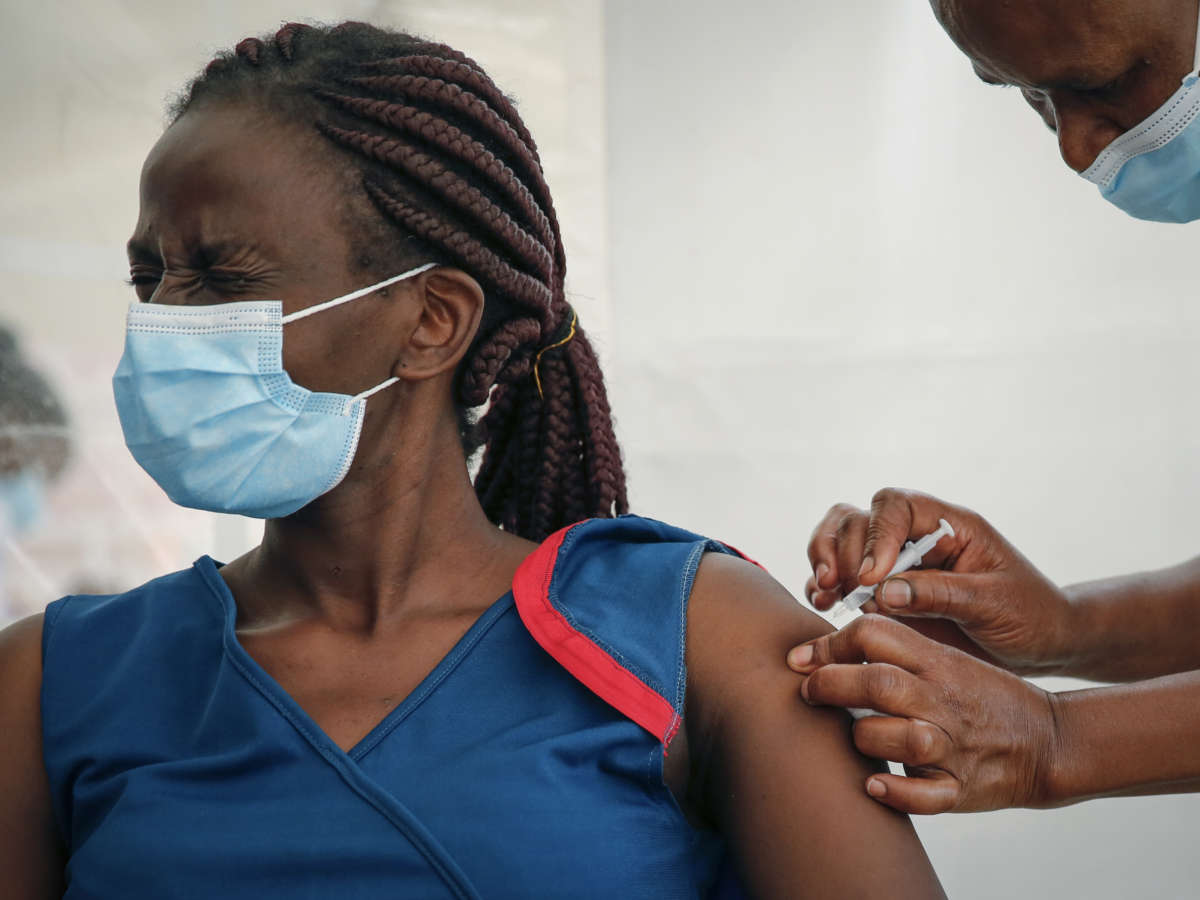 A front-line worker in Kenya receives a shot of the AstraZeneca COVID-19 vaccine. African Families for Holistic Health Organization in Portland, Ore., hopes that the work they do in the U.S. will help curb vaccine misinformation back in Africa.
Image credit: Brian Inganga

Switching between Swahili and English, Dr. Frank Minja asked the African immigrants on the Zoom call if they had any questions about the COVID-19 vaccine.

Minja, who is originally from Tanzania, was asked how to get the vaccine, how it works, whether it’s safe.

Then one person asked him about a video promoting the conspiracy theory that the vaccine is part of a plot to reduce the Black race.

“That’s the realm of nonsense and misinformation,” he said.

Minja’s Q & A was hosted by the organization, African Family Holistic Health Organization (AFHHO), in Portland, Oregon. It’s one of a number of grassroots organizations across the country that are helping Africans in the U.S. get vaccinated.

In the United States, skepticism about the vaccine can be found in all segments of the population, including African Americans. However, efforts to address hesitancy among Black people often overlook African immigrants, who get much of their information from their countries of origin.

Minja has been paying close attention to threads of COVID-19 disinformation coming from Africa.

“We’ve seen the whole gamut of misinformation that basically started with the fact that Africans and people of African ancestry are not susceptible to COVID,” he said in an interview following the Zoom session.

Minja said many African immigrants do not rely on American media as trusted sources of information. Some do not speak English well enough yet. Others are used to getting information from friends and family back home through social media platforms, such as WhatsApp.

Chioma Nnaji, a health worker and community organizer for African immigrants and the wider Black community in Massachusetts, said it’s important to take into account that “certain communities live and operate in two spaces.”

“This is usually applicable to immigrants and refugees where they still have connections to their home countries while they are resettling in a new country,” she added.

A lot of what they hear from back home is helpful, she said. For example, traditional herbal remedies are popular. Minja said those can be useful for treating symptoms of non-severe forms of COVID-19.

However, there’s also quite a bit of misleading information about the vaccine that is spread through these channels, Minja said.

“And a lot of it is really about just planting the seeds of distrust,” he said.

For African immigrants, the distrust is partly rooted in the memory of being exploited by western countries, said Dr. Ifeanyi Nsofor. He’s a global health expert from Nigeria, who has also been battling vaccine misinformation on the continent.

“It’s almost like anything that you say is coming from the white man, people look at it with lots of suspicion, based on that experience of colonialism,” he said.

And that experience did not end with independence. Over the years, global health advocates have accused multinational pharmaceutical firms of using African countries as living laboratories for clinical trials of experimental drugs. In 1996, 11 children died and dozens were left disabled in Nigeria after being given an experimental anti-meningitis drug created by Pfizer — the developer of one of the COVID vaccines.

A year later, the U.S. government was accused sponsoring studies that gave pregnant women in developing countries a placebo during tests of the effectiveness of an antiviral drug for HIV.

And in April 2020, two French doctors sparked outrage when they suggested that a potential treatment for COVID-19 should be tested in Africa. The director of the World Health Organization, Tedros Adhanom Ghebreyesus, condemned the suggestion as a “hangover from a colonial mentality.”

“All this fear comes from a history,” said Haika Mushi, a health worker at AFHHO. She is also originally from Tanzania and moved to the U.S. 12 years ago. She has been helping organize the group’s Zoom calls since the pandemic began.

When the vaccine became available, AFHHO started helping people sign up for appointments. At first, it brought in a white doctor to answer questions, and people were still skeptical. She says the group had more success when it brought in Minja and a doctor from Zimbabwe. They also have translators speaking French, Swahili and Tigrinya.

“It makes sense to hear from our own,” she said.

Another type of disinformation that is being spread, according to Nnaji, is that immigration status affects a person’s ability to get the vaccine. She says that is why community-based organizations who can help people sign up for vaccinations, such as AFHHO, are so important.

AFHHO hopes that its sessions will also help curb disinformation in the countries of origin, too.

“We feel like if the people here are well enough educated about the vaccine, they will be able to educate our families back home — our friends, neighbors back home,” Mushi said.