Afghan Girls Robotics Team: ‘We Have A Duty To Protect Them’ 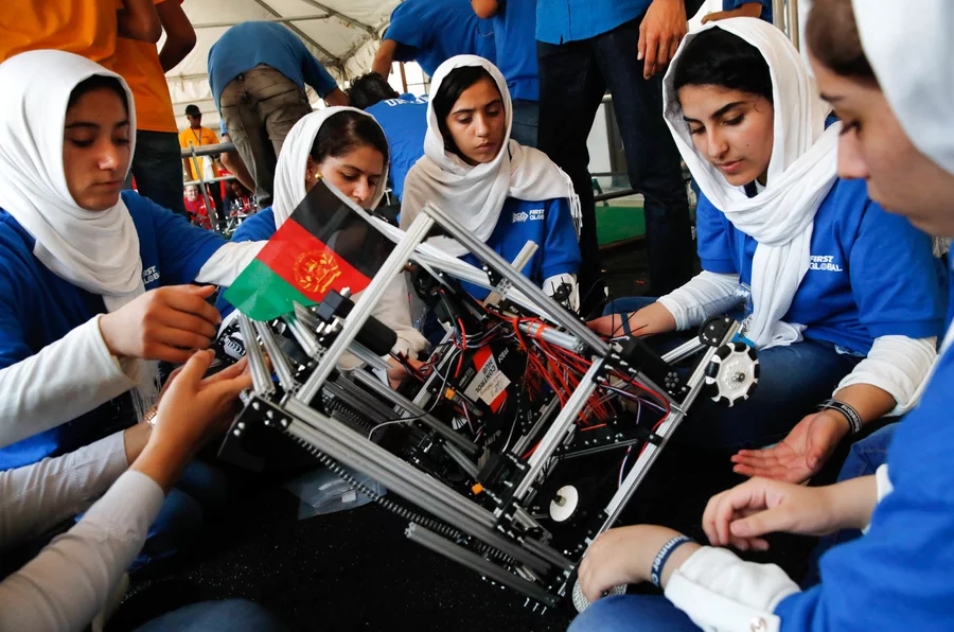 The Afghan Girls Robotics Team made headlines in 2017 when they came to Washington for an international competition just a few blocks from the White House.

Most members of the team were born after the Taliban were ousted from power in 2001, symbolizing a new Afghanistan where girls were free to go to school and women were getting at least some opportunities that had been long denied.

But with the Taliban back, the future of these girls — some of them now young women — has turned precarious.

Kimberly Motley, a U.S. lawyer who has represented them for years, says she’s in close touch with the girls and their families. But she did not want to publicly discuss their locations or plans because she said she feared for their safety inside Afghanistan.

“We’re hopeful that they’re safe. But we’re really concerned with the reports that we’re seeing,” Motley said in an interview from Charlotte, N.C.

The New York Times reported Thursday that some of the girls made it out of Kabul on a flight to Qatar, while others were still inside the country.

The team was formed in the western city of Herat in 2017 by Roya Mahboob, an Afghan tech entrepreneur who heads the Digital Citizen Fund, a group that runs STEM classes for girls. The team had about a dozen members initially and it has grown to more than 20.

The girls applied to come to the Washington competition that included teams from more than 160 countries. But they could not initially obtain U.S. visas until their plight became public and then-president Donald Trump intervened.

They returned to a hero’s welcome in Afghanistan, though the brutal reality of Afghanistan’s war soon intervened. Just two weeks after the competition, the father of one girl on the team was killed in a bomb blast at a mosque that claimed more than 30 lives.

Motley has been working in Afghanistan since 2008, often representing Afghan women and handling human rights cases.

She said the Biden administration had to know that the American withdrawal could have a damaging impact on Afghan girls and women.

“We went there and we sold them this dream of democracy and freedom. Because of that, there were millions and millions of little girls that were educated,” said Motley. “But now we’re leaving and everyone knew that this day would come.”

She’s very upset by the way President Biden talked about the Afghan military not putting up a fight. She said this ignored the battle Afghan women have been waging.

“The girls that were going to school for the last 20 years, that’s fighting. The women that are doctors, lawyers, judges, running for politics, the Afghan girls robotics team, that’s fighting,” she said. “So I’m sorry that my girls weren’t picking up AK-47s. But they were fighting, and we have a duty to protect them.”

When COVID hit last year, Afghanistan was extremely vulnerable. To cite just one example, the impoverished country had a small number of ventilators, which can cost tens of thousands of dollars.

But the robotics team, also known as the Afghan Dreamers, reached out to MIT, which helped come up with a design to build ventilators from scratch. The girls relied on used parts from Toyota Corollas and put together a prototype that cost just a few hundred dollars to make.

Girls were barred from school and women from the workplace. Women were only allowed in public when escorted by a male relative, and had to remain fully covered, peering out through a mesh face covering.

Motley said she’s getting desperate, anguished phone calls every day, and many women are already feeling squeezed, even though the Taliban have not established formal policies.

She finds the images from Kabul very telling. She said the crowds on the streets and at the airport are made up almost exclusively of men. There were many more women visible just a few days ago, before the Taliban took control, she added.

The U.S., the European Union and 20 other nations issued a joint statement Wednesday saying, “We are deeply worried about Afghan women and girls, their rights to education, work and freedom of movement. We call on those in positions of power and authority across Afghanistan to guarantee their protection.”