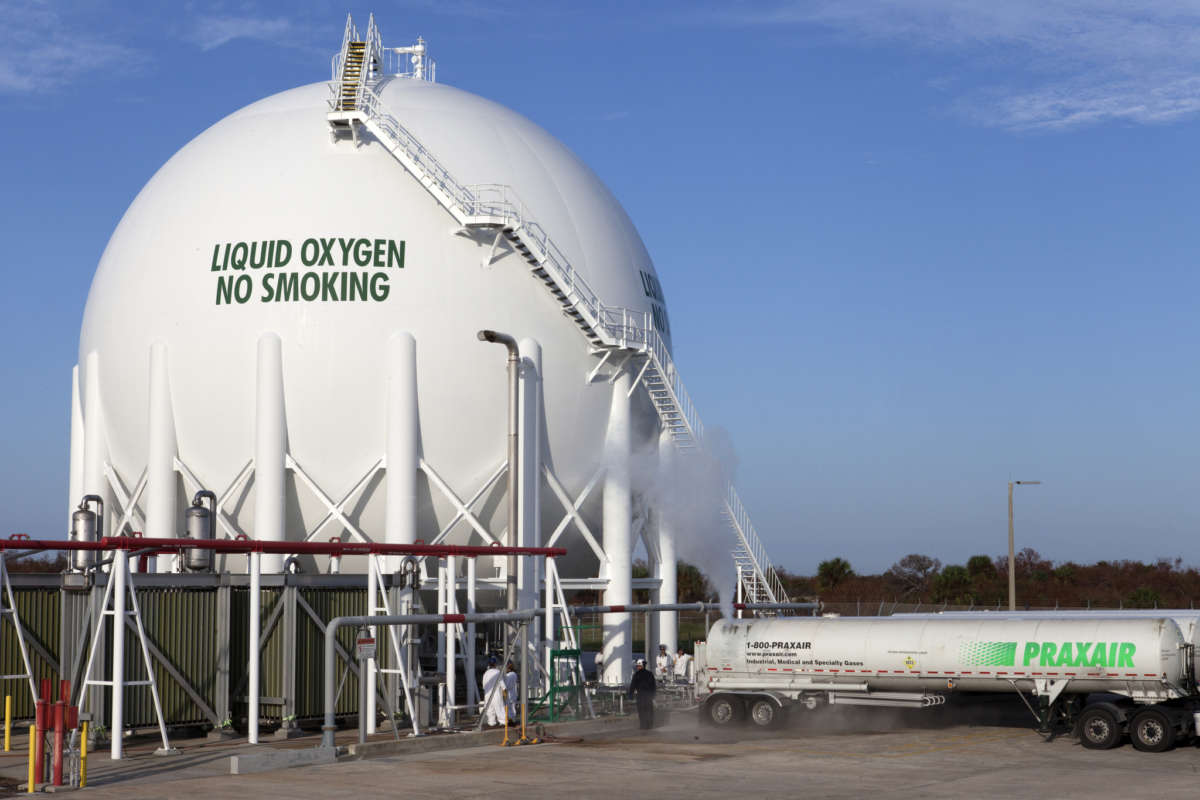 Several Praxair trucks carrying their loads of liquid oxygen, or LO2, arrived at Launch Pad 39B at NASA’s Kennedy Space Center in Florida. A mist is visible as LO2 is offloaded from one of the trucks into the giant storage sphere located at the northwest corner of the pad. Photo: NASA/Kim Shiflett

As Florida deals with another surge of covid patients, supplies of oxygen for healthcare providers are running low and the shortage is affecting other industries outside of healthcare like aerospace.

To understand why the aerospace industry relies on oxygen, we’ll need to understand some basic rocket science.

A rocket leaves the ground by burning propellant which creates thrust, a reaction called combustion which requires oxygen. Since there’s no oxygen in space, many rockets use liquid oxygen, or LOX, to help burn that propellant. Engineers cool the liquid oxygen to very low temperatures and load it up in the rocket’s fuel tanks.

“We’re actually going to be impacted this year with the lack of liquid oxygen for launch,” said SpaceX’s CEO Gwynne Shotwell. “We certainly are going to make sure hospitals have the liquid oxygen that we need. But for anybody that has liquid oxygen to spare, would you send me an email?”

Another rocket company United Launch Alliance said it’s working to source liquid oxygen for a launch next month from Vandenberg Air Force Station in California. The contractor that delivers liquid oxygen to that facility is diverting its shipments to Florida.

The USG contractor that transports liquid GN2 to VAFB is helping with the COVID related LOX effort in Florida. Working that situation now. https://t.co/sTyprcRA42

Even NASA is keeping a watchful eye on the supply issue. The agency’s next moon rocket SLS needs about 196,000 gallons of liquid oxygen for each launch attempt.

There’s about 800,000 gallons already at the launchpad at Kennedy Space Center, stored in a massive storage tank at Launch Complex 39B. NASA will need that supply for a wet dress rehearsal of the Artemis I mission — a practice run of the mission to send an uncrewed capsule to the moon and back. It will also need hundreds of thousands of gallons for the launch itself.

“Right now, we don’t have an issue,” said NASA propellent management’s Eric Dirschka. “But we’re of course sensitive to what’s going on in the marketplace and with the COVID in the hospitals. So it could become a problem.”

The oxygen shortage is affecting other industries, too. In Orlando, Mayor Buddy Dyer is urging residents to conserve water. The city’s utility company uses liquid oxygen to filter its water supply.

As covid cases continue to increase in Florida, there’s worry the supply of liquid oxygen outside of the healthcare field could run dry.