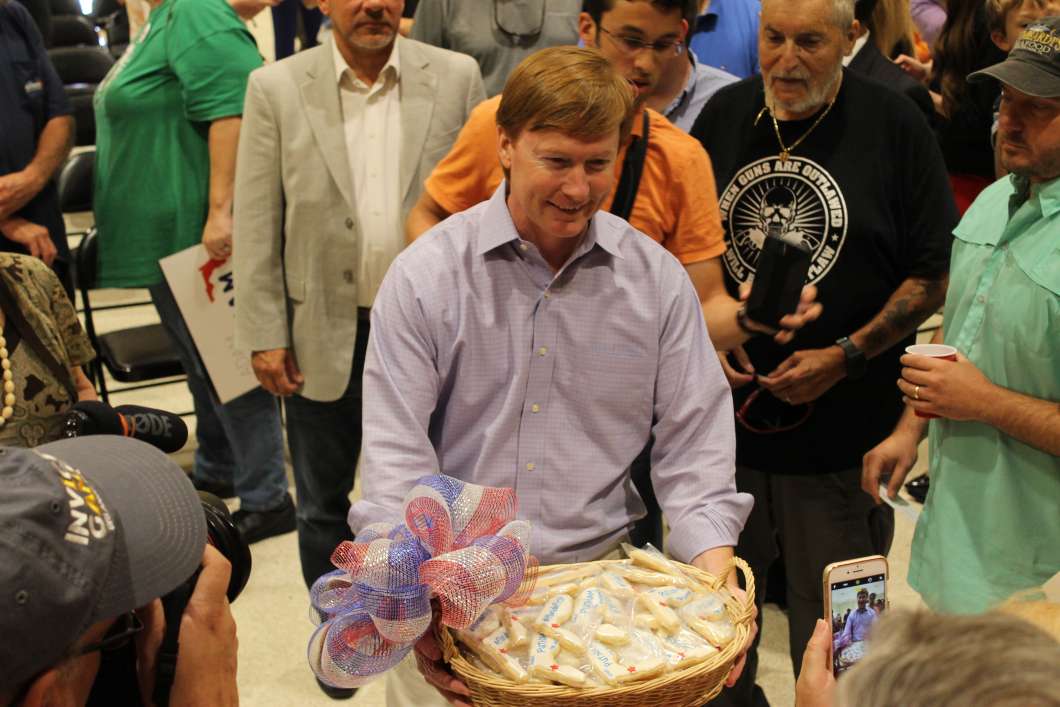 Florida agriculture commissioner Adam Putnam, who is running for Governor on the Republican ticket, holds a basket full of Florida shaped cookies at a campaign stop in Altamonte Springs. Photo: Matthew Peddie, WMFE

Putnam weighed in on the budget during a campaign stop in Altamonte Springs Tuesday. He’s part way through a bus tour of the state after launching his bid for Governor on the Republican ticket. At the Eastmonte Park community center in Altamonte Springs, he hit on campaign themes of low taxes, limited government and the importance of education. And he told reporters the budget sent to the governor’s desk may not survive the veto pen.

“Whether it’s really large important components of it like the education funding, or some of the smaller pieces of the puzzle that occupied much of the controversy like Visit Florida, there’s some really important things in that budget that have their priorities out of whack,” said Putnam.

Teachers unions and parents groups have called on Governor Scott to veto the budget, saying there isn’t enough money for K-12 education.

The governor has criticized lawmakers for cutting funding to Visit Florida and Enterprise Florida, and he hasn’t ruled out a veto.

Putnam also said it’s “frustrating” that lawmakers couldn’t agree on how to implement medical marijuana in the session that just concluded.

It’s now up to the state department of health to figure out the rules for medical marijuana use after voters approved a constitutional amendment last November.

Putnam said he would prefer lawmakers to sort out the rules.

“And my preference is that in doing so, they maintain the spirit of the constitutional amendment, but not allow it to be used as a camel’s nose under the tent for widespread de-facto recreational use of marijuana.”

Contenders for the Governor’s mansion on the Democratic side include former US Rep. Gwen Graham, Tallahassee Mayor Andrew Gillum and Orlando businessman Chris King. Orlando trial attorney John Morgan, a prominent supporter of medical marijuana, is also in the mix.