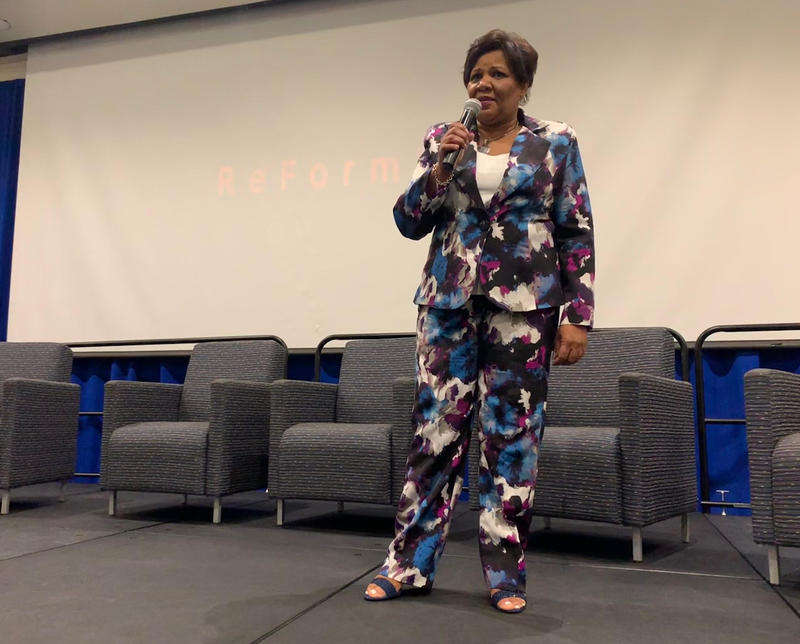 Alice Marie Johnson, who was released from prison last year after serving 20 years, speaks about the need for criminal justice reform during an event at Florida International University. NIRMAL MULAIKAL/WLRN

“Women need to be included in discussions about prison reform,” Johnson said. “For so long, women have been the forgotten ones in prison.”

She said that the treatment of incarcerated women is often harsh while the criminal justice system as a whole is “unjust rather than just.” Florida has the opportunity to lead the nation in advocating for criminal justice reform, according to Johnson.

“Florida is perfect. Some of the legislators have done great things in this state, especially with Amendment 4, and they can build on that,” she said.

“I was told I would only leave prison as a corpse,” Johnson told the crowd at the univers. “But, I’m here today and I’m breathing.”

Johnson spoke at Florida International University as part of the ReformHER Symposium series, organized by the New Florida Majority and Dignity Florida.

The symposium is part of a series of dialogues across Florida that aim to reform state legislation to “guarantee dignity for incarcerated women.”

“The goal is to highlight the need of two conversations when talking about criminal justice reform, one for men and one for women,” said Tray Johns, executive director of the New Florida Majority and organizer for the event. “We need to talk about the intersectionality of gender and mass incarceration across our country.”

Johnson said that during her incarceration, she became a model inmate and citizen. She wrote plays and became an ordained minister. Her story makes a case that prison reform is needed, she said.

“My story is out, but I continue to tell my story because it’s very important that I use the platform that has been given to me to be the voice of the women who have been left behind, who have been incarcerated, who don’t have a voice,” Johnson said.