Across Florida Residents Hold Vigils And Call For Gun Control 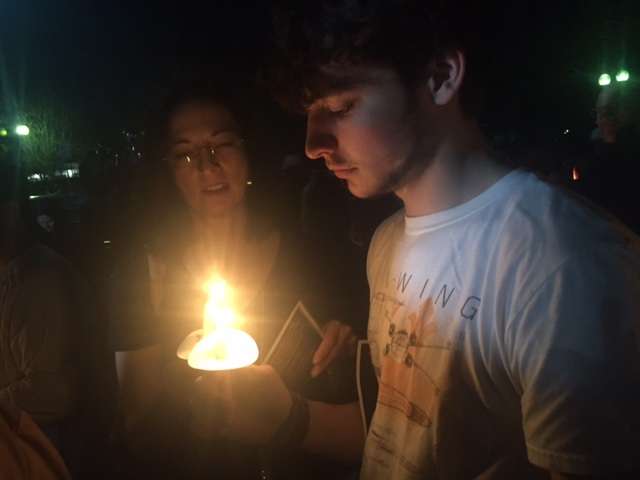 Emmy Zumwalt and her son Emerson at the vigil outside Orange County School headquarters./Photo: Catherine Welch

Dozens of reporters and cameras swarmed the students as they prepared to leave. Many of the students wore burgundy T-shirts of the school’s colors. They carried sleeping bags, pillows and luggage and hugged their parents as they loaded the bus for the 400-mile journey.

Alfonso Calderon is a 16-year-old junior. He says he hopes that the trip will start a conversation between the Legislature, Gov. Rick Scott and the students over commonsense laws on guns.

Jeff Foster teaches government at the high school, and is traveling with the students. “The goal might just be to get the ball rolling. I don’t think legislation is going to pass tomorrow, but these kids aren’t going anywhere. This could be a life mission for some of these kids.”

Listen: Teacher Jeff Foster spoke with WMFE as he drove with students to Tallahassee (Click the media player above)

The students will meet with legislators on Wednesday, asking for stricter gun laws and more support for mental health at the state level. “They lost 14 friends and three staff members,” said Foster. “They’re upset.”

Scores of people gathered in downtown Orlando Monday night for a candlelight vigil honoring those who died in the Parkland high school shooting.  It was one of more than 20 vigils organized by the Florida PTA.

7th grader Jordan Scott was there with his mom. He thinks schools have more security checks,”tell students, like keep encouraging them to not do drugs or bring any guns to school. But I think you should just check backpacks.”

Amanda Montgomery and her two sons were also at the vigil.

Students Across Florida Speak Out

Video footage taken from television news helicopter crews showed several dozen students who walked out of West Boca Raton High School on Tuesday morning, apparently bound for Marjory Stoneman Douglas High School in nearby Parkland. Many of the students were wearing their backpacks. The distance between the schools is about 11 miles (17 kilometers).

Several dozen more students gathered outside Fort Lauderdale High School, holding signs with messages that included “our blood is on your hands.”