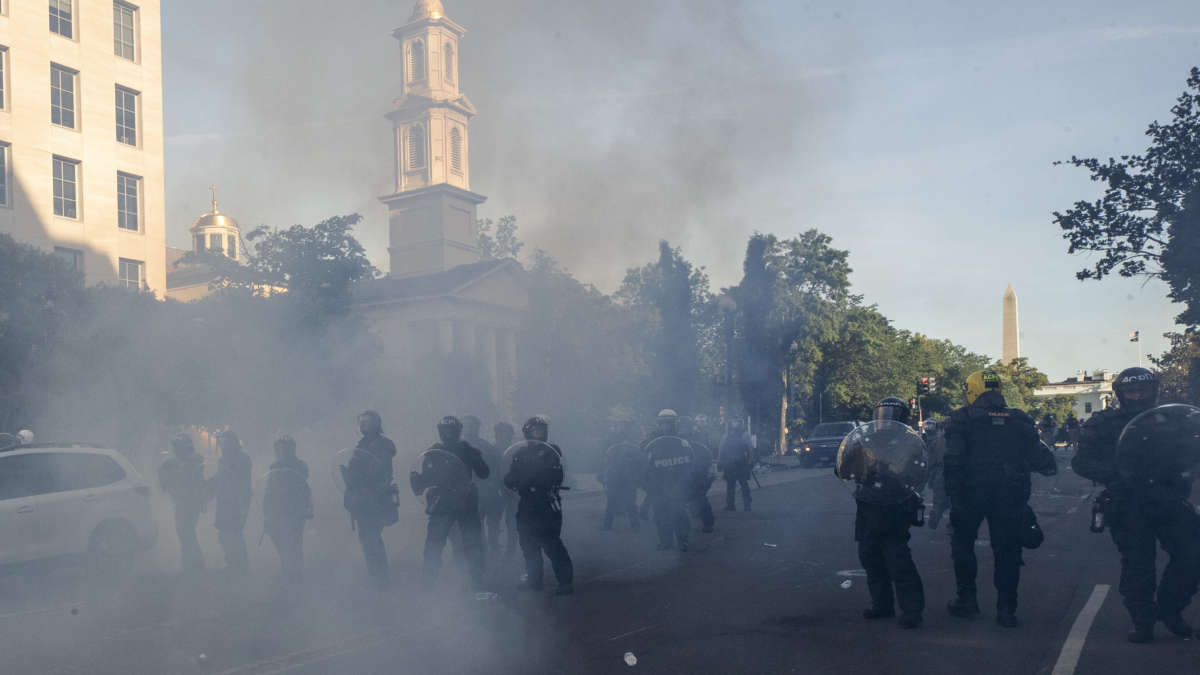 On Monday, police move demonstrators away from Lafayette Park, across from the White House.
Image credit: Alex Brandon

The American Civil Liberties Union of the District of Columbia filed a lawsuit Thursday against the Trump administration and federal law enforcement agencies, saying they violated the constitutional rights of demonstrators who were violently evacuated out of a park Monday to clear the path for a photo op by President Trump.

Court documents accuse officers of conducting a coordinated and “unprovoked charge into a crowd of demonstrators” who had gathered across from the White House in Lafayette Park to protest the killing of George Floyd and Breonna Taylor at the hands of police, as well as broader systemic injustices perpetrated by law enforcement against black people in the United States.

“What happened to our members Monday evening, here in the nation’s capital, was an affront to all our rights,” said April Goggans, Core Organizer of Black Lives Matter D.C., the lead plaintiff in the case.

As Trump held a press conference in the Rose Garden on Monday afternoon, he threatened to deploy the military to cities he said were besieged by violent protesters, saying the armed forces would “quickly solve the problem for them.”

At the same time, U.S. Secret Service, U.S. Park Police, D.C. National Guard, and U.S. Military Police who had been stationed across the street, deployed chemical irritants and shot rubber bullets to disperse what had been a peaceful protest. The confrontation took place well before the Washington, D.C., curfew of 7 p.m. ET.

At the conclusion of Trump’s news conference, he walked from the White House to St. John’s Church on the opposite side of the park, where he posed briefly for photographers, holding a Bible. He was accompanied by Attorney General William Barr among others.

The basement of the historic church was damaged in a fire Sunday night.

The lawsuit was filed in U.S. District Court for the District of Columbia on behalf of Black Lives Matter D.C., and individual protesters who were in Lafayette Park on Monday evening. It seeks an order barring officials, including Barr and Secretary of Defense Mark Esper from repeating the unlawful activities, and damages for the injuries plaintiffs sustained.

“Across the country, law enforcement armed with military weaponry are responding with violence to people who are protesting police brutality,” said Ben Wizner, director of the ACLU’s Speech, Privacy, and Technology Project.

“The First Amendment right to protest is under attack, and we will not let this go unanswered. This is the first of many lawsuits the ACLU intends to file across the country in response to police brutality against protesters,” Wizner added.

The ACLU is filing similar lawsuits in response to police attacks against journalists covering demonstrations across the country in recent days.