A Year In, Here’s What We Know About Vitamin D For Preventing COVID 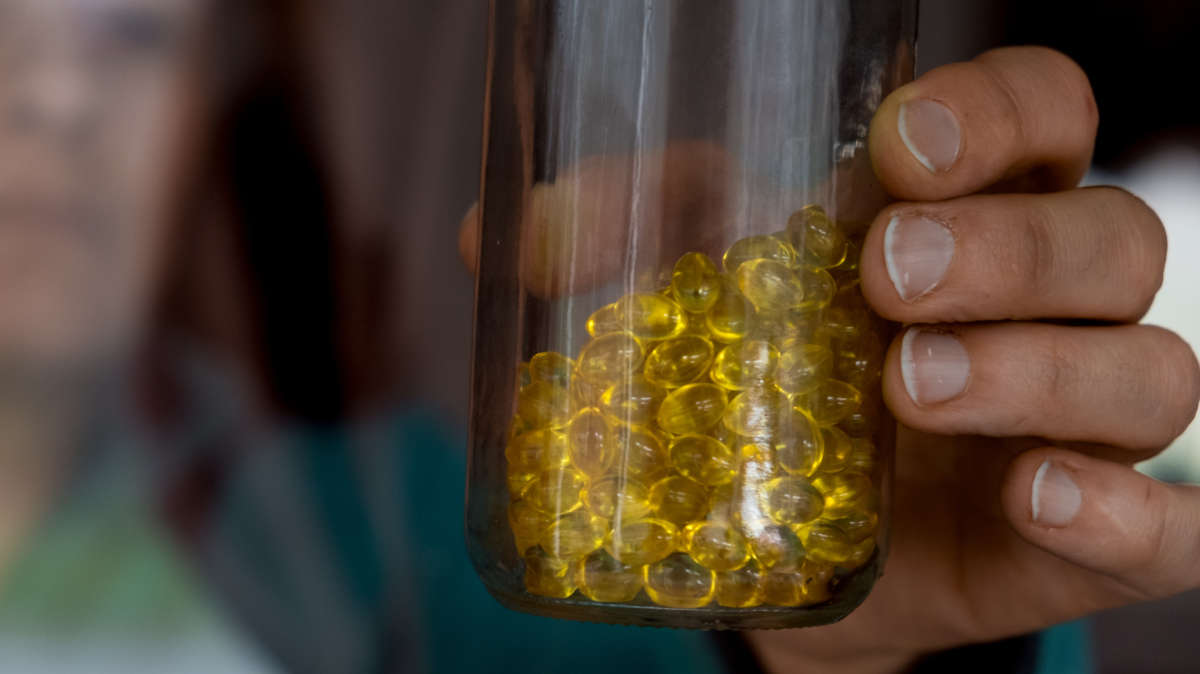 Some researchers are optimistic that vitamin D supplements may prove helpful in preventing COVID-19. Others are skeptical.

When the pandemic hit, many Americans turned to vitamins and supplements in hopes of boosting their immune systems.

Scientists also raced to study them. Vitamin D, perhaps more than any other, captured the attention of researchers.

Even the nation’s top infectious disease doctor Anthony Fauci embraced the idea of using the vitamin to help keep COVID-19 at bay, saying last fall that he takes a supplement to avoid being deficient and “would not mind recommending” it to others.

So should you take vitamin D to prevent or even treat COVID?

More than a year into the pandemic, many of the studies that can offer high quality evidence are still in the works, but there’s now enough out there to offer clues — as well as fodder for spirited debate — about the question.

But first — why vitamin D?

It’s unrealistic to think any one supplement can be a “cure-all,” but there are some compelling reasons to study vitamin D in the context of COVID-19.

In recent years, researchers have increasingly studied the effect of vitamin D supplementation on respiratory infections, with some clinical trials finding no meaningful effect and others suggesting it can be protective.

Vitamin D may help boost the innate immune system in a number of ways, explained Dr. Adit Ginde, a professor of emergency medicine at the University of Colorado School of Medicine and one of the study’s authors. One mechanism, he says, is by increasing antimicrobial peptides, which function as natural antibiotic and antiviral guards against pathogens.

Though some researchers are not yet convinced of the evidence for vitamin D and respiratory illness, others, like Ginde, are. “Based on those mechanisms, prevention [of COVID-19] would be the first scenario that you would expect to work,” says Ginde. “It’s also very clear deficiency causes dysfunction in the immune system.”

The link with COVID-19

It’s estimated as much as 40% of the U.S. population doesn’t get enough vitamin D and as many as 1 billion people worldwide have deficient levels.

Early in the pandemic, researchers noticed the overlap between populations that were at high risk of severe illness from COVID-19 and those likely to have vitamin D deficiency, in particular people who are overweight, elderly and those with darker skin.

It sparked a rush of commentary and academic articles on whether boosting vitamin D levels could help shield certain vulnerable people from coronavirus infection.

There are now quite a few observational studies and large reviews of the available evidence that show low vitamin D levels are associated with higher risks of contracting COVID-19 or with becoming seriously ill.

“What is clear from a number of studies is that there’s a strong relationship in terms of your levels prior to infection,” says Dr. Shad Marvasti, a professor of family and preventive medicine at the University of Arizona College of Medicine in Phoenix.

Low levels of vitamin D are associated with an increase in cytokines — “cell to cell chemical messengers that are responsible for inflammation” — and lower levels of protective immune cells, says Marvasti.

A study of 489 patients published in JAMA Network Open in September, found “the relative risk of testing positive for COVID-19 was 1.77 times greater” for patients who were likely vitamin D deficient compared to those with sufficient levels.

“That was really very striking,” says Dr. David Meltzer at the University of Chicago, who was the lead author of that study. “I started taking it and telling all my family and friends.”

In another recent study, Meltzer has also found that found Black individuals with high levels of vitamin D were less likely to test positive than those who had levels traditionally considered sufficient.

Another small study of patients hospitalized for COVID-19 in Spain found over 80% had vitamin D deficiency, compared to 47% of the general population; however, it did not find any relationship between vitamin D levels and the severity of disease.

“If I had money on it, I would bet that it’s more likely that vitamin D is helpful than not in COVID, but I don’t know for sure,” says Meltzer.

While these studies raised hopes among some researchers, others are skeptical, noting that most of these are observational studies, not the gold-standard randomized, controlled trials.

Much of the available evidence only shows association — not causation — and even those results are mixed, says Walter Willett, a professor of nutrition and epidemiology at the Harvard T. H. Chan School of Public Health.

“It would be one thing if we had very consistent evidence, but it’s showing either some benefit or no benefit at all,” says Willett. “At this point in time, we can’t really draw any firm conclusions.”

Indeed, some observational studies have found no significant associations when it comes to key questions around COVID-19 and vitamin D levels.

Researchers in Greece recently concluded that vitamin D deficiency was “not significantly associated with infections, recoveries or mortality rate of COVID-19 among European countries.” And, in December, an agency for the U.K.’s National Health Services reviewed the evidence and advised the public not to take vitamin D solely to prevent or treat COVID-19.

“We haven’t ruled out vitamin D completely, but I’m skeptical, having worked in this field for 15 years,” says Dr. Erin Michos at Johns Hopkins School of Medicine, who has studied the effect of vitamin D on heart attacks, strokes and other cardiovascular diseases.

Researchers have spent years tracing the association between low vitamin D and other diseases — obesity, diabetes, cardiovascular disease, depression, multiple sclerosis and cancer — but have either ended up with inconsistent results, or found no clear benefit from supplementation.

“So vitamin D deficiency is associated with things like older age, obesity and being a minority ethnicity,” says Michos.”Yet those are the same risk factors that are associated with severe COVID.”

This overlap makes studying the impact of vitamin D on COVID-19 tricky because it’s very difficult to tease apart whether low levels are actually causing people to be more susceptible.

“It may just be a marker of poor health and not actually something that can be intervened on to prevent COVID,” says Michos.

What about treating COVID-19?

Research on using vitamin D as a therapeutic intervention once people are infected with the coronavirus has produced slightly more high quality data, although the studies offer an inconsistent picture.

The most substantive evidence comes from a randomized placebo-controlled trial in Brazil. There, doctors gave hospitalized COVID-19 patients one large dose of vitamin D and concluded it “did not significantly” reduce patients’ length of stay in the hospital compared to the placebo group.

There are some caveats: Patients did not receive vitamin D until later in the illness, and it was a single large dose, rather than more incremental, frequent dosing, which seems to “work better for protecting immune function,” says Meltzer.

While the 240-person study could have easily missed “clinically important benefits,” the results are not encouraging, says Ginde of the University of Colorado, who wrote an editorial about vitamin D and COVID-19 for JAMA.

So what should you do?

So far, there is simply not enough evidence to confidently recommend taking a certain dose of vitamin D to fight off COVID-19, but experts stress that it’s reasonable to pay attention to whether they are getting enough, especially during winter months when levels tend to sink.

“There are many good reasons to avoid low vitamin D levels… a supplement is really the most reliable way to get it,” says Harvard’s Walter Willett.

But, as with many vitamins, Willett stresses “more is not better.”

Because vitamin D is fat-soluble (unlike vitamin C which is water-soluble), there is a risk that overshooting with supplementation can lead to toxicity, with some research showing that taking more than 50,000 IU regularly can be harmful.

There are varying guidelines for how much vitamin D adults should get on a daily basis, ranging from about 400 IU (international units) to 1000 IU, according to the Endocrine Society.

Dr. Marvasti says most people could “probably get away with about 1000 IU per day,” although it’s best to first check your baseline levels and speak to a doctor.

“Given the role that vitamin D is known to play in immunity and other medical conditions, to me, what’s the harm?”

Some clinicians are more wary.

“I’m not advising patients to take it to prevent COVID-19,” says Michos at Johns Hopkins.

Putting aside the debate over vitamin D, Michos points out there are plenty of time-tested ways to boost the immune system — eat vitamin-rich food like fruits and vegetables, exercise regularly, only drink alcohol in moderation and importantly, get enough sleep.

“I don’t think that patients need to necessarily waste their money on supplements,” she says.

But Meltzer at the University of Chicago, who is more hopeful about the potential benefits of taking vitamin D, points out there are still big gaps in the understanding of what is a “normal” level, “because those have been defined largely on bone health.”

“We don’t know really what the ideal levels are for immune function,” he says. “Depending on your skin tone and racial background or genetic background, there are very, very different needs, so this is an area that desperately needs more data.”