A Woman Claims R. Kelly Forced Her To Get An Abortion Against Her Will 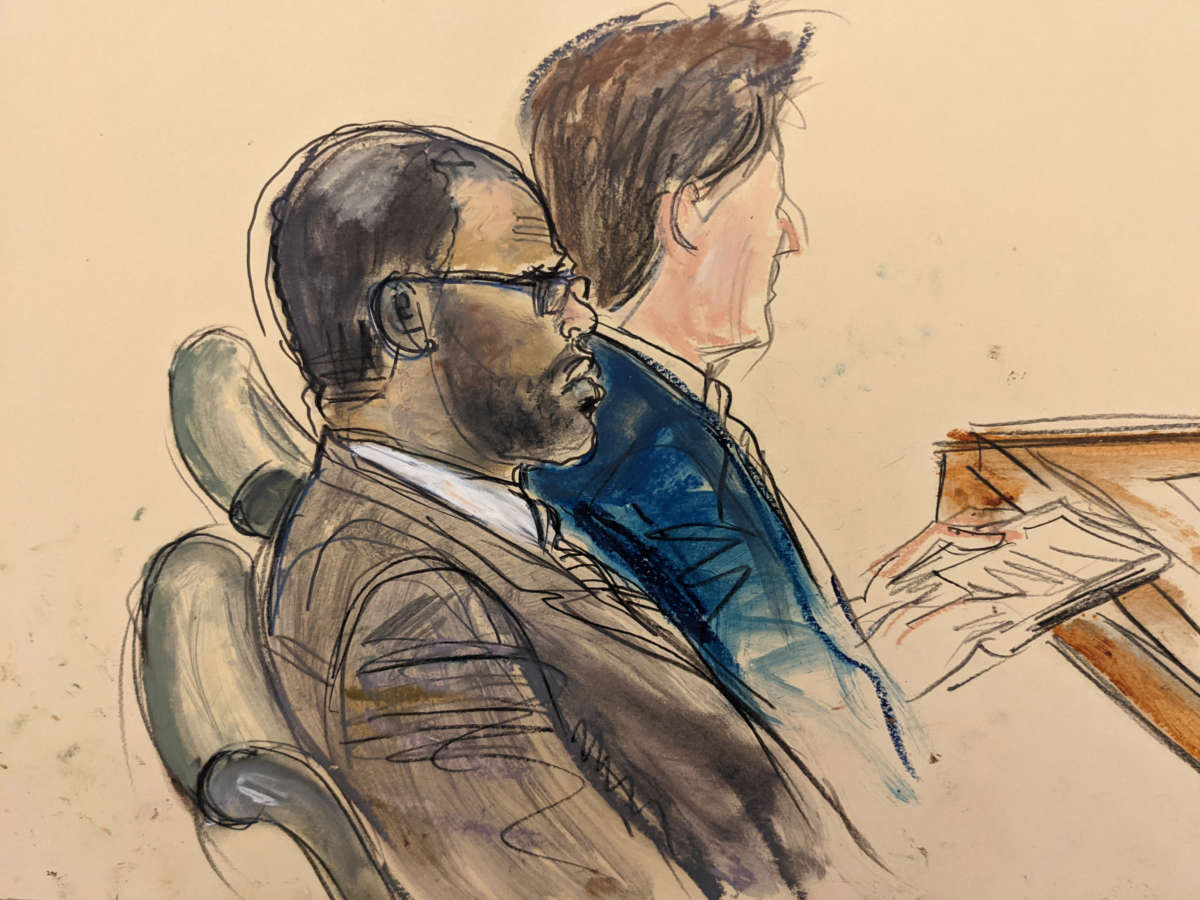 In courtroom artist's sketch made from a video screen monitor, defendant R. Kelly, left, listens during the opening day of his New York federal trial in Brooklyn on Aug. 18.
Image credit: Elizabeth Williams

A woman took the stand at a federal courthouse in Brooklyn during the trial of R. Kelly on Monday. In her testimony, she said that Kelly had forced her into having an abortion in 2017, and that he had sexually and physically abused her over the course of their five-year relationship.

The woman, “Jane,” is the second accuser to testify against Kelly in the New York federal trial, where charges include racketeering, kidnapping, forced labor and sexual trafficking. Kelly has pleaded not guilty to all charges against him.

In her testimony, “Jane” said she met Kelly when she was 17 years old, in 2015. She was a junior in high school at the time, and was interested in pursuing an artistic career as an R&B singer. She was taking a heavy load of music classes and extracurriculars at school, hoped to score a music scholarship to college, and was taking on professional gigs of her own.

She went with her parents to a music festival in Orlando, Fla., at which Kelly was performing. A member of his entourage passed her Kelly’s phone number, “Jane” said, and both she and her parents had hoped that the connection would help her develop her career.

“Jane” alleged that when she got the chance to audition for Kelly, he immediately pressured her into sexual activity. (She said that she originally told Kelly she was 18 years old.) “I was against it,” she said. “I told him I did not come to please him. He continued to persist.” Eventually she gave in, in exchange for the chance to sing for him, and he told her that he would “take care of me for life,” she said.

During the audition, she testified, her parents called in a wellness check after she turned her phone off at Kelly’s request. When the police arrived, she said, the police saw her legal ID that indicated she was 17, but still left her with Kelly. She soon became one of the star’s girlfriends, leaving home to live with him.

“I want to groom you”

“Jane” testified that she told Kelly her real age as her senior year approached, saying that she had to go home to finish high school. He slapped her in the face with an open hand, she said, and walked away. Kelly’s later solution was that she would live with him in Chicago and do homeschooling under the putative care of the mother of one of his other girlfriends, who is being called “Juice” in court. “Jane” lived with Kelly in Chicago and in Atlanta, and accompanied him on tours.

During her testimony, “Jane” said that soon after she became involved with Kelly, she had to follow his rules, such as not speaking to men, including ones in Kelly’s employ; only being allowed to wear formless and baggy clothes; and not allowed to leave rooms without his permission, even to the point of being isolated for days. If she failed to follow his protocols, she said, she was spanked and suffered other humiliations.

In a text message submitted as evidence, Kelly allegedly wrote to “Jane”: “I want to groom you and be bonded with you one hundred percent.”

The woman, who is now 23 years old, has requested to remain anonymous as a sex crimes victim. (In court documents, she is listed as Jane Doe #5.)

Much of the testimony from “Jane” echoed that of another accuser, Jerhonda Johnson Pace, who last week testified about having sexual relations with Kelly while she was underage during a six-month relationship. Pace had testified that Kelly had given her genital herpes without telling her that he had the disease or taking any precautions to avoid transmitting it, and that the singer had physically abused her. On Monday, “Jane” said that Kelly also had given her genital herpes. It was so painful, she said, that “it got to the point where I couldn’t even physically walk.”

Last week, Kelly’s personal physician of some 25 years, Dr. Kris McGrath, testified that he had diagnosed and begun treating Kelly for genital herpes sometime between 2000 and 2007. McGrath called in herpes medication prescriptions so often to Kelly’s preferred pharmacy that, the doctor said, “I had memorized the phone number to that Walgreens.”

McGrath, who is based in Chicago and is on the faculty of Northwestern University’s medical school, testified that he never received direct payment for his services. Instead, Kelly flew the doctor and his wife around the country to enjoy his performances, and frequently socialized with the couple.

A former low-level assistant named Anthony Navarro told the court last week about being a runner for Kelly, driving girls, cleaning studios and delivering packages for him. It was Navarro’s first job in the music industry; since then, he said, he has worked as an audio engineer with musicians like Taylor Swift, Jay-Z and Kanye West.

He also referred to what he called “Rob’s Rules” for employees and for Kelly’s girlfriends. It was only in retrospect, Navarro said, that he realized how odd working for Kelly was by comparison.

“The things you had to do was a bit uncomfortable,” said Navarro. “It was almost like the Twilight Zone. You went into the gate and it was like a different world, just a strange place.”

Demetrius Smith, formerly a tour manager for Kelly, also finished his testimony on Monday. Smith reluctantly testified that he helped organize the marriage between Kelly and the late pop star Aaliyah. Smith said he bribed an employee at an Illinois state welfare office with $500 to obtain a fake ID for Aaliyah, so that she and Kelly could apply for a marriage license. (Aaliyah, whose full name was Aaliyah Dana Haughton, died in a plane crash in 2001; she is identified in the court documents as Jane Doe #1.)

At the time of the marriage on Aug. 31, 1994, Aaliyah was 15 years old, and Kelly 27. Smith said that the reason for the marriage is because Kelly believed that Aaliyah was pregnant, and that Kelly and one of his employees, former business manager Derrel McDavid, believed the marriage would prevent Kelly from potentially being prosecuted for having had sex with a minor.

Years later, “Jane” testified on Monday, she and Kelly’s other girlfriends asked him about his marriage to Aaliyah. “Jane” said that Kelly told them the reason for the marriage was because Aaliyah had been pregnant, and that only Aaliyah’s parents or a spouse could approve an abortion.

The federal trial in Brooklyn is expected to last about a month. Kelly faces separate federal charges involving child pornography and obstruction of justice in Illinois.