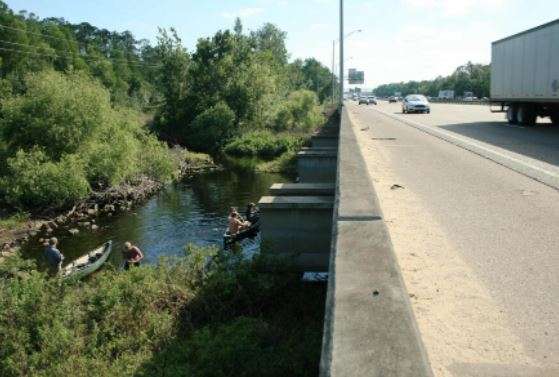 Since the construction of I-4 over 50 years ago, the highway has become a barrier to wildlife movement.

The first underpass for wildlife — instead of cars — is being built on Interstate 4 west of Haines City in Polk County. It’s the latest in a series of underpasses that will allow animals to once again follow their natural migration pathways.

The culvert is being constructed near the interchange with State Road 557 in Polk County. It will re-connect a green corridor between two sections of a wildlife management area that has been bisected by I-4 since the 1970s.

Brent Setchell is a drainage design engineer on the project with the state Department of Transportation.

“With I-4, it’s a significant barrier to wildlife movement,” he said. “There’s over 100,000 vehicles per day that travel on that roadway. There’s no way for wildlife to safely cross the road. And if they do attempt it, they’re likely to get hit by a vehicle, which is dangerous to motorists.”

FDOT engineer Brent Setchell is second from left, at the site of the underpass construction
(via: Florida Department Of Transportation)

The section was chosen as part of the Florida Wildlife Corridor, which allows wildlife to migrate freely between preserved areas. Since the construction of I-4 over 50 years ago, the highway has become a barrier to wildlife movement. It blocked genetic exchanges between animals and restricted their home ranges.

Last week, Brenda Malloy, chair of the White House Council on Environmental Quality, toured the underpass site along with members of the Florida Wildlife Corridor Foundation.

Once the underpass is completed by the end of next year, 1.5 miles of 10-foot-high fencing will steer wildlife toward the underpass and away from the highway.

“We’re expecting to get deer, certainly bobcats, coyotes, possums, raccoons, armadillos,” Setchell said, “and hopefully occasionally a Florida black bear and a panther may even eventually cross through there.”

Two wildlife underpasses were built farther east during reconstruction of I-4 several years ago between Orlando and Daytona Beach. Setchell says they have seen photos of black bears using the crossing.

Alligator Alley has 38 dedicated wildlife crossings through the middle of the Everglades when Interstate 75 was expanded through South Florida in the 1980’s. Setchell said more wildlife crossings are planned on major highways throughout the state.

Map of the new underpass
(via: Florida Wildlife Corridor)