A Weekend With 7 Vendors Of San Juan, Illustrated 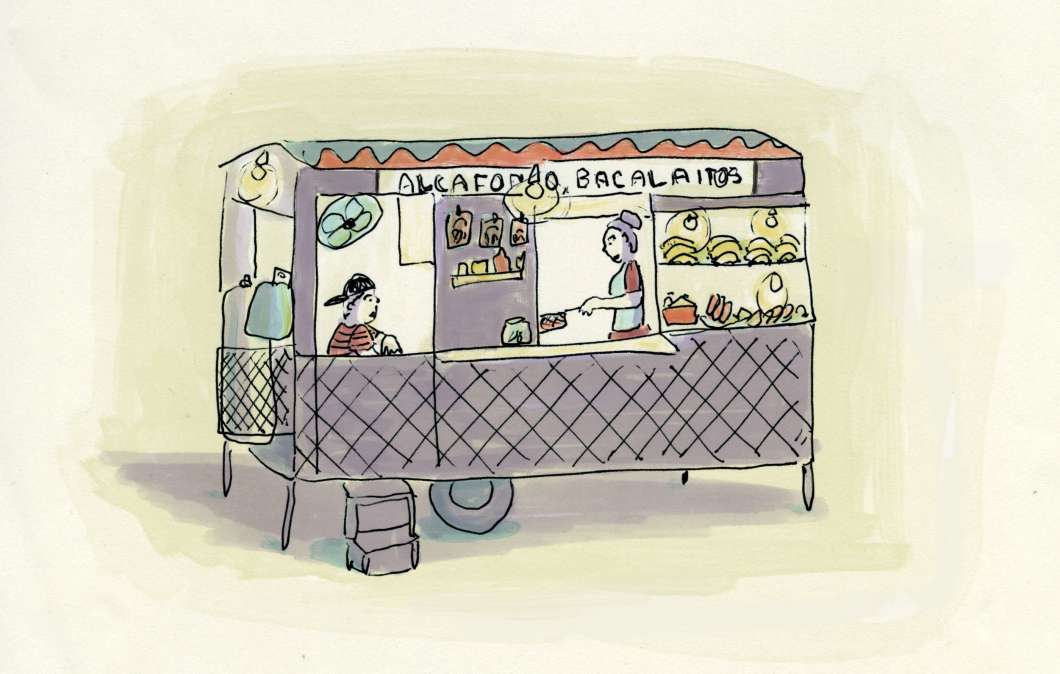 Before Hurricane Maria, Brian Gonzalez could sling 500 empanadillas, fried Puerto Rican empanadas, each day to tourists from cruise ships stopping at Old San Juan. On a recent day, he sold less than 50.

It’s the story of many street vendors that depend on sightseers and visitors to San Juan’s biggest attractions.

Before Hurricane Maria five weeks ago, there were dancers in the square, music in the street and hardly a parking space in sight. Power outages have since turned tourist hotspots like oceanfront Condado and Old San Juan into a dark and empty ghost town.

Still, a skeleton crew of vendors remain. They keep showing up, driven by force of habit, tradition and a sliver of hope that things will soon return to normal.

Here are the illustrated stories of some of those vendors. These drawings were made on the spot, last weekend – at what typically are busy times.

He’s been doing this for more than two decades. He loves his job. “The drink and the candy,” he says, “they just go to together.”

Ice has been hard to come by since Maria. But he’s still managed to procure a giant block, enough to make 100 snow cones every day.

Suarez wakes up early in the morning to wait in line for it. He’s not selling as many piraguas as he used to, but he still has customers looking for relief in the 80 degree heat.

Brian Gonzalez, a vendor of fried food, parks in front of the cruise ships in front of Old San Juan, and waits. Visitors from all over the world would pour off the ships and into the streets. He says they loved stopping at his cart to sample traditional Puerto Rican food. His empanadillas and plantain, yucca and codfish fritters sold like hotcakes.

Today, Old San Juan is without streetlights. He sells a tiny fraction of the usual. “Business has been horrible,” he says. “There’s nobody here. We have been hit really bad.”

Gonzalez, 23, has been working at the stall for over a year. He’s the cashier, his wife is the fry cook. But the cart, owned by his father, has been here for 25 years. People will be back, he says with air of confidence. “I don’t blame the tourists who don’t come,” he says. “There’s nothing to see here right now.”

Nelida Marrero, 48, sits in front of her bar Cafetin Marrero in Old San Juan. The street is pitch black except for the soft glow of candles and solar lamps inside. The bar, popular with both locals and celebrities, has been open for 28 years.

Quintana says she could make as much as $1,500 a night making bracelets made of semi-precious stones and sea glass she collects from the local beaches. Doing it three or four days a week was a great way to earn a living, she says. And she’s been at it for 14 years.

She’ll consider herself lucky if she makes $200 tonight. She’s selling bracelets to Federal Emergency Management Administration workers and first responders who are now occupying the hotels in Condado.

But it can’t go on like this. Quintana’s got a son in private school and a daughter in college. Living without electricity and running water has made life much, much harder.

“I am struggling, getting in line for gas, for ice, for food, washing clothes by hand, then coming to sell jewelry. There aren’t enough hours in the day,” she says. “It’s like we’re living in the 1940s.”

John McCluskey is a self-described “gringorican” – white guy living in Puerto Rico. For years, he has been weaving decorative baskets out of the palm fronds that he finds lying around Condado. He hasn’t sold a single basket all day.

His bigger concern is where he will find more of the soft, pliable and green palm fronds he needs to make the baskets. The hurricane is going to put him out of work for about three months. “I use the second, third and fourth branches of the palm tree to make the baskets,” he says. “Those just got blown over. It will be another few months until those branches grow back.”

But locals, who call him Palm Tree John, have reached out, he says. They stop by to give food, check in on him and even supply him with things to sell. The fashion boutique in front of his shop gave him earrings, bracelets and necklaces in hues of hot pink and yellow, with giant plastic rhinestones. They told him he could keep the profits.

“People here have good hearts,” he says. “But I don’t know what I’m going to do.”

At a gift shop called Mi Pequeno San Juan, an artisan named Nico Thomassin hand-paints replicas of historical buildings and doors. He usually uses a hairdryer to dry the paint, but with much of the city without power, he’s fanning it with a notebook.

Thomassin wasn’t always an artist. The store was inherited through his wife, whose family owned it for two generations. When they got married, she told him: “Either you start painting, or I divorce you.”