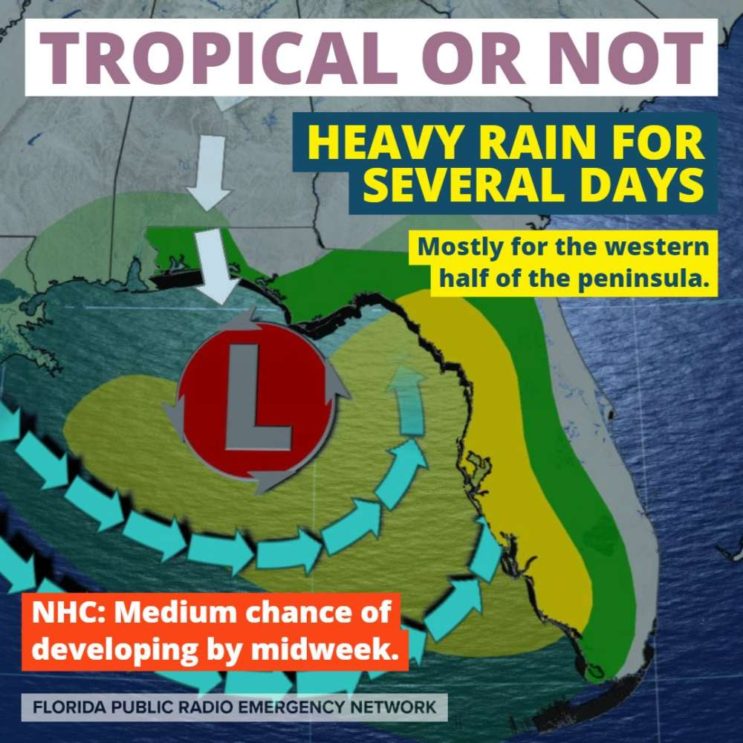 Heavy rain and potential flooding is in the forecast this week across parts of Florida, and a tropical storm might even form nearby.

Regardless of its tropical status, several inches of rain are likely to fall near Florida’s Gulf Coast this week. Nearby seas will also grow unsettled, with minor coastal flooding and multiple beach hazards expected.

If a tropical storm does form, it would have an uncommon origin. The area of lower pressure by which it could evolve from was over land, producing thunderstorms in the Tennessee Valley Sunday. However, upper-level winds are forecast to steer it into the northeast Gulf of Mexico by Tuesday where conditions are marginally favorable for tropical cyclone formation.

Forecasters at the National Hurricane Center have been watching this system closely since Friday, and in their 8 pm Sunday outlook, placed odds of a tropical depression or storm forming at 50 percent.

The potential tropical development is projected to meander over the northeastern Gulf of Mexico through midweek, before eventually moving in one of two directions. Preliminary long range forecast data is split, with one outcome being a westward moving tropical cyclone approaching the north-central Gulf Coast by Friday. The more likely scenario, at least at this point, is that the system – whatever its classification – is pulled northeast across northern Florida and into the Mid-Atlantic states by another approaching weather system.

The eventual track and strength of the disturbance will be a significant factor in how much rain falls over the next five days. Regardless of those details, several inches of rain are still possible in many areas. Forecasters at the Weather Prediction Center have outlined much of west-central Florida in a region likely to receive more than four inches of rain through Friday. Locally higher amounts, possibly up to 7 inches, are possible immediately along the coast from Cedar Key to Fort Myers. Further inland, across both the peninsula and panhandle, five-day rainfall accumulations of 1 to 4 inches are expected in most areas.

It was already a rainy weekend for many Floridians, and several more rounds of the soggy stuff are expected in some areas Monday. Winds around the approaching low pressure system will begin to funnel even more tropical moisture into the state. The first round will be heaviest near the Nature Coast, Tampa metro and Sun Coast regions of the state, where the onshore winds will be primarily focused.

More typical scattered afternoon showers and thunderstorms will be possible for areas further inland and to the east, in locations such as Tallahassee, Gainesville, Ocala, Orlando and Miami. A few strong thunderstorms may also develop by early evening in the Florida Panhandle. This activity will be primarily driven by daytime heating and diminish after sunset.

A broad area of low pressure is forecast to move into the northeast Gulf of Mexico Tuesday. The counter-clockwise motion of the wind around this feature will continue to send tropical moisture across the peninsula, but many areas in the Florida Panhandle might dry out some thanks to a more offshore wind.

How far inland the heaviest rain moves across central and south Florida, however, it still very much in question. Forecast data suggests that most of it will stay closer to the Gulf Coast, where several hours of heavy rain are again possible from the Nature Coast to Southwest Florida. Showers and thunderstorms will be more widely scattered across the rest of the state, but with also the potential to produce locally heavy rain.

After Tuesday: Uncertainty Too High

Specifics in any other hazards from the potential tropical system, such as coastal flooding or rough seas, are not real clear just yet. Even if confidence was high that a tropical storm will form, these details won’t be known until we have a better understanding on where it moves and how strong it becomes. Nonetheless, residents who live near the coast and in low-lying areas are urged to stay informed of the latest forecasts with this weather system.

If the aforementioned disturbance is classified as a tropical storm, it would acquire the name Barry. The first tropical cyclone of the 2019 season formed in May near Bermuda. A tropical storm forms, on average, two out of every three years in July across the Atlantic basin. Historical records from NOAA also reveal that a hurricane occurs in July only once every three years.