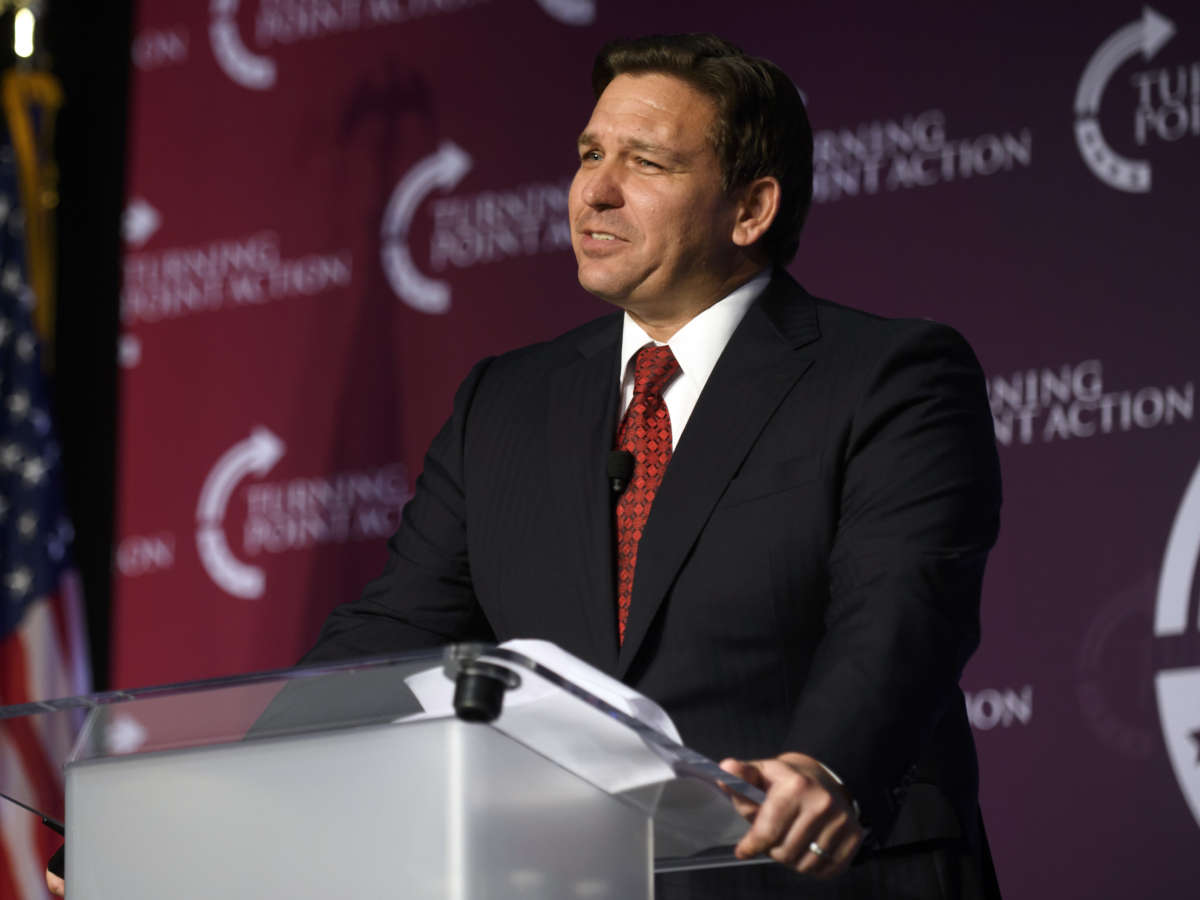 Florida Gov. Ron DeSantis' flight that took 50 migrants to Martha's Vineyard, Mass., is being investigated by the Bexar County Sheriff's Office in Texas. The migrants were flown from Texas to Florida and then on to Martha's Vineyard. Here, DeSantis speaks at a rally on Aug. 19 in Pittsburgh.
Image credit: Jeff Swensen

Authorities in Texas have opened a criminal investigation into Florida Gov. Ron DeSantis’ flight last week that took roughly 50 Venezuelan migrants to Martha’s Vineyard, Massachusetts. Javier Salazar, the sheriff of Bexar County, where San Antonio is located, said in a news release Monday that his office is investigating whether the migrants were victims of crimes:

The Bexar County Sheriff’s Office has opened an investigation into the migrants that were lured from the Migrant Resource Center, located in Bexar County, TX, and flown to Florida, where they were ultimately left to fend for themselves in Martha’s Vineyard, MA.

Additionally, we are working with private attorneys who are representing the victims, as well as advocacy organizations regarding this incident. We are also preparing to work with any federal agencies that have concurrent jurisdiction, should the need arise.

“What we understand is a Venezuelan migrant was paid a bird-dog fee to recruit 50 migrants who were then were lured — and I will use the word “lured” under false pretenses — to staying in a hotel for a few days, then taken to an airplane where they were flown to Florida and then Martha’s Vineyard under false pretenses of being offered jobs,” says Salazar. “For what we can gather, a little more than a photo op, a video op, and then they were left there.”

The sheriff continued to explain his anger over the incident and the false promises that brought the migrants onto the plane.

“What infuriates me the most is what we have is 48 people here legally — they have every right to be here and they were preyed upon. Lured with promises of a better life and with the knowledge they would cling anything that was offered for a better life and were exploited and hoodwinked to make the trip to Florida for what I believe was political posturing.”

“When you’re playing with human lives, people that have every right to be here, that does tend to bother me quite a bit. We are absolutely opening an investigation into this.”

Salazar added that the White House has not been in contact with his office, but he does welcome open communication.

‘This case would absolutely have to go federal, and I would welcome a call from the White House to discuss.”

Salazar wanted to be as clear as possible to remind viewers that the migrants are in the U.S. legally and that they have every right to walk around free and not be preyed upon or lured into a situation that they did not choose to be in.

“If someone is here and they are illegally here and are undocumented, they have rights to not be victims. They have rights to not be lured to another state with fake promises. With that being said, these people were here legally. They were documented. They had the right to walk around the streets free and not be transported across the country for it to be a media event. That’s a tragedy. That is at worst some type of crime. We’re going to look at what extent of the law we can hold people accountable.”

Flying migrants to Massachusetts was political, critics say. But was it legal?