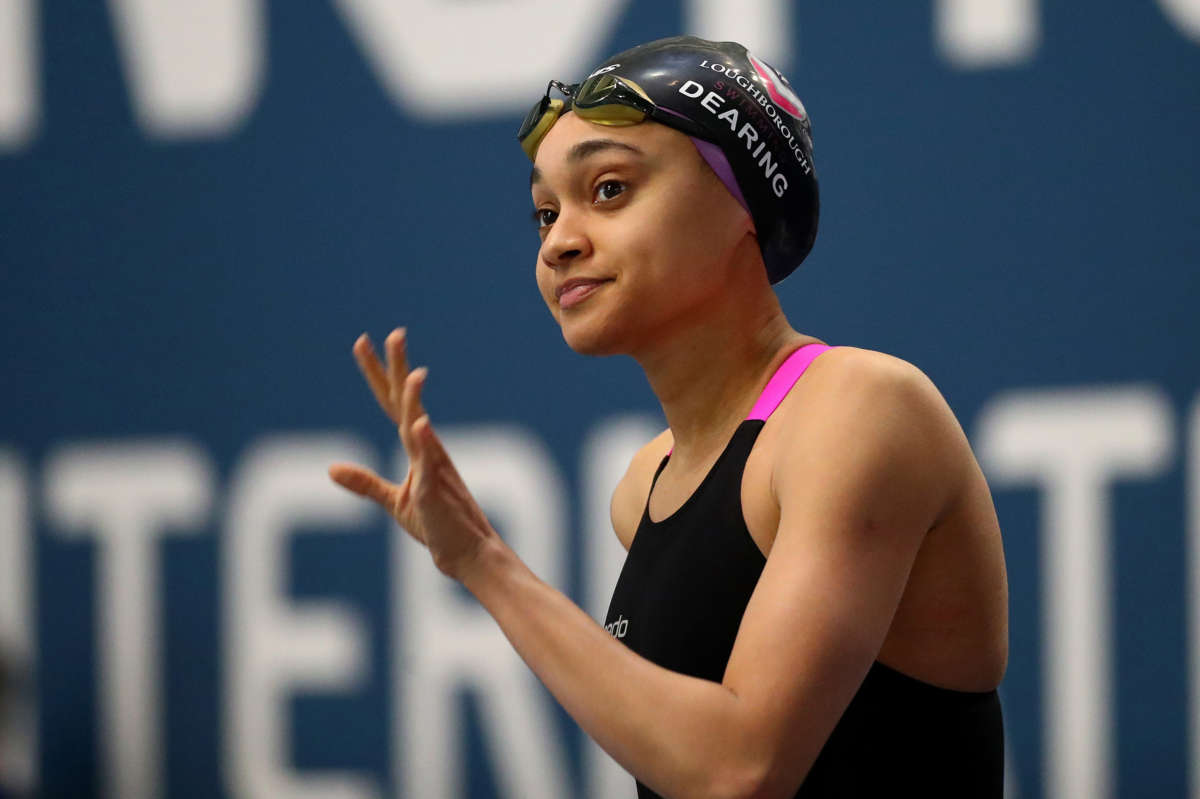 Alice Dearing, who is slated to become the first ever Black woman to represent Great Britain in swimming at the Olympics this year, is an ambassador for Soul Cap, a swim cap made for natural Black hair.
Image credit: Clive Rose

The International Swimming Federation says it will revisit its decision barring a swimming cap designed specifically for natural Black hair from being used in competition.

The makers of the Soul Cap, a product tailor-made so that swimmers with voluminous, Afro-textured hair can protect their hair while in the water, said on Instagram last week that the sport’s governing body had denied their application for certification. The decision effectively assured that the cap would not be in use when the Olympic games begin later this month.

The news drew considerable backlash, prompting the International Swimming Federation, also known as FINA, to release a statement on Friday acknowledging the public response and announcing that it was “reviewing” the situation.

“FINA is committed to ensuring that all aquatics athletes have access to appropriate swimwear for competition where this swimwear does not confer a competitive advantage,” the statement reads. “FINA is currently reviewing the situation with regards to ‘Soul Cap’ and similar products, understanding the importance of inclusivity and representation.”

The organization noted that the cap can still be worn in “recreational and teaching” settings, and said it will reach out to the makers of the cap about the possibility of using it inside FINA Development Centers. The centers serve as international training facilities for promising swimmers and coaches, according to the organization’s website. It’s not uncommon for elite swimmers to train for the Olympics at the development centers.

“FINA appreciates the efforts of ‘Soul Cap’ and other suppliers to ensure everyone has the chance to enjoy the water,” the organization said, adding, “FINA expects to make its consideration of ‘Soul Cap’ and similar products part of wider initiatives aimed at ensuring there are no barriers to participation in swimming, which is both a sport and a vital life skill.”

FINA did not immediately respond to a request for comment.

FINA said the cap did not meet its requirements

In its initial decision, FINA ruled that athletes competing at the international level have “never used, neither require to use, caps of such size and configuration,” according to the Associated Press. The report said that the group also determined that the cap does not “[follow] the natural form of the head,” a rule that is outlined in FINA’s requirements for approved swimwear.

The decision prompted substantial controversy on social media, with many remarking on the long-standing problems of inclusivity in the world of competitive swimming. Danielle Obe, chair of the Black Swimming Association, told Sky Sports she feared the decision would alienate young Black swimmers.

“This will affect younger swimmers, up and coming, who might want to consider taking up elite swimming,” she said. “It will affect their decision because, by and large, hair is a significant barrier to aquatics for many women especially, and many people of color from our communities. So [the Soul Cap] should be considered as a product that overcomes this barrier.”

In a statement in response to FINA’s initial decision, the makers of the Soul Cap said that their reasoning for making their caps in the first place was to create a product for an overlooked demographic — those with full, Afro-textured hair who struggled to get their hair to fit into the swimming caps available.

“We hoped to further our work for diversity in swimming by having our swim caps certified for competition, so swimmers at any level don’t have to choose between the sport they love and their hair,” founders Michael Chapman and Toks Ahmed Salawudeen said on Instagram. “For younger swimmers, feeling included and seeing yourself in a sport at a young age is crucial. FINA’s recent dismissal could discourage many younger athletes from pursuing the sport as they progress through local, county and national competitive swimming.”

Champion swimmer Alice Dearing is hoping for the best

Alice Dearing, who is slated to become the first ever Black woman to represent Great Britain in swimming at the Olympics this year, is an ambassador for the cap, according to the brand’s Instagram. But unless FINA reverses their decision, she will not have the option of wearing the Soul Cap during the games.

Amid the controversy, Dearing said during an interview with Sky Sports that she wants to continue to encourage young Black swimmers and does not want them to fear that competitive swimming isn’t a welcoming environment for black athletes.

“I don’t want little Black boys and little Black girls to look at elite swimming and think it’s not open to them because that is completely the wrong idea,” she said. “It is open to them. I’m really hopeful that, it being under review, that some agreement will come about.”

Dearing said that when she was a kid, her mother used to have to relax her hair and then braid it to make it easier to fit into a swimming cap. It was only as an adult that she’s been able to find ways to wear her natural hair as a swimmer, she said, adding that it’s been encouraging to see so many people be so passionate about making sure that competitive swimming is accessible to everyone.

She concluded, “I’m really hopeful that this story will have a happy ending and I’m pretty sure it will.”