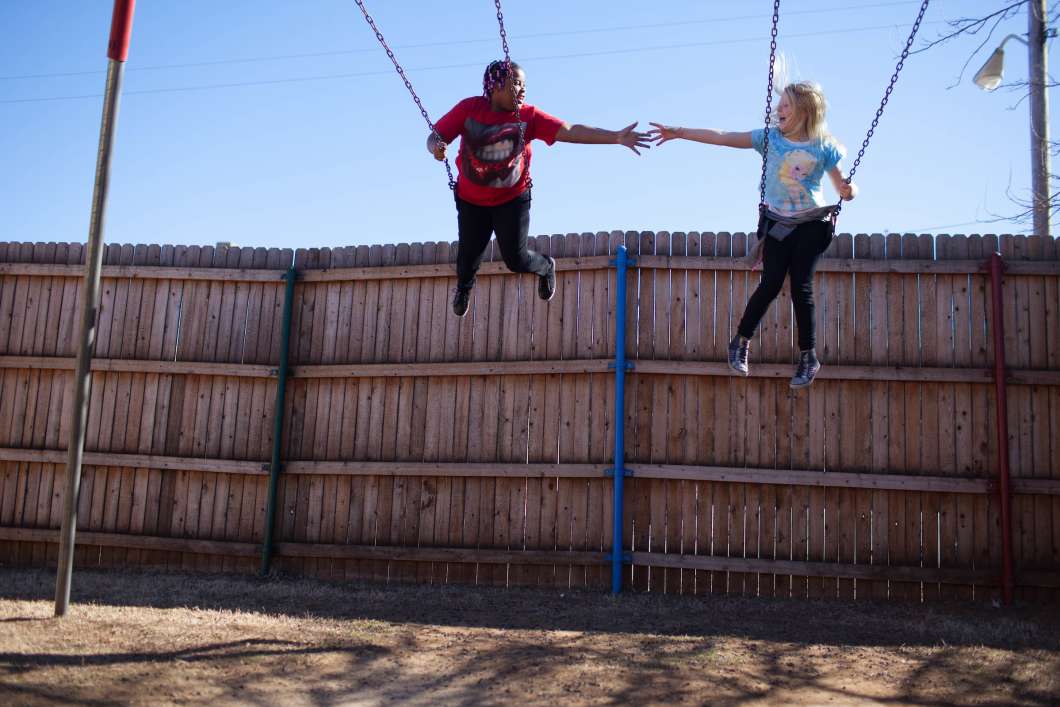 Many of the challenges the teachers and administration work on with homeless children are social skills techniques for managing stress, anxiety and feelings. Here, students in Shelly Fryer's class take time for play.

Photographer and journalist Katie Hayes Luke reported throughout the year on an innovative school for homeless children in Oklahoma City, Okla. We’re not using the first names of students and family members to protect their privacy.

On the last day of school, the 5th grade students at Positive Tomorrows perform last-minute rehearsals for the inaugural “Classy Awards.”

Teachers, parents and mentors file into the classroom through a doorway pasted with dangling gold stars, along a red paper carpet. While similar scenes play out in classrooms across the country, this particular group of fifth-graders has a more uncertain future than most.

Positive Tomorrows is a small, privately-funded school in the heart of Oklahoma City, designed to meet the needs of homeless children. The future of these students hinges on the one constant in their lives: the school, which addresses both education and basic needs.

The educational challenges associated with homelessness are broad and extend to every corner of a child’s life. Without consistent access to adequate food, shelter and safety, students are often too hungry, tired and stressed to keep up in the classroom.

“It is sort of like trying to change your tire on I-35 and I am trying to teach you how to read while that is happening,” says Amy Brewer, the school’s director of education. “Obviously that does not go very well.”

The National Center for Homeless Education reported that 1.3 million students experienced homelessness during the 2014-15 school year, with a 3.5 percent increase in each of the three previous years.

Unfortunately, a new study just released by the Institute for Children, Poverty & Homelessness points out that federal funding has remained flat over this time. And states vary widely in their commitment to identifying and serving homeless students.

In Oklahoma City, schools saw the number of students reported to be homeless rise from 3,600 in 2016 to more than 5,400 this past year.

“That is a huge jump,” says Kathy Brown, the homeless education coordinator for the Oklahoma City public schools. “I think that part of it is because we had students that rolled over from last year that were already homeless [and] hopefully, better identification within the schools.”

Of these 5,400 students, Positive Tomorrows is able to serve 74 at a time in its pre-K through fifth-grade program, totaling 123 students for this academic year.

Positive Tomorrows began in 1989 as a collaboration between the city’s public school district, the state department of education and some national nonprofits to target the specific educational needs of homeless students.

But with the passage of the federal No Child Left Behind Act in 2002, public school systems were no longer allowed to segregate students based on their homeless status. After losing public funding, Positive Tomorrows reopened as a private, tuition-free elementary school, with the majority of its funding coming from private donors, foundations and corporations.

While there is no official data on how many schools specifically target homeless students, there are at least three similar schools in the U.S.: Monarch School, a public K-12 in San Diego; TLC, a public K-6 in Stockton, Calif.,; and Children’s First Leadership Academy, a K-8 charter school in Phoenix with 100 percent of students at or below the poverty level, with the majority being homeless.

At Positive Tomorrows, support services focus on the needs of the whole family — finding job-training opportunities, running parent support groups and helping connect students to stable housing. In addition, teachers and administration work with the children on social skills techniques for managing stress, anxiety and feelings.

On this last day of school, Shelly Freyer walks her 3rd and 4th graders to Braum’s, a local restaurant, for an end-of-year ice cream treat. The excitement and laughter fill the small store and exemplify what Freyer considers one of the greatest misconceptions about homeless students.

“These kids are like other kids,” says Freyer. “They come to school and they are ready to learn and excited about learning.” They aren’t sad or constantly in trouble, she says.

While all of her students are defined as homeless, she explains that none of the students consider themselves homeless. “Wherever their mom is, wherever they are staying, that is home,” explains Freyer.