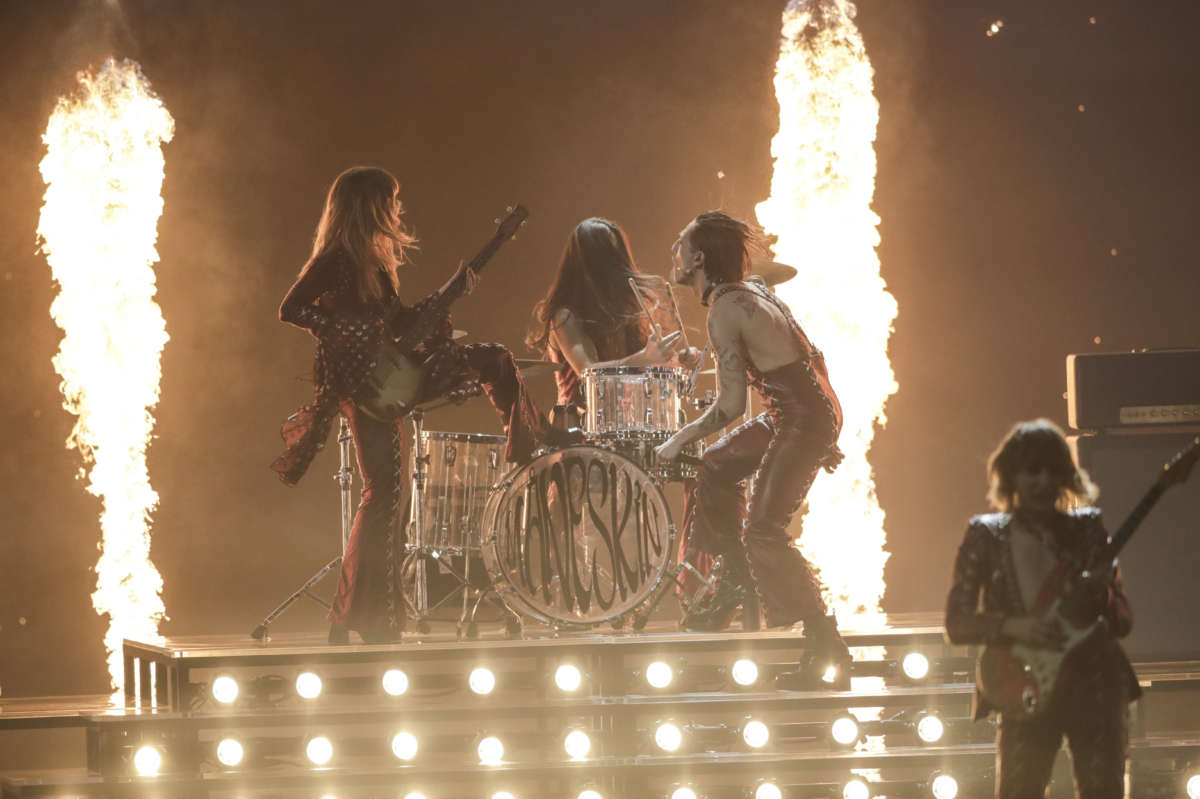 The music festival was cancelled last year amid the global pandemic but the event in Rotterdam’s Ahoy arena with its regime of testing and strict hygiene protocols was seen as a step toward a post-COVID-19 return to live entertainment.

Maneskin’s win was only Italy’s third victory in the immensely popular contest and the first since Toto Cutugno took the honor in 1990.

Later Sunday, Eurovision organizers said Maneskin’s lead singer has asked to take a drug test to refute speculation that he sniffed cocaine during the show.

It said the band “strongly refuted the allegations of drug use” that bubbled up on social media after David appeared to bend over a table during the contest.

Italy, the bookmakers’ favorite, trailed Switzerland, France and Malta after the national juries delivered their votes but were propelled to victory by votes from the viewing public.

A crowd of 3,500 fans, who all tested negative for the coronavirus, watched the finalists perform live.

Maneskin is Danish for moonlight, a tribute to the home country of bassist Victoria. The band won with a total of 529 points from second-placed France. Switzerland, which led after national juries had voted, finished third.

United Kingdom singer James Newman’s song, “Embers,” failed to ignite any love at all and did not score a single point, finishing last, just as the U.K. did at the previous Eurovision two years ago.

U.S. rapper Flo Rida didn’t manage to translate his star power into points for tiny San Marino’s entry that was sung by Senhit. They finished with just 50 points.

For lovers of kitsch, German singer Jendrik played a sparkling ukulele and danced with a woman dressed in a giant hand costume optimistically showing the victory sign. He finished close to last.

Pravi’s song. “Voilà,” was a restrained ballad, but there was still plenty of the over-the-top spectacle that has become Eurovision’s trademark.

Norwegian singer Andreas Haukeland, whose stage name TIX is a reference to growing up with Tourette syndrome, sang “Fallen Angel” in a pair of giant white wings while chained to four prancing devils.

At the other end of the spectrum — Finland’s hard-rocking Blind Channel played their song “Dark Side” amid bursts of pyrotechnics and Ukraine’s Go_A performed surrounded by skeletal white trees.

Ahead of the show, crowds gathered outside the arena in the Dutch city of Rotterdam. Drag queens mingled with families as a man in a gold suit waited to get into the venue.

The popular Icelandic band Dadi og Gagnamagnid, known for its kitsch dance moves and green leisurewear costumes, could not perform live because one member tested positive for the virus earlier in the week. Instead, viewers saw a recording of one of the band’s dress rehearsals.

“The point was to go and actually experience how it was to compete in Eurovision, and that’s just really not happening,” lead singer Dadi Freyr said from isolation in Rotterdam.

While the entertainment world has changed in the pandemic, the Eurovision final formula familiar to its worldwide legion of fans has not. The event was hosted as usual by the last winner, the Netherlands, except that it won in 2019.

Milo Mateo and Carlo Sossa, wearing matching sequin-covered hats and draped in Italian flags, came from Italy for the show and were hoping for a Maneskin victory since that would bring next year’s contest to Italy.

“If we win, it will be very, very nice, because the next year will be in Italy. That’s very good. Let’s hope. Fingers crossed,” Mateo said as he waited to get into the arena.