A Piece Of Chinese Space Junk Could Return To Earth This Weekend. Where It Lands Is Still Unknown. 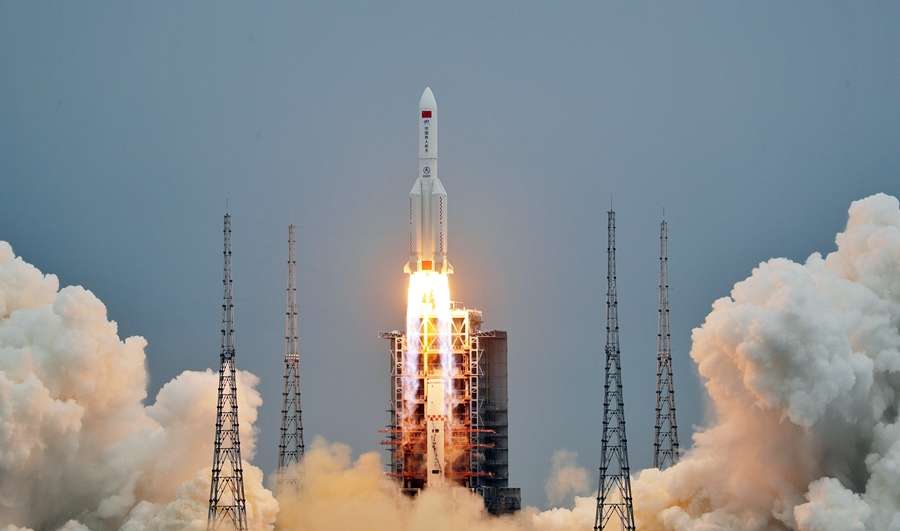 China's Long March 5B launches from Wenchang Space Launch Center in Hainan province April 29, 2021. A portion of the rocket is expected to survive reentry and crash Saturday. Photo: CNSA

A 100-foot long piece of space junk is making an uncontrolled descent into the atmosphere and trackers aren’t sure where it will land.

The nearly 24 ton rocket part comes from a recent Chinese launch of a Long March 5B rocket. It’s tumbling back down to Earth at an estimated 18,000 miles per hour. Because of its size, at least part of the rocket is expected to survive reentry into Earth’s atmosphere.

The rocket launched a portion of China’s space station Tiangong on April 29, carrying the heaviest portion of the orbiting outpost.

The U.S Space Command said it’s tracking the falling portion of that rocket, but its exact entry point cannot be pinpointed until within hours before its reentry, expected as early as Saturday.

Harvard-Smithsonian Center for Astrophysics astronomer Jonathan McDowell is tracking the object and said because of its size, not all of it will burn up in the atmosphere. Despite the uncertainty, there’s little worry.

“As an individual, if you’re worried for yourself, don’t be,” said McDowell. “The Earth is big, the chance that it’s going to land on your head is pretty tiny.”

A piece of the same type of rocket is believed to have crashed on the Ivory Coast last year. While there was property damage, no one was hurt.

“We were lucky in the Ivory Coast that no people got hurt,” said McDowell. “But we can’t absolutely guarantee that. I am a bit concerned that there could be a bad day somewhere on Earth from this reentry.”

The 18th Space Control Squadron, which tracks the more than 27,000 objects in space, is providing round-the-clock monitoring of the Chinese debris and will post updates on Space-track.org.

The object’s speed and rotation make it hard to pinpoint just exactly where it might land.

“This rocket is barreling through space at 18,000 miles an hour. If you’re an hour out on your prediction of the reentry time, then you’re 18,000 miles out of reentry location,” said McDowell. “That’s why we probably won’t know until after it comes down which country even is getting a visit from this thing.”