A Pension For OPD Officer With PTSD – Now What? 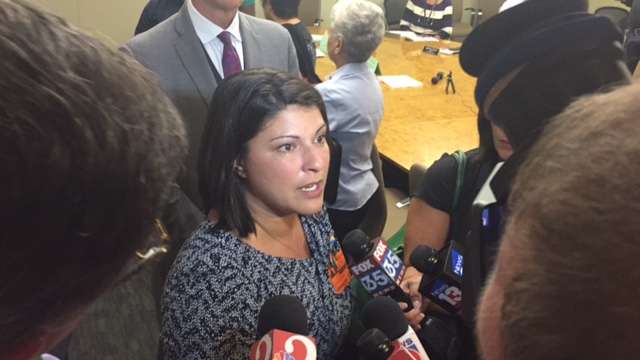 The Orlando Police Pension Board voted to give officer Gerry Realin a disability pension.

The Orlando Police Pension Board voted to give officer Gerry Realin a disability pension.

ABORAYA: Starting next month, Gerry Realin will get 80 percent of his pay, which is a big relief because the Realins have no income right now. The board made three rulings today: That Realin’s PTSD was a permanent and total disability, that it happened in the line of duty, and that since there was no limited job available, they voted to grant a disability pension. Now, they do reserve the ability to reevaluate Realin in the future to see if his PTSD is still disabling. The hearing was dramatic, though. Jessica Realin, Gerry Realin’s wife, held the hands of her attorneys and broke into tears after the vote.

“I just want to thank the community for coming out and supporting my husband,” Realin said. “I want thank all of those who took all the evidence into consideration. And that we will continue to fight for PTSD coverage because this isn’t over. I know there’s more, and I want them to know there’s hope.”

CHAVEZ: A lot of emotion in Jessica Realin’s voice there. Was Gerry Realin there today?

In one dramatic moment, McKillop read what Gerry Realin had told one of the doctors.

“Because I’m with the press, I’ll refrain from using the expletive used, the board can review that themselves,” McKillop said. “But it was expletive OPD. Expletive City. Expletive FOP, fraternal order of police.”

At that moment, Jessica Realin asked if they could take a break.

“Can I have a moment please, I’m sorry. I just can’t,” she said. She left the room in tears, and the board took a break.

CHAVEZ: A dramatic moment there. How did the attorneys for the Realins respond?

“The fact that the city has been so aggressive in their opposition to this pension is unprecedented,” Bichler said. “We find it offensive, the comments made here today. And what they put Mrs. Realin through was really beyond the pale. And I can promise you, we’re going to be looking closely at the transcript from this proceeding to determine what, if any, actions we would take as a result.”

CHAVEZ: Talking about results: Does Gerry Realin getting a disability pension set a precedent for other officers?

ABORAYA: Yes and no. The lawyer for the pension board says an event like Pulse is an unexpected event. And courts and pensions in New York and New Jersey dealt with this after the Sept. 11 attacks. So does it mean that an officer with PTSD from the Pulse attack could possibly have a claim? Yes, depending on how bad it is. But the attorneys are saying this does not necessarily open up the floodgates for officers to get a pension from the experiences that are a normal part of their job. And I should say, I’ve heard from several people who say that allowing an officer to get a pension for PTSD could be a slippery slope and could be expensive for taxpayers.

CHAVEZ: Leading up to this hearing today, we saw several democratic lawmakers voicing support for Realin. Who came out today?

ABORAYA: Seven people spoke today, saying the Realins should get the pension. Three lawmakers, as you mentioned, had representatives at the meeting. But we also support from Barbara Poma, the owner of Pulse nightclub, Orlando Torres, a survivor of the Pulse shooting, and Mayra Alvear, the mother of one of the victims.