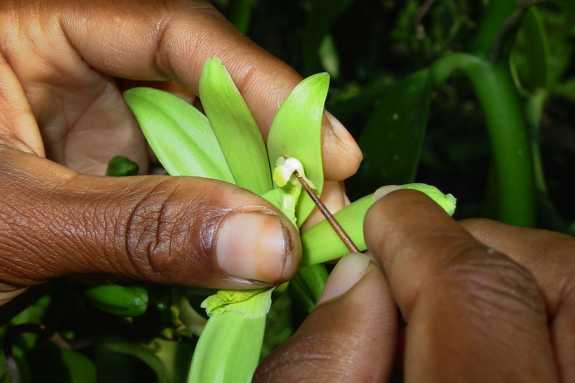 The orchids that produce vanilla beans have no natural pollinators in Madagascar; the plant must be pollinated by hand — a labor-intensive process with little margin for error.

Madagascar-grown orchids produce most of the world’s vanilla beans but vanilla extract isn’t manufactured in-country. Former Peace Corps volunteers-turned-entrepreneurs Tim McCollum and Brett Beach, co-founders of the Brooklyn-based Madécasse brand, aim to change that. They want to produce the world’s first “bean-to-bottle” extract, made entirely in Madagascar by local people using all-local materials — right down to the packaging. Although Madécasse is best known for its high-end, bean-to-bar chocolate from Madagascar, McCollum says the inspiration for his business came from vanilla.

You first went to Madagascar as a Peace Corps volunteer teaching English. What was your experience like there?

I entered the Peace Corps as a 22-year-old wanting to contribute to something bigger. I wanted to do something good. It was 1999 and I didn’t know the first thing about the place. I was sent to a post in a remote northeast coast town. I spent two years there.

I lived in a vanilla-growing region of the country. The landscape was beautiful. Every farmer had a vanilla farm. I knew it was the vanilla capital of the world. The children of the farmers were my students. Everything there was subsistence, but vanilla was one of the few cash crops. They would just bundle it for export. Everyone knows the price, who has the good beans, who’s a diligent farmer.

I remember the chatter, hearing the word for vanilla, la vanille. They’d be speaking the Malagasy dialect and then I’d hear “la vanille.” I only knew that everyone was talking about vanilla. By the next season, I knew what they were talking about — whether it was a good or bad season, what they planned to do with the money they earned. I could tell it was very important to the community.

You decided to go into business when you returned to the U.S. How did your experience in the Peace Corps lead to that?

It was very weird to return. I wanted to give back. The Peace Corps forever changes the way you perceive things. I realized I really wanted to understand business. What we’re trying to do in international development is raise the standard of living for some of the poorest people on the planet. The private sector has a big role to play in all this.

I became a financial adviser at American Express for two years and then spent four-and-a-half years in global brand management. Over those six years, I learned the fundamentals of business.

So American Express was my training ground in business, but there was not a day that I was not thinking about Madagascar and what could I do one day that would be more meaningful than volunteering. Brett [Beach] and I reconnected and started talking about starting a business in Madagascar that would be a little different. We started with vanilla.

What’s been your goal?

[Poverty] is not going to change until Africa starts making stuff. Madagascar produces 65 percent of the world’s vanilla crop but less than one percent of its vanilla extract. That’s what we want to change — that ratio. Next year we will attempt to bottle every unit in Madagascar. We bottle it now in Buffalo. We’ve had to work our way backward carefully in the supply chain and we’re about halfway there.

Madagascar exports the vanilla bean. What we really want to do is bean-to-bottle. It should happen within a few hundred miles of where the raw material is being sourced.

We built up the factories with suppliers that preexisted us. It is a partnership. They process the vanilla according to our specifications. There are very few large plantations, these are small farmers producing small amounts of vanilla. We go directly to the farmers, cut out the collectors, the layers in between. It’s an easy sell to get farmers.

Prices depend on the year, they are quite volatile. Farmers make the market price. We pay a 10 percent premium on top of it. We are working with a company there that helps us navigate and be more efficient.

What makes Madagascar vanilla stand out?

Madagascar vanilla is simultaneously smooth with a deep taste of vanilla. Usually you don’t find both together. It tastes better because it’s both richer and smooth at the same time.

How is it produced?

One of my best memories is from the vanilla harvest. It’s a once-a-year crop and when they harvest it, they need to sun-dry it out in the open. They all dry on the same table. Imagine 800 pounds of vanilla beans out in the open air with a gentle breeze. You could smell the vanilla scent from three or four miles away.

With both vanilla and cocoa farmers, they were never trained in food science. Some of them don’t have beyond a second grade education. Vanilla heritage is several generations deep. It’s almost like a religion. It’s passed down from generation to generation. Kids follow their parents as they tend to the crop. It’s a specialized process that’s hard to pick up and start doing. It’s not like farming corn. It’s the second most labor-intensive crop behind saffron.

The vanilla orchid flowers once a year. You need an acute sense of when it will bloom. If you miss it, you can’t pollinate. It must be hand-pollinated. There have never been bees in Madagascar that pollinate. Farmers use a stick with a small, pointy end, extract something and put it together to pollinate. It’s only in bloom a very short time.

Do Malagasy people consume vanilla in baked goods or is it simply a raw commodity to export?

People in Madagascar don’t have ovens. They’re preoccupied with feeding their families. Baking is a luxury, it’s not a necessity of life.