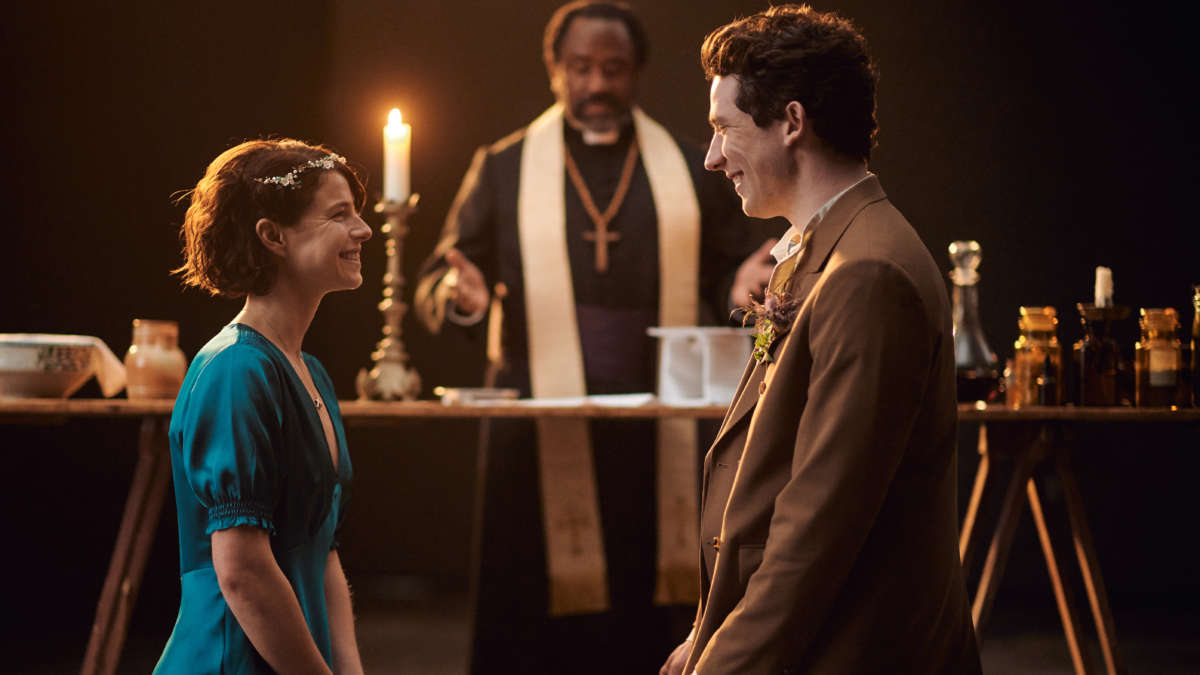 Why do people still perform Romeo & Juliet? That, to mangle a reference, is the question.

It’s not the question because there’s anything wrong with the play or with producing the play or with updating the play; it’s just, genuinely, a question. What makes things last? What makes people want to revisit them over and over? (And please don’t say “quality.” It is sometimes quality, but it is certainly not always quality, and even within the Shakespeare world but certainly outside of it, attempts to correlate greatness of work with cultural penetration and permanence will turn you into a human shruggie emoji.)

Perhaps it’s because a story of love and hate — and the awful work of trying to beat the latter with the former — always feels timely. And so it does now, as Great Performances on PBS presents a new take on the play. This version was intended as a theatrical run produced by London’s National Theatre for the summer of 2020; we know how that turned out. But rather than letting the planned production die on the vine, they decided to rethink it as a film for television.

The fundamentals, as they say, are sound: Josh O’Connor (recently seen playing a miserable Charles on The Crown) and Jessie Buckley (recently seen in, among other things, the Charlie Kaufman film I’m Thinking Of Ending Things) play Romeo and Juliet, not as starry-eyed teenagers but as lustful and trapped young adults. The rest of the cast includes Tamsin Grieg as Juliet’s icy mother, Lucian Msamati as the Friar who meant well, Fisayo Akinade as Mercutio, and Shubham Saraf as Benvolio. Director Simon Godwin had never directed a film, but he has a great theater pedigree — in fact, he’s currently the artistic director of the Shakespeare Theater Company right here in D.C.

This is an interesting and fresh production of the play that steers away particularly hard from any ingenue notion of Juliet; Buckley performs Juliet as a woman who’s trapped and bound by obligation, and her instant draw to O’Connor’s Romeo feels, for both of them, less like a twinkly starlight blush and more like the way grown and unhappy people can pull in the direction of each other for the simple reason that they have seen in someone else a glimmer of hope.

But what makes this film more than a fine addition to the tellings and retellings of Shakespeare is a timeliness that has little to do with Romeo & Juliet‘s foundational love and hate. Instead, because of the way it’s produced and shot, it serves as one of the most poignant and touching love stories about theater itself that could possibly come out of the devastation the pandemic has brought to live performance.

The cast and crew filmed in the Lyttelton Theatre in London, and when the play begins, it looks like a rehearsal: actors sitting in a circle, no sets or costumes or props to speak of, everyone looking like they just came in off the street. In the early going, skeletal structures stand in for real sets: an actor walks through a freestanding door with no wall around it or sits in an ornate chair in a huge empty and unadorned space. But little by little, as the story goes on, the theater becomes their Verona, their clothes evolve into minimalist but meaningful costumes, and what’s been imagined starts to become real.

It is my personal bias, I admit, that theaters are the closest things we have to magical places. Not just when they’re full of people, noisy with music and drama, but even when they’re not. Empty theaters seem to have memories, as if each performances that’s ever happened inside them left a few dust motes that are still floating around. People who work in live theater will break your heart when they try to explain what it has meant not to enter theaters at all for a year — partly because theater shutdowns represent economic devastation particularly for the most vulnerable among them, but also because if you want to see a romance that is passionate and beautiful and always seems on the verge of ending in disaster, spend some time with people who are reliant on the future of live performance spaces in 2021.

This is an effective and gripping production that pushes you, as the best R&Js do, in the direction of thinking, “Don’t do it! Don’t take the poison!” even when you know he will take it, because he must, because that’s the play. But it’s also a moving document that shows the cavernous spaces and folding tables and impossibly high walls and ceilings that make theaters haunting and beautiful. May we all be together in their thrall very soon.