A northern extension of the Florida Turnpike is moving ahead, despite public opposition 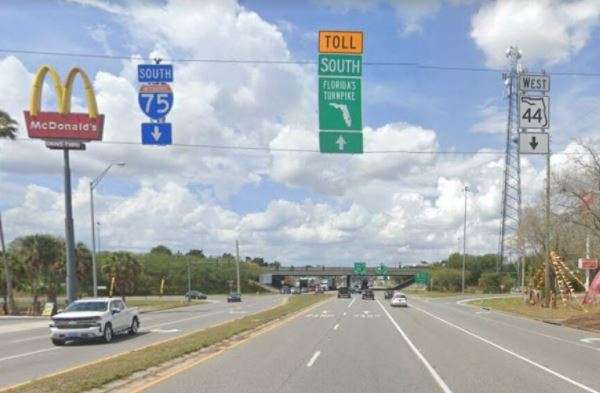 State transportation officials are moving ahead with plans to extend the northern end of the Florida Turnpike beyond where it now ends at Interstate 75 in Wildwood. (photo by: Google Maps/WUSF)

The state Department of Transportation held a “kick-off” public meeting on plans to extend the Florida Turnpike north.

State transportation officials are moving ahead with plans to extend the northern end of the Florida Turnpike beyond where it now ends at Interstate 75 in Wildwood.

Several alternative routes were presented during a public meeting Tuesday night in Chiefland, in Levy County. Jeff Arms is the program manager for the Turnpike Authority.

“The project study area includes Citrus, Levy, Marion and Sumter counties,” he said. “The project is early in the planning phase, and is following the Florida Department of Transportation alternative corridor evaluation process.”

Three proposed routes for the Turnpike extension (photo by: Florida Department Of Transportation)

Earlier this year, state lawmakers eliminated a toll road proposed for southern Florida. But they kept this and an extension of the Suncoast Parkway north in the planning process.

Community task forces found little need and scant public support for any of the toll road projects. Arms said those reports will be taken into consideration.

“The project will consider previous studies and reports,” he said. “In fact, the section of Florida Statutes actually states that the Turnpike Enterprise shall take into consideration the guidance and the recommendations of any previous studies or reports, including but not limited to the task force reports.”

Opponents say there is little need for the toll road and it would destroy some of the last remaining rural areas north of Tampa Bay.

Several groups continue to rally opposition to the toll roads, saying it would destroy some of the area’s last remaining rural lands and threaten Rainbow Springs, one of the state’s largest springs.

Here’s a statement from the No Roads To Ruin Coalition, which was formed to oppose the toll roads:

“If built, this extension would destroy large swaths of Florida’s last remaining rural lands, threaten waterways with pollution, endanger iconic wildlife, disrupt farmlands, and promote unsustainable sprawl. It is no surprise that of nearly 10,000 comments submitted to the Florida Department of Transportation regarding proposed M-CORES toll routes, 93% were opposed.”

“Florida’s remaining natural areas are worth more than the sum of their parts. Residents in counties like Citrus, Levy, Marion, and Sumter know that when we start paving over our rural heritage and wild places, there is no turning back.”

Another public information session is scheduled for this summer. A full report is expected to be on the governor’s desk by the end of 2022.

(photo by: Florida Department Of Transportation)