‘A New Reality’: Students And Teachers From Puerto Rico Start Over In Florida 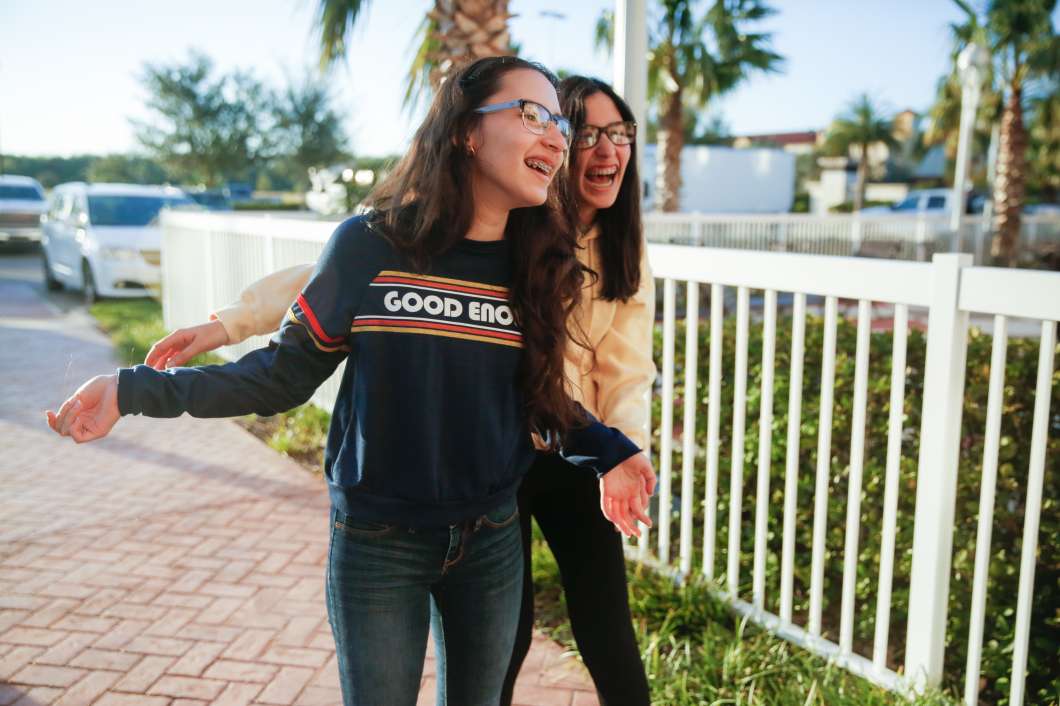 Sisters Darianne, 16 and Yerianne Roldán, 17, moved from Puerto Rico to Orlando with their family for school.
Image credit: Elissa Nadworny

It’s 5:30 a.m. and dark in the fifth-floor hotel room, just a few minutes drive from the Orlando airport. There are still 20 minutes before the entire family needs to be downstairs to enjoy the free breakfast in the hotel lobby, then they’ll be driving the 15 minutes north to school — first period starts at the “very early” time of 7:20.

This has been the daily routine for nearly two months since Yerianne Roldán, 17 and her sister Darianne, 16, arrived in Orlando from western Puerto Rico in the aftermath of Hurricane Maria.

They’re staying in this hotel room with their mom, Yesenia González, and their stepdad, Eliud Peña. Their bright hotel room is clean — thanks to the daily turndown service — and pretty standard, albeit for the food stashed under the bedside table, and the piles of suitcases and random belonging stacked in the corner.

“This is a new experience and if you don’t have experiences you don’t have a life,” Peña says. He brought the family to Orlando because he has family in the area. “It’s a story for the girls to remember forever, they can tell their children one day.”

It’s a story the girls would definitely rather tell, than live through. Yerianne, the older, more reserved sister says they’re still coming to terms with their new reality.

“We only had an hour to say goodbye to our families,” she says, “I’m just really worried … most of my family are elderly.”

Yerianne’s younger sister Darianne says the first days here were the hardest. “In my mind, I was like, ‘Ok this is only temporary. I’m only going to stay here for a month and then I’m going back.’ ” But that’s not what happened. This is my life now, she tells me, showing me pictures of her new school friends on her smartphone. Darianne celebrated her 16th birthday in the hotel — the cleaning staff made a three-tiered cake out of towels and room service left a slice of chocolate cake.

Their family is not alone: Schools in Orlando have enrolled nearly 2,000 Puerto Rican students who’ve fled the storm-ravished island. Most don’t know when or if they’ll ever go back. Their stories are heartbreaking. Their future in limbo.

“They thought we were talking about immigrants,” she explains, “but these are citizens of the United States and they are welcome here and we will take every last one of them into our classrooms immediately. They are our children. We will never run short on compassion.”

That compassion runs deep at Colonial High School, where Principal Jose Martinez has already enrolled nearly 100 students from Puerto Rico and the Virgin Islands. That’s where the Roldán sisters are enrolled. More than half of the 240 faculty and staff members there have family ties to Puerto Rico — including Principal Martinez.

That’s why every chance he gets, he reminds the students: “My family was you, my grandparents were you, my cousins were you. And though you may be leaving some of your family behind, you’re carrying them with you in your hearts.”

And it’s a welcome reminder — because the students who recently arrived in Florida are still pretty shaken up. Many of them share their first period of the day together — a class taught by Spanish teacher Johanna Lopez. One of their assignments is to present their short-term goals to the class. Many have similar agendas: Get good grades. Join the soccer team. Apply to college.

Zuleyka Avila, 17, starts her presentation off with a nervous smile. She wants to go to college, and one day become a pediatrician. She’s still wishing she were back in Puerto Rico, but after living in Orlando for the last few weeks, she’s not sure if she ever will. She says her mom doesn’t want to go back. She feels lost. Alone.

Oxzuen Casta Rodriguez, a fellow student, knows exactly how that feels. He’s just not sure he wants to show it.

And that feeling of being overwhelmed is slowly subsiding, the students say. At Colonial, there’s a spirit week that culminates in Homecoming, events that slowly make the students feel connected to the school community. On Halloween, Darianne, who is sharing the hotel room with her family, even dresses up in costume — posting photos with her new friends on Snapchat.

“If you’re living somewhere and there’s an earthquake, hurricane, tornado or some kind of disaster, you might think you’re in despair,” explains Rebekah Felix Lambert, who came from Río Piedras, Puerto Rico. “But there will always be help there. Something good is going to come out of the bad.”

In order for the district to support the influx of new students, they need more staff. It’s a natural progression then, that as many adults leave their homes on the island and come to Florida, the school district has been at the airport — literally — hiring them as they arrive. So far, Orlando has hired 51 people, including classroom teachers, paraprofessionals and bus drivers — all from Puerto Rico.

“We’ll be creative in hiring them,” says Jenkins, the district’s superintendent. “That might mean they could start as a substitute teacher until we find those credentials or gather what the state requires for their license.”

Like many teachers who left Puerto Rico after Hurricane Maria, Yara Ramos applied for a job at the airport, next to empty ticket counters in a once-vacant terminal. She’s a veteran teacher from Camuy, Puerto Rico who arrived in Orlando with her four children, still ambivalent about her career.

“I miss my people,” she says, crying. “They’ve been my co-workers for over 10 years. It’s family too … my classroom, it’s probably there the way I left it, with everything packed in bags — all my computers were sealed.”

She pauses for a moment, “I’m not coming back,” she says, trailing off.

She’s waiting for her relatives back home in Camuy to send her the documents she’ll need to be hired as a licensed classroom teacher.

In the meantime, she’s starting over again as a paraprofessional at a middle school just west of downtown Orlando.

That’s despite her 10 years of teaching experience. And yet, it’s a full-time job, which means she can move out of her brother’s house — where she’s been living for more than a month — and start putting her life back together again.

As Ramos settles in, the Orlando school district is bracing for a second and third wave of students and teachers from Puerto Rico. The message will be the same as it was two months ago: Our doors are open.