A New Picture Book Reminds Black Sons: You Are ‘Every Good Thing’ 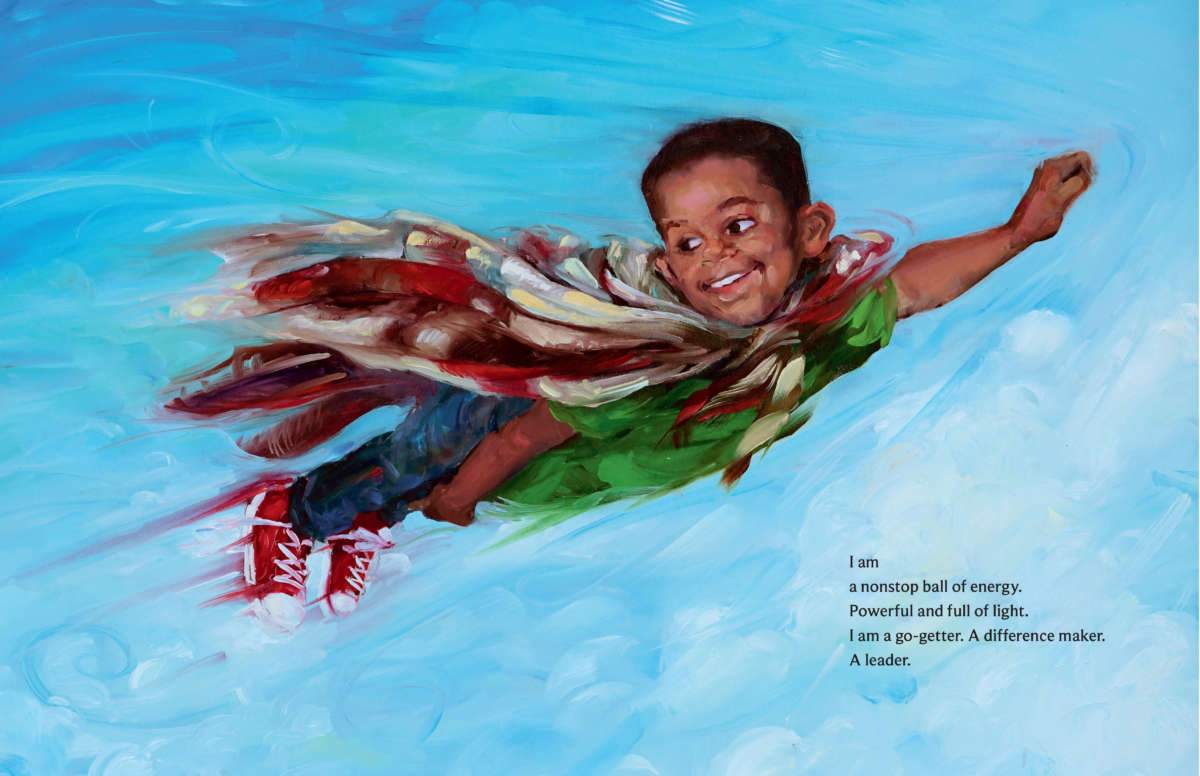 "I am / a nonstop ball of energy. / Powerful and full of light. / I am a go-getter. A difference maker. / A leader."
Image credit: Derrick Barnes and Gordon C. James

The kids in I Am Every Good Thing are compared to the best things: moonbeams on brand new snow, the center of a cinnamon roll, a perfect paper airplane that glides for blocks.

When Derrick Barnes first started writing children’s books 15 years ago, he didn’t see Black kids — and Black boys in particular — being depicted in this way.

“Whenever you saw a black male character in children’s books, he was either playing basketball, he was a runaway slave, or just visually looking very docile or assimilating,” Barnes says.

Barnes has four sons of his own and he wrote his new book to be empowering and affirming — two bounces and a front flip off the diving board on a Saturday morning affirming. “I compare our sons to things that are universally good … to show America that our boys have just as much value as your sons,” he says.

Illustrator Gordon C. James says he sought to “celebrate the beauty, the power, the elegance, the grace, the brains of these children.”

James and Barnes last worked together on their 2017 book, Crown: An Ode to the Fresh Cut, but they actually go back 20 years — they used to work at Hallmark Cards together. Because they’re friends, James says there’s “probably more back and forth” than in the average picture book project.

Barnes knows that James is always drawing. “Whenever we’re together in between book signings … he’s sketching in a sketch book,” Barnes says. “So his mind is constantly working.”

As he started working on I Am Every Good Thing, James decided that he wanted the illustrations to depict not just one child, but many. “When I read it, I imagined it being just all these different boys representing every boy,” James explains.

So he hired models and got to work with his oil paints.

“Most of the boys that you’re going to see in here, they’re real people,” James says. The illustrations show children of different ages, sizes and skin tones. They are pictured alone, with friends and with family.

“It is a difficult job to get the full picture of a people — or even of a segment of people — but that’s what I was trying to do,” James says. “And I did it with full color, a lot of emotion, painterly strokes.”

For Crown, James depicted Silas, one of Barnes’ sons on the cover. For the cover of this new book, James painted his own son, Gabriel. He’s standing arms crossed, looking tall and proud.

“My son is autistic, and so he doesn’t often get asked to do things or asked to be the center of things,” James says. It was powerful to illustrate his child “looking like how I feel he sees himself and how we see him as his family.”

“It was very important to us to have a black boy on the cover that had a very confident look — like this boy could come from any American environment or neighborhood,” Barnes adds.

James and Barnes talked about how this deeply positive book was in many ways “a reaction to something negative.” James consciously depicted the characters in places like swimming pools and classrooms, where Black children have long faced racism and prejudice.

“I wanted through the illustrations for these kids to feel empowered …” James says. “I want them all to feel like they belong everywhere, like there are no limits to the places they should be, or the things that they can be. No part of this life — this full, amazing life — should be off limits to you just because of who you are.”

Melissa Gay edited this interview for broadcast. Beth Novey adapted it for the Web.