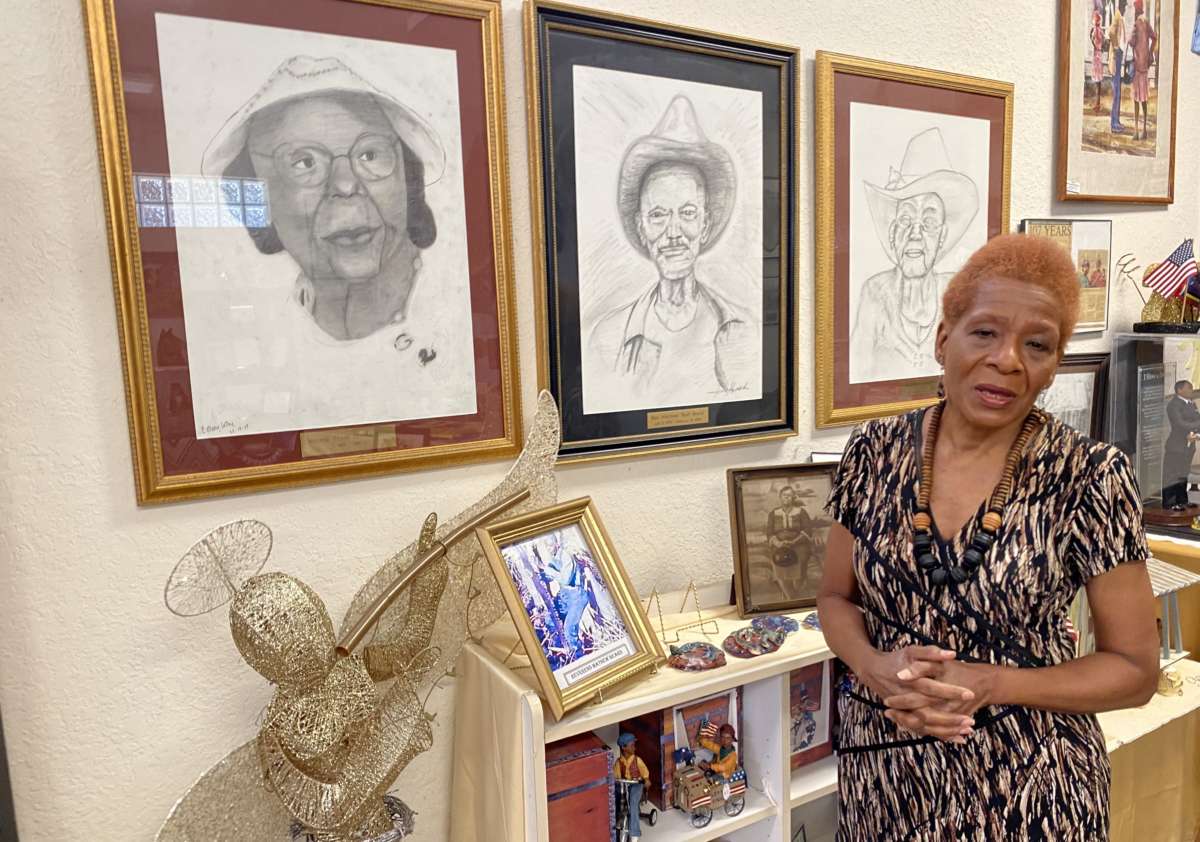 Beverly Steele is an advocate for the history of Royal. Photo: Joe Byrnes, WMFE News

No matter which proposed route you look at, the northern extension of Florida’s Turnpike could destroy the African American community of Royal in Sumter County.

And while the Florida Department of Transportation now says it will tweak the routes to minimize the impact, residents are worried.

“Oh, this place here is a historic place.,” he said. “And we don’t think we could ever find another place to replace Royal.”

Keiler worries he could lose his house. The state is planning a northern extension of Florida’s Turnpike. And all the proposed routes have one thing in common: they plow right through the heart of Royal.

They would take out Keiler’s home, the Baptist church, the African Methodist Episcopal church, the community center and the park.

A historical marker can be seen in Royal at the site of a former school — only the cafeteria remains, as a historical center. There’s a community center and park on the site now. Photo: Joe Byrnes, WMFE News

Royal is a historically Black rural and agricultural community — with a tradition of property ownership in 40-acre and 80-acre land grants passed down from generation to generation. In Royal, the family’s land ownership is everything.

“I remember when ladies used to have to walk all the way from Royal to Oxford to work for a couple of dollars a day,” Keiler said. “And they would always talk about, ‘I got to pay my tax.’ And it’s very important that we can keep Royal because those people sweat many days to keep this community.”

Keiler’s neighbor is 97-year-old Annie Johnson. She and her late husband were farmers raising cattle, hogs and chickens.

Johnson says they supplied the town of Oxford. Five generations of her family still live in Royal. Her great-great-great grandson plays in the other room.

” It was beautiful,” said. “We wasn’t rich but I wouldn’t have took nothing for it. Nothing in the world.”

‘Stay out of Royal’

Road builders have hurt Royal in the past. At an intersection down the road, you’ll find a scattered collection of tilting, moss-covered tombstones.

Keiler says families from Royal used to take bodies by wagon to that old cemetery. “It’s a shame,” he said, “how they, you know, put a road right down through the graveyard and destroyed all the graves.”

And then there’s Interstate 75, which sliced through Royal in the 1960s. A single overpass has kept the two halves of the community connected.

In 1998, residents and the County Commission stood against an earlier plan to route the turnpike through Royal.

Now, once again, residents are rallying against the turnpike — supporting the “No Build” option but really focusing on protecting their community.

She runs a nonprofit and works in the historical center, where the walls are lined with books, exhibits, maps, framed articles, photos and portraits of Dr. King and the Obamas. Many years ago, she returned from corporate offices in New York to take care of her mother, who is now a hundred years old.

‘Ownership of the land’

The connection to elderly family members sustained Royal, Steele said during  an interview at the center. “What they had was ownership of land. So they wanted to keep it and then pass — that’s all they could pass down through the generations. So they stayed here. So there was always someone here out of all these families that maintained in the community and maintained the land.”

Shortly after the Civil War, former slaves settled here and it was known as Picketsville.

“The story says that our people came from the Old Green Plantation — I love saying it that way, my aunt says it that way — next to the Withlacoochee River,” Steele said.

By 1891, when a post office was established, it was called Royal.

Second Bethel Baptist Church is one of two longstanding churches that could be destroyed under proposed routes for the northern extension of Florida’s Turnpike. Photo: Joe Byrnes, WMFE News

Steele said an old story handed down by white settlers in the late 1840s tells of a community here of freed Africans.

“And they had already named it Royalsville,” she said,”because they were kings and queens in Africa and they wanted future generations to remember that they came from royalty.”

Steele is leading an effort to add Royal to the National Register of Historic Places as a rural historic landscape.

University of Central Florida anthropologist Edward Gonzalez-Tennant has worked on their application with the Florida Department of State.

“Generally,” he said, “this remained small-scale, family-based farming, tobacco and other crops, cash crops, of course, that the residents grew and processed with their own hands on their own properties, carried them to nearby towns. And that’s how they made their livelihoods.”

Gonzalez-Tennant says many other rural African American communities in Florida disappeared amid racial violence and migration to cities. He points to Rosewood, which was destroyed by a racist mob, and Santos, where Black property owners were bought out for a Cross Florida Barge Canal that never came.

Gonzalez-Tennant says plans for the turnpike in Royal reflect a pattern seen throughout the U.S. A lot of minority communities — like Parramore in downtown Orlando — have been devastated by new highways.

“Today in the 21st Century, when we sit here and look at Royal and we see that it survived to the present,” he added, “we have a very unique example of a Florida African American community.”

Residents found out about the turnpike when they received letters from lawyers who specialize in eminent domain cases. That’s when the government takes private property for a public use.

Since then, community members, the city of Wildwood and Sumter County have brought the impact on Royal to the attention of FDOT planners. The city and county propose a route crossing I-75 south of Royal. That could still take out the western side of the community, where a new landowner is pursuing industrial zoning related to the turnpike.

FDOT says it’s listening to the concerns. A department spokeswoman says the initial maps did not take Royal’s historical sites into account. In an email, she says the department will “refine the corridors to minimize the impacts” on Royal.

On a wall in the historical center hang sketched portraits of Peggy Davis, the Reverend Matthew Beard and Polly Patterson-Wideman, known as “Big Mama,” all residents of Royal who lived for more than a hundred years.

Steele calls it the wall of honor.