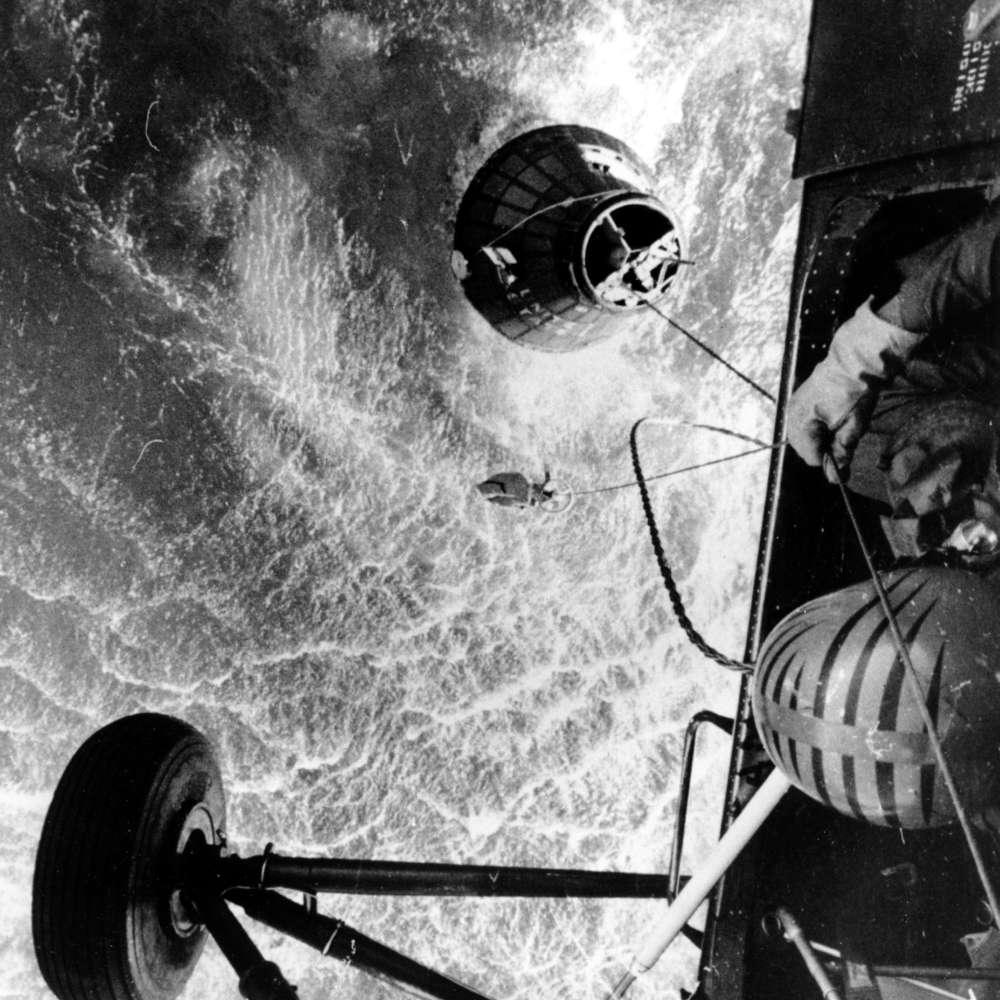 A U.S. Marines helicopter hovers over the Atlantic ocean during an attempt to retrieve astronaut Gus Grissom's Liberty Bell 7, which sank 15,000 feet shortly after splashdown on July 21, 1961.

Anyone who’s seen the 1983 film The Right Stuff might remember the scene where astronaut Virgil “Gus” Grissom (played by actor Fred Ward) nearly drowns after splashdown when the hatch on his Mercury capsule unexpectedly blows, flooding the spacecraft with seawater.

The movie — and the book by Tom Wolfe that it was based on — suggest that Grissom panicked and manually triggered the explosive bolts that open the hatch, despite the astronaut’s insistence in debriefs following his 1961 flight that it was caused by a mechanical malfunction.

Despite Grissom’s apparent vindication in a NASA post-flight review, the question of the blown hatch has persisted, at least in the mind of the public — thanks in large part to The Right Stuff.

Static electricity may have been to blame

George Leopold, who wrote a biography of Grissom, and Andy Saunders, a space photo expert and author, write in Astronomy magazine that they believe the mystery can be put to rest once and for all.

The researchers say that before his 2020 death, U.S. Marine Corps Lieutenant John Reinhard, who was co-pilot of the recovery helicopter sent to retrieve Grissom and the Mercury capsule, said he remembers seeing something unusual just before a pole was extended to cut an antenna on the spacecraft as part of the procedure to latch onto the capsule.

“When I touched the antenna there was an arc,” Reinhard said. “At the same time, the hatch came off. It could be that some static charge set [the hatch] off.”

Static electricity is a known issue for spacecraft following reentry. The authors note that salvage expert Curt Newport, who recovered Grissom’s Liberty Bell 7 capsule from the bottom of the Atlantic Ocean in 1999, has said that the hatch mechanism on the capsule likely contained mercury fulminate, a compound that can be detonated by a static charge. A NASA manual “makes several references to static electricity as a safety concern,” Leopold and Saunders write. “The manual also urges designers to ‘prevent inadvertent initiation’ of spacecraft pyrotechnics by ‘electrostatic discharge.'”

Francis French and Colin Burgess, write in their book Into That Silent Sea that “the astronaut had to activate a switch in order to arm the mechanism. … a recovery loop on top on the capsule became the trigger. When the recovery helicopter’s hoisting cable was hooked onto the loop, the pressure created by lifting the capsule fired the mechanism and blew the hatch off.”

Leopold and Saunders say their analysis of enhanced footage corroborates Reinhard’s sequence of events — that the hatch activated before the helicopter hooked onto the capsule (shown by the grainy footage below, they say).

They conclude that the arc Reinhold observed was an electrical discharge that caused the hatch firing mechanism to malfunction.

The sinking may have sealed Grissom’s fate years later

Years after his Mercury mission, Grissom — a test pilot who had flown 100 combat missions during the Korean War before joining NASA — was chosen to command the first two-person flight of the Gemini program. He was slated to do the same for Apollo 1 when he and two other astronauts were killed in a fire that swept through their capsule during a ground test.

With Grissom’s Liberty Bell 7 flight in mind, engineers designing the Apollo spacecraft opted to omit an explosive hatch on it and instead install a manual hatch which could only be opened by ground crew. Tragically, some speculate that may have prevented Grissom and his crewmates, Edward White and Roger Chaffee, from getting out of their Apollo 1 spacecraft during the sudden pad fire that killed them in 1967.