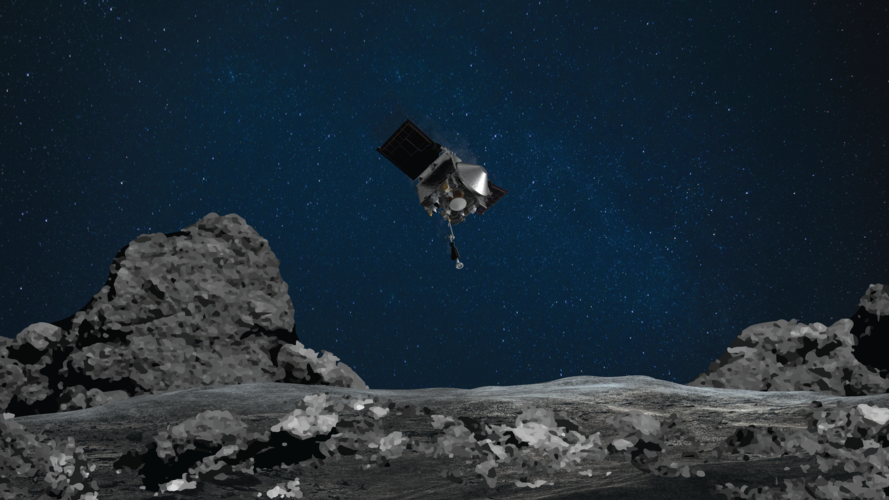 An artist's rendering shows NASA's OSIRIS-REx spacecraft descending toward the asteroid Bennu to collect a sample of the asteroid's surface.

A NASA spacecraft sent out to collect a sample of rock and dust from an asteroid has nabbed so much that it’s created an unexpected problem.

Rocks are jammed in the device in a way that’s keeping a Mylar flap open, creating a gap that’s letting some of the collected pebbles and dust drift out into space.

“We had a successful sample collection attempt — almost too successful. Material is escaping,” says Dante Lauretta of the University of Arizona, the principal investigator for the OSIRIS-REx mission. “We think we’re losing a small fraction of material, but it’s more than I’m comfortable with. I was pretty concerned when I saw these images coming in.”

To prevent any further loss, the team is now preparing to stow the sample collection device quickly into its return capsule, possibly starting the stowing process as soon as Tuesday. The capsule is expected to return to Earth in 2023.

Researchers believe they collected hundreds of grams of material, but they won’t know for sure until the capsule returns to Earth.

They had been planning a maneuver that would spin the spacecraft and let them make a precise determination of how much rock and dusty material they’d gotten. The thinking was that if they hadn’t managed to collect much, they might have another go at touching the asteroid in January and getting some more.

But they called off the spacecraft-spinning trick when they realized that the collector is so full that material is jamming it open and that stuff is being lost.

That’s because they want to minimize the spacecraft’s movement until the rock and dust sample is safely sealed up in the return capsule. “It would risk loss of material,” Lauretta says. “We have enough evidence of successful sample collection.”

Nothing like this problem was ever seen in simulations of the mission that the team did on Earth, he says. It’s now looking like the collection device must have penetrated farther down into the asteroid’s surface than expected — perhaps as deep as 48 centimeters, or about a foot and a half.

“I basically directed the team to put as minimal activity on the spacecraft as necessary and start focusing on the early stow of sample,” Lauretta says. “It’s very exciting, very surprising, but overall, excellent news.”