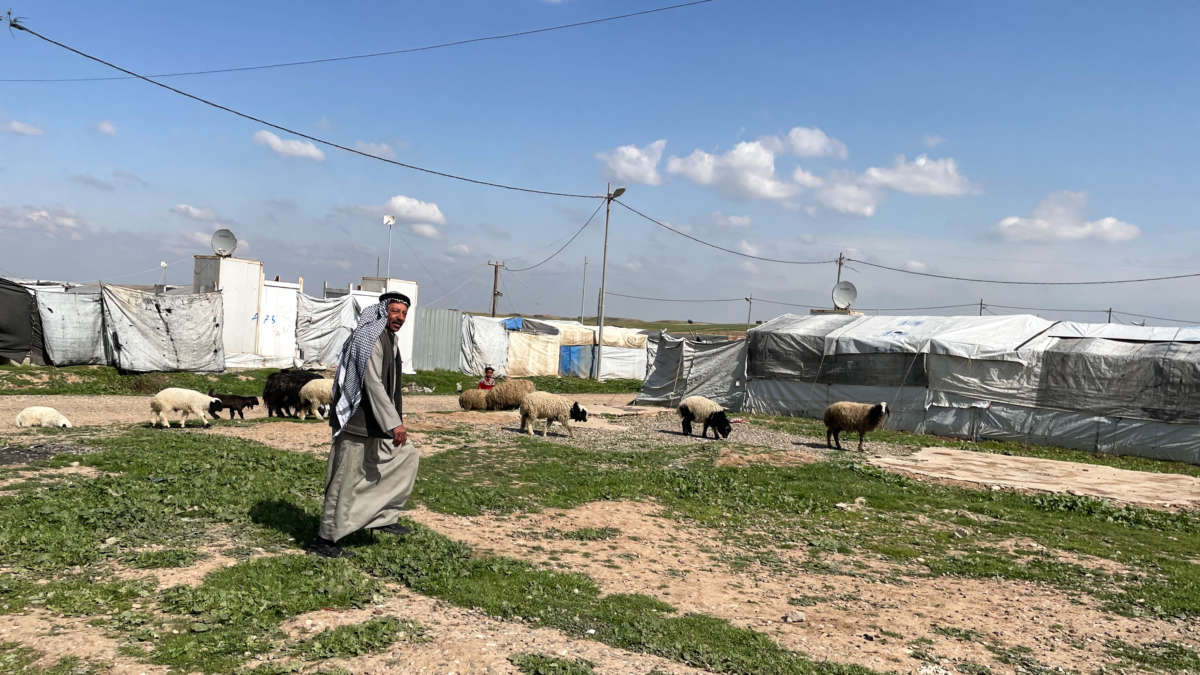 Hassan Sham (pictured above) is one of 26 displaced persons camps in northern Iraq. Most of the residents are the wives and children of ISIS fighters — who say they are considered outcasts because of the stigma and are no longer welcome in their hometowns.

The camp for displaced persons sits in a dusty limbo in northern Iraq, in between security checkpoints that separate Iraq’s Kurdistan region from the rest of the country.

Most of the residents of the Hassan Sham camp are the wives and children of ISIS fighters. And they sit in limbo, too.

“If this camp closes, where would we go?” Noora Majeed, a mother of 4 originally from the city of Mosul, asks. Her voice is just a few decibels short of a yell. “Nobody wants us,” she says.

Majeed and the other residents say they are outcasts. They say they’re no longer welcome in their hometowns. Police, militias and former neighbors harass them, they say.

“Nobody welcomes us,” Majeed says. “Nobody takes us in. They don’t like us. Even my family. None of them.”

Standing outside her canvas tent surrounded by a group of children, including four of her own, Majeed says she can’t return to her old neighborhood in Mosul.

“We are afraid to go back there,” she says. “They say you are the wives of ISIS. They harass us.”

Her husband, she says, was an ISIS fighter who now is dead. And the stigma of his ISIS association is so great that even her own family — the bedrock social safety net in Iraq — refuse to have anything to do with Majeed or her children. So instead they live in one of the white, canvas tents provided by the U.N. and USAID.

Majeed and her kids have been in the Hassan Sham camp for five years. With nowhere to go, she has no idea when she’ll be able to leave. And she and her family, like all the residents of the camp, face mounting health and education issues.

Left behind after the war to oust ISIS

To understand why the camps exist, you have to look back to 2014, when ISIS leader Abu Bakr al-Baghdadi stood in a mosque in Mosul and declared the creation of the Islamic State of Iraq and Syria. The so-called caliphate would come to control nearly a third of Iraq and much of northeastern Syria. The militant group and its extremist interpretation of Islam attracted followers from all over the world, including many disillusioned Sunni Muslims from Iraq.

Three years later, after a brutal war to oust ISIS, Iraq declared victory over the group. Many of its fighters fled to Syria. Others ended up dead or in Iraqi prisoners. The wives and children of ISIS were left behind. Hundreds of thousands of them ended up essentially in refugee camps in the country where they’d been born.

In 2020, Iraq shut down all of the camps for so-called “internally displaced persons” in portions of the country controlled by Baghdad. But authorities in Iraqi Kurdistan have said they won’t force any of the camp residents to leave if they don’t want to.

While some of the camp residents like Majeed and her children have lived there for years, others arrived just this year from the massive al-Hol camp in Syria. Al-Hol holds about 60,000 people who’d been affiliated with ISIS. Early in 2022, it saw deadly attacks by ISIS sleeper cells, targeting workers and those in the camp they have disputes with.

Obstacles to getting food, health care – and an education

Life is difficult in all of these camps.

At the Hassan Sham camp the only consistent assistance to the residents is a monthly stipend of $12 each month from the World Food Programme. Majeed and her neighbors say this isn’t enough to live on. One of Majeed’s sons digs up wild roots from the surrounding plains to sell for food as a way to earn extra cash.

“These kids are innocent,” Majeed says of the children gathered around her. “They didn’t choose to join ISIS.”

The deputy manager of the camp, Haniya Baka Othman, says conditions in the camp are growing worse as funding for food, education and health care dries up.

“Health, it’s too, too bad,” Othman says. “We have just one center for health. They receive approximately 500 patients each week.” But the donor that was funding the health clinic just announced that it’s terminating its contract.

The high school doesn’t have money for teachers so roughly 200 teenagers in Hassan Sham walk down the road each day to another camp to study.

There’s a school for younger kids but it’s funded by the Iraqi government and only children with government identification can enroll. Many of the kids at Hassan Sham were born in territory under the control of Islamic State and don’t have IDs.

Othman says roughly 40% of the camp residents — adults and children — have no identification. That means the kids can’t go to school and the adults can’t pass the security checkpoints on the roads leading in and out of Hassan Sham to visit a doctor, go to work, go to university.

A Swedish aid group tried to launch a campaign to get residents IDs a couple of years ago, Othman says, “But the Iraqi government didn’t accept that because they are the families of ISIS.”

This camp was founded by UNHCR, the U.N. refugee agency, and is now administered by a local charity. But the Iraqi government in Baghdad has made it clear that it wants these camps too close and for the residents to find someplace else to go.

Even as Iraq transfers additional ISIS families here from camps in Syria, it’s the government has declared that anyone who arrived after November of 2020 isn’t eligible for food stipends.

“So when they bring assistance for the residents, they exclude those family that came after this date,” she says.

A young man waits and dreams

Many Iraqis view the residents of these camps with suspicion.

The violence that ISIS unleashed in 2014 is still fresh in most Iraqis’ minds. The conflict drove millions of people from their homes and left thousands dead. And ISIS continues to launch sporadic attacks in Iraq and in January staged a brazen jail break across the border in Syria.

“They have no affiliation with ISIS,” the deputy minister told NPR. “They have been checked by the security forces and they have no problem.”

Residents of the Hassan Sham camp say the lasting stigma of ISIS and other problems prevent them from leaving the facility.

Othman says some of the women have warrants for their arrest — there are lots of different charges, including supporting a terrorist organization. So they can’t even leave the camp for medical care.

Two sections of the camp house young men who were child soldiers with ISIS. They’ve served sentences in juvenile detention, some of them on terrorism charges. Given the disjointed Iraqi justice and security system and the multiple forces that report to different administrations, the young men could face additional charges if they attempt to go home. So Hassan Sham serves as a landing spot for them after juvenile hall.

With nothing else to do, 23-year-old Jowhar Adel says he and other young men sleep late, scroll on their phones, play soccer in the afternoons.

Adel, who was sent to juvenile detention on terrorism charges for being an ISIS fighter, says he has no desire to rejoin the group. “We want peace,” he says. “We don’t want to interfere in anyone else’s life and we don’t want anyone to interfere in ours.”

If he does get out of the camp, he hopes to find employment as a construction worker or a mechanic.

He blames the U.S. for his predicament, pointing to the 2003 invasion that toppled Saddam Hussein and, he believes, led to the humiliation of Sunni Muslims in Iraq and the rise of ISIS.

Meanwhile, Adel has no idea if or when he’ll be able to leave.

“This is just a different kind of prison,” he says.