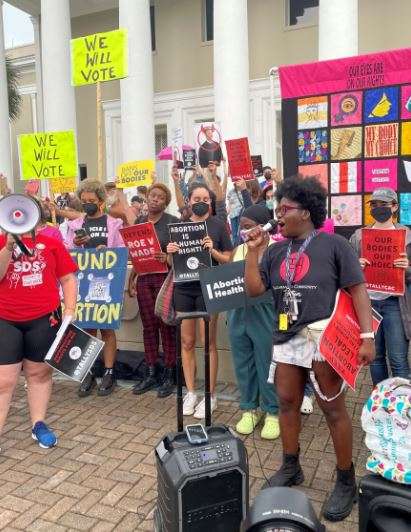 A new Florida law that bans most abortions after 15 weeks is set to go into effect at the end of this week unless a judge approves an injunction to temporarily put the law on hold.

One of the few exemptions under the new law allows abortions when the life of the pregnant person is in danger, but Doctor Shelly Tien says that could create more risk. She uses the example of bleeding, which can be common and resolve on its own, or can become severe. In that case, Tien says the standard of care is to end the pregnancy.

“It is the standard of care to be proactive on acting on bleeding. We know that pathology is a spectrum that can accelerate within a couple of hours within an afternoon, and so to wait until the very moment in which a patient is about to have permanent damage from bleeding—permanent kidney failure, a heart attack, a stroke, is antithetical to good patient care,” Tien said.

Tien is a gynecologist and abortion care provider. She spoke as a witness for the plaintiffs during Monday’s hearing.

Judge John Cooper heard testimony from witnesses on both sides of the issue. He says his job is to look at case law and precedent from the state as he considers his ruling.

“Do both sides agree that it’s not my function to predict what the supreme court might do in the future,” Cooper asked. “That would be called activism wouldn’t it?”

Supporters of the ban hope if the case moves to the Florida Supreme Court, the new more conservative justices now on the bench could hand down a different interpretation of the privacy clause. Lawyers will return to court Thursday for more arguments.

A bench ruling could come as soon as the hearing concludes.