A Healthy Escape From Jail For Florida Inmates 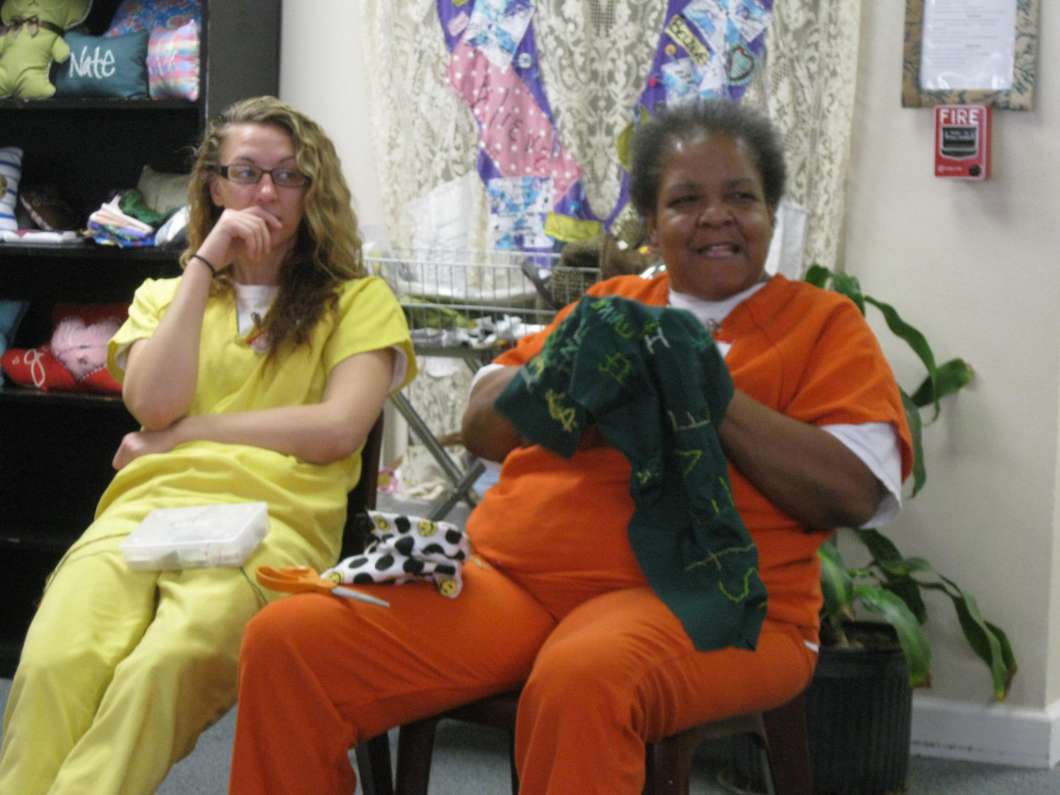 About 50 percent of women in the criminal justice system have experienced some kind of physical or sexual abuse in their lifetime. A program at the Pinellas County Jail uses a ‘sewing’ circle to help them work though the problems.

This is a warm, welcoming place. Big windows let the sun shine in. It’s shabby chic, with gauzy curtains and prayer flags hung along the walls. The room feels a lot like a church basement–someplace you’d go to talk and laugh and reconnect.

Women gather in a circle of chairs, and their hands reach for thread, yarn, and bolts of fabric. Then, they start sewing.

This place is called the Red Tent. And these women are inmates at the Pinellas County Jail.

Barbara Rhode founded Red Tent in 2012 after spending several years as a facilitator with a local work release program. There, Rhode became convinced that most incarcerated women had trauma in their backgrounds. Specifically untreated, undiagnosed Post-Traumatic Stress Disorder.

“The women would share horrific stories about childhood sexual abuse, date rape,” said Rhode. “A few stories where mom would lend them to the neighborhood pedophile in exchange for drugs. And that’s what they grew up with.”

Rhode came to the Pinellas County Jail with a proposal. She would volunteer her time, hire a part-time counselor with money out of her own pocket, and teach women inmates about the long-term effects of trauma and ways of coping with stress.

Red Tent has been a blessing for Audrey Myers, a 59 year-old woman serving time for grand theft. This past December, Audrey fell and broke her kneecap. She was moved to the jail’s medical unit.

“In medical, you know, people are detoxing, they’re very sick, they’re homeless,” said Myer. “And so their whole conversation is jail, prison, or drugs, which I don’t wanna talk about none of that.”

In Red Tent, the conversations are different. Here, Barbara Rhode guides the group in a meditation exercise.

“So, mindfulness is all about being present in the moment. That’s all we’ve got ladies is this moment,” she tells the group.  “Feet on the floor. Hands resting in your lap. Progressive muscle relaxation starts with some good, deep breaths.”

For a few seconds, the women fidget in their seats. Some smirk, or struggle to hide nervous laughter.

They grow quiet. Rhode’s voice feels like the room’s center of gravity.

In jail, this calm is no small feat. Meditation and sewing play a physiological role in helping the women heal, said Rhode.

“When you allow them to do things with their hands, like the crafts we do, they produce more oxytocin, which allows them to feel safe and secure,” said Rhode.

Thirty-one-year-old Kristine Cudak was sentenced to a year for burglary and dealing in stolen property. She has three kids back home in Illinois, the youngest of whom is on a ventilator.

“Just emotionally, it’s draining to know that at any time, if something was to happen to my child, if his oxygen level drops,” said Cudak, at any time, my son can pass away.”

During her first few weeks in jail, Kristine cried constantly from stress. She had trouble reaching her mother by phone, and couldn’t get any updates about her kids. Others inmates suggested that she try Red Tent.  A move Cudak describes as empowering.

Audrey Myers, who many of the inmates call ‘Mama Bear,’ has her family on her mind too.

“I’m really anxious to be with my family, with people that love me,” said Myers. “And not feeling like a stranger in a strange place.”

Myers will be released from jail in a few months. She dreams of cooking big meals for her family, and throwing a birthday party for her mother, who’s in her eighties.

But for now, Red Tent keeps her going.

Red Tent gatherings happen three times a week. You can bet that Audrey Myers will be there for the next one.