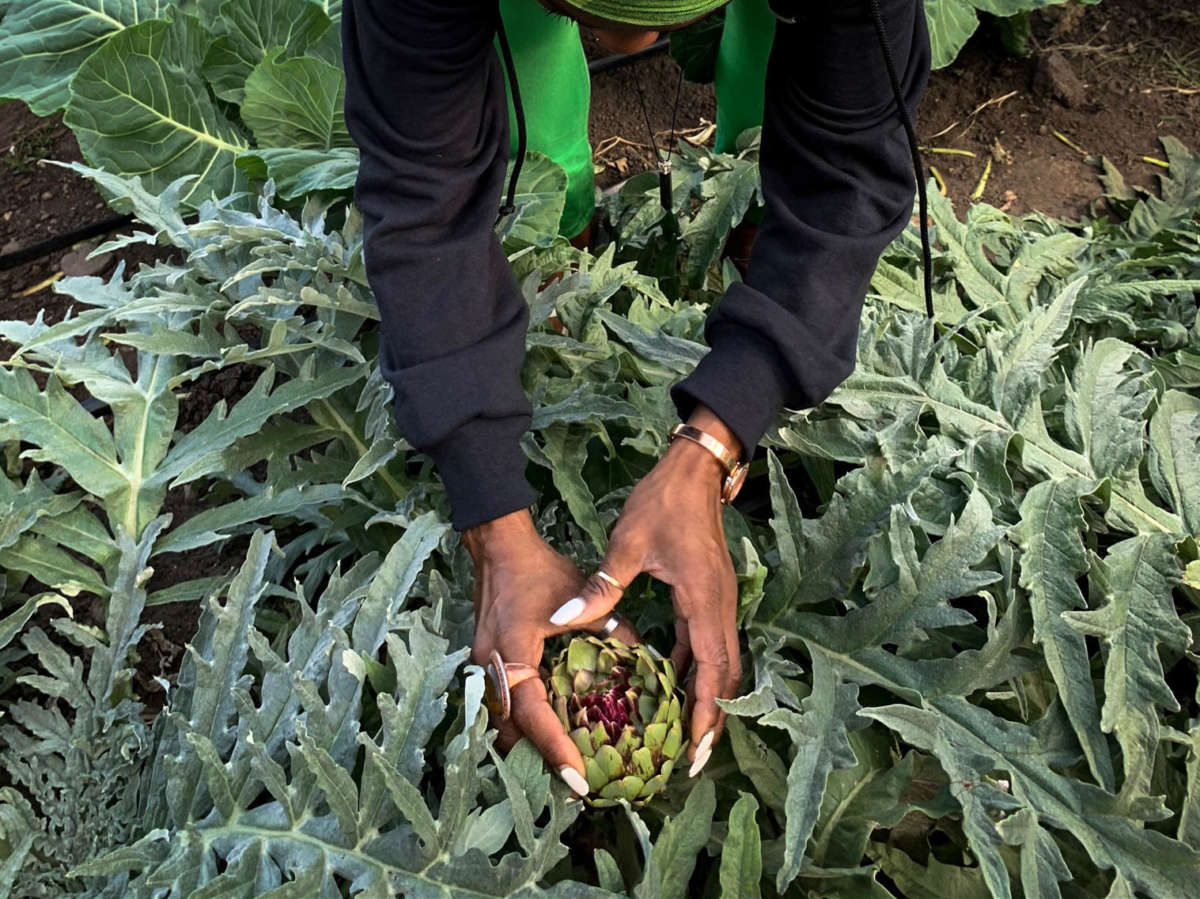 Princess Haley, co-founder of a group called Appetite for Change, picks an artichoke to go into supply boxes of fresh produce. The group's mission is to improve the diet of families in Minneapolis.

When police killed George Floyd outside a Minneapolis corner store, it reminded the world that racism can become lethal. But just a few miles away, on the North side of the city, racial inequality plays out in a more ordinary, yet still harmful way: A lack of fresh food.

Protests after Floyd’s death damaged and shut down the only full-service grocery store within a 3-mile radius of North Minneapolis. For two months, what remained were dozens of fast food and convenience stores. Access to fresh food has been a struggle for decades, but now it’s compounding the health effects of the pandemic. Chronic conditions like obesity, hypertension, and diabetes — all linked to a poor diet — are putting people at higher risk of serious illness and death from COVID-19.

A group called Appetite for Change is trying to lead the community down a different path, teaching others to grow their way to healthy food. Co-founder Princess Haley, a teacher, says the mission is to improve the local diet. During the pandemic, the group has been harvesting artichokes and leafy greens to supply boxes of free produce every week to 300 local families.

Haley co-founded Appetite for Change as a way to improve access to healthy food and better the health of residents in her community. “I feel like the garden is truly a healing space,” says Haley.
Yuki Noguchi/NPR

Haley stands in a community garden the size of a soccer field on a residential block, surveying end-of-season rainbow chard, habanero peppers and purple tomatoes. She hovers over the plants, bragging about their merits: how okra helped heal her arthritic knees, and how she turned a friend on to broccoli greens when collards weren’t available.

For Haley, tragedy and healing, death and justice come together in this garden. She taught her middle child, Anthony Titus, to grow cucumbers here. He, in turn, dared her to taste manure.

A decade ago, on the Fourth of July, Anthony was walking by this garden, when a stray bullet pierced his back.

“I’m looking right at the house where he died in their yard,” says Haley, nodding across the street. “I can see the fence where the bullet hit him and his hat fell.” Titus, nicknamed Prince Charming, was 16.

“That trauma took me away from my garden,” says Haley. “It took away my appetite for life.” She isolated herself and drank to bury her anger and sorrow. Her son’s cucumber plants went neglected.

Then, one day, she felt called outdoors: “I remember the sun, clear as day saying, ‘Why don’t you go out to your garden? Why did you let your garden die?'”

Bringing the cucumbers and strawberry plants back to life, she says, revived her.

Appetite for Change teaches others to grow their own food in the absence of available healthy options in North Minneapolis. Throughout the pandemic they have also provided free produce to 300 local families.
Yuki Noguchi/NPR

“I could only pull myself out of it in the garden. I feel like the garden is truly a healing space,” says Haley.

Over time, she began to see her community’s problems of violence and poverty in a new light. If health is linked to how we eat, and people in her community have little access to fresh food, they cannot be well in other ways, she says.

Diet-related illnesses are one of the reasons COVID-19 is claiming more Black and Latino lives here, and nationally. Obesity is one of the risk factors for serious illness and death from COVID-19, and obesity rates are higher in the Black and Latino communities, according to data from the Centers for Disease Control and Prevention. And in the neighborhood around the garden, about a third of all residents have high blood pressure and obesity.

“For people to constantly die in my neighborhood every day and a lot of that having to relate to the diet that they have is not OK,” says LaTasha Powell, another co-founder of Appetite for Change.

Growing up in North Minneapolis, Powell says she could walk to five grocery stores from home. As a child, she shopped, cooked and ate together with her sprawling family, which often included a network of friends and neighbors. Today, she says, local food culture revolves around fast, fried foods. She says she counted 38 fast-food stores along or near Broadway, the main commercial avenue cutting through North Minneapolis.

LaTasha Powell, another co-founder of Appetite for Change, grew up in North Minneapolis. She says that as a child she could walk to five grocery stores in the neighborhood. Over time she saw the culture shift towards fast food. She lobbied grocery chains to bring in more diverse produce but it didn’t happen.
Yuki Noguchi/NPR

Fighting against this artery-clogging food culture has met with resistance, even from within, she says. For example, when Powell became a vegetarian after losing her beloved grandmother and other family to heart attacks, people in her community accused her of betrayal. “They told me I was trying to be a white woman, that I was eating rabbit food,” she says.

Powell says she thinks the low expectations for healthy eating are driven by the paltry options around her. She lobbied grocery chains to bring in the kind of “paradise of produce” she saw at suburban stores several miles away.

The closest health-food store, North Market, opened three years ago, three miles from where Powell lives. It is backed by a non-profit, Pillsbury United Communities, with a mission to improve access to health and wellness among lower-income residents. Pillsbury’s CEO, Adair Mosley, says revenue at the market only recently met its targets — a lengthy time frame he says few for-profit chains would tolerate.

“It becomes a vicious cycle because you don’t have the businesses there, so people are not able to support themselves and to live healthy lives — there are no employment opportunities represented by those businesses, and people’s health is suffering because of the absence of healthy choices,” he says.

So LaTasha Powell gave up on the prospect of corporate change or outside help.

“I don’t have the energy or the power to fight a corporation who doesn’t want to do right by my community,” she says. “But what is the alternative way that we can get what we need for the people that live here in this community?” That alternative way, for now, consists of the gardens, and Princess Haley, the woman whose son died on the Fourth of July.

Haley, who also runs education and training programs for Appetite for Change, regularly brings local students to the group’s community gardens to harvest produce to distribute in the giveaway boxes.

Her 15-year-old daughter, Princess-Ann, is often among them, and complains of hunger, asking her mother to let her buy a granola bar.

“Find something in the garden,” Haley tells her, between bites of crab apple from the tree above her.

“Mama, I don’t like tomatoes,” her daughter protests, pressing her point.

“You see? This is what it takes to get kids to eat fresh food,” Haley says, ignoring her to twist off ripe okra.

Haley says she sees her task as changing minds about food and healthy eating, one person at a time. With a pandemic and police violence raging around them, it’s never been a more crucial message, she says.

“The meaning of the name George — and I am talking about George Floyd — His name means “the farmer,” Haley says. George is derived from the Greek word georgos meaning earth worker. “His name represents the land,” Haley says.

Some friends tell her that gardening feels too reminiscent of their family legacy with slavery. It’s the opposite, Haley tells them: It’s a source of justice. When grocery shelves are bare, gardens feed you.

“Then they become concerned about the soil, the air in the water,” Haley says. “Once that individual makes that change in their social circle, changes their children, make different decisions. Then their friends want to know, ‘Girl, what’s that in that pot?'”

Carl Childs works after school with Appetite for Change, helping provide produce to families who can’t easily access it. “It’s really important and I love it, giving back to the community,” he says.
Yuki Noguchi/NPR

One of Haley’s converts is 17-year-old Carl Childs, who shows me how to properly pluck fronds of Dino kale so as not to damage the plant. Childs says he wants to become a dental hygienist one day. He discovered a love of snap peas working after school with Appetite for Change, and lately feels huge satisfaction providing produce to those who otherwise can’t access it.

“It’s really important and I love it, giving back to the community,” he says. Haley’s daughter, Princess-Ann, watches Childs eat a speckled tomato, similar to the one she told her mother she hated. Curious, she bites into one too.

“OK, this is good,” she admits, with her mother out of earshot.

And that’s how the convert becomes the preacher.