A Free In-School Grocery Store Is Tackling Child Hunger, One Family At A Time 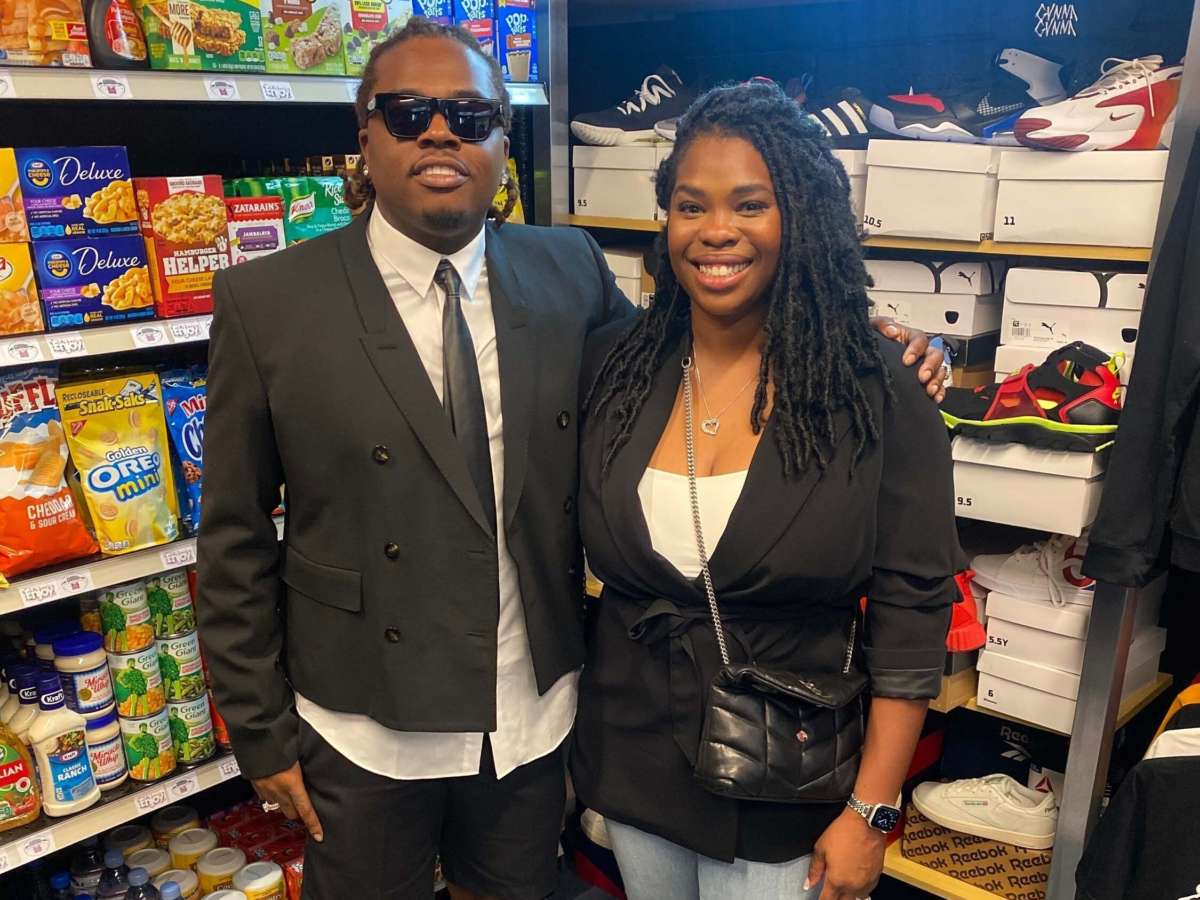 Rapper Gunna and Goodr CEO Jasmine Crowe pose for a photo in the first ever Goodr grocery store at an Atlanta middle school he formerly attended.

In America, around 17 million children are battling hunger. An entrepreneur has teamed with rap star Gunna to open a free grocery store inside his old middle school in Georgia to try to begin to change that.

Social entrepreneur Jasmine Crowe knows a thing or two about getting creative in the pursuit of giving back. As CEO of Goodr, a startup dedicated to eliminating food waste, her bread and butter has been helping those who need it most.

It’s always been a dream of hers to open brick-and-mortar locations to do just that, Crowe said in an interview with NPR. Partnering with Gunna, who she and her company have worked with for years on charitable efforts, helped turned that dream into a reality for the students and families at Ronald McNair Middle School in Atlanta.

The store, called Gunna’s Drip Closet And Goodr Grocery Store, has an array of foods, household items, toiletries, and even clothes and shoes for students and their families.

“The principal describes it as like a mini Walmart,” Crowe said.

But the biggest difference, of course, is that everything is absolutely free. Stock is replenished weekly, and there are vegan options as well as fresh produce. Also present are plenty of easy and quick options, which were chosen for a very specific reason.

“We were really conscious of making sure that we were providing items that the kids could make themselves because the principal let us know that a lot of these kids, when they leave school, they are essentially adults that are making the meals,” Crowe explained. “They’re doing everything for their household.”

Parents can come shop after dropping off their children for school, and they even have the option of using an app, created exclusively for the school, to reserve a shopping time slot or request items.

Goodr also gifted every student with a reusable shopping bag, not just to avoid waste, but to provide students with the option to shop anonymously; since every student has a bag to use for anything at any time, there’s no real way to know if a student has gone shopping at the Goodr store, Crowe explained on Twitter.

For some parents, whose children now have the option of bringing home dinner for the entire family, it’s been a dream come true, Crowe told NPR.

“I know we’ve received tons of messages from parents that are just saying, ‘You know what? You don’t know how much you just saved my life,’ because now these kids can literally say, ‘Mom, I’ll bring dinner home.’ … [With so many parents earning minimum wage] sometimes they’re working two and three jobs and there are little kids at the house,” she said. “So it is really good to be able to have that there.”

This store is only the beginning

When Gunna approached Goodr about ways to help out his community during the back-to-school season, Crowe saw an opportunity to give back in a way that would have a more lasting effect than handing out school supplies, she said.

“I just wanted us to do something that would last and just be more sustainable and that we can continue to build upon,” she said.

That’s when Gunna and Crowe teamed up to help Ronald McNair Middle, where Gunna, born Sergio Kitchens, was once a student himself. The store, which had its grand opening last week, will remain open during the school year. It’s maintained by store managers, whose pay is also covered by Gunna’s sponsorship. The store will close in the summer, when the students are gone, but all the food items will be sent home to families before then to reduce waste.

They don’t have to worry about keeping the store alive, either. According to Crowe, Gunna, who took to Instagram this week to share photos and videos of the store’s opening day, has committed to funding the store for “as long as he is alive.”

As for Crowe, she’s been in the business of helping others for nearly a decade now. She began feeding those in need out of the kitchen of her small Atlanta apartment in 2013, buying all of the food and preparing it on her own every weekend for more than three years.

Crowe’s company, Goodr, launched in 2017, describes itself as a “surplus food recovery service.” It helps connect businesses that have excess food items with nonprofit organizations that could use those items, operating in pursuit of the mission to “feed more, waste less.”

Goodr has also been hosting pop-up free grocery stores around the country in addition to organizing free grocery deliveries for senior citizens. Still, according to Crowe, there’s always room to do more.

“We have a lot of work that we do around children and seniors, and I just thought it would be so great if we had a real location that provided that direct access for kids,” she said. “I just felt like there’s a need. So many kids don’t know where their next meal is coming from, and here was an opportunity to bring the food directly to them.”

Crowe hopes to partner with more celebrities and brands who can act as sponsors and open more Goodr stores in the future, feeding more people for free. In the meantime, there are also plans to expand the offerings at Gunna’s Goodr store by offering additional resources like recipe cards and instructional cooking videos.

Those who want to be involved can contribute food donations to the school’s front office or even have items delivered via Amazon Fresh. Crowe also has a children’s book releasing next month called Everybody Eats, with proceeds going toward programs to feed children.

“To see the impact that it’s really made on these families and just to hear those things, it’s just been amazing,” Crowe said. “… this is just the beginning. It’s only going to get better.”