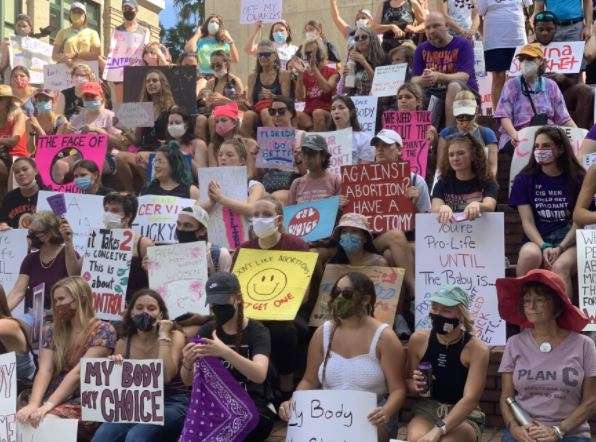 Abortion rights activists gather during a rally in Tampa in October 2021. (Stephanie Colombini/WUSF)

A proposal that would prevent doctors from performing abortions after 15 weeks of pregnancy got initial backing Wednesday in the Senate, as Republicans rejected an amendment that would have made exceptions for victims of rape and incest.

The measure (SB 146) has emerged as one of the most controversial issues of the 2022 legislative session, drawing heavy opposition from Democrats and other abortion-rights supporters.

The Republican-controlled Senate Health Policy Committee approved the bill in a 6-4 vote along party lines. The measure needs approval from the Senate Appropriations Committee before it could go to the full Senate. The House version of the bill (HB 5) also has moved forward in committees.

The proposed 15-week restriction closely resembles a Mississippi law that is before the U.S. Supreme Court. The outcome of the case could determine whether the landmark 1973 Roe v. Wade decision on abortion rights is scaled back or overturned. Justices on the conservative-dominated court heard arguments in December.

Senate Democrats on Wednesday questioned bill sponsor Kelli Stargel, R-Lakeland, about why the measure would draw the line on abortions at 15 weeks.

“The reason that we chose 15 weeks is because at that point in development in the baby, they have the ability to feel pain, they have bone structure, they have fingernails, they have begun the sex organs,” Stargel, chairwoman of the powerful Senate Appropriations Committee, said.

The Mississippi law also has factored into the Florida proposal. House sponsor Erin Grall, R-Vero Beach, told a committee last month that “we have a unique opportunity in the fact that the Supreme Court is considering 15 weeks right now” and that the bill would “allow Florida to save as many babies as possible, as soon as possible.”

The Senate measure includes an exception to the 15-week restriction if two physicians confirm that a fetus has what the bill calls a “fatal fetal abnormality.” The bill defines such fetal abnormalities as a condition that, “regardless of the provision of life-saving medical treatment, is incompatible with life outside the womb” and would result in death upon or immediately after birth.

But the bill does not make an exception for victims of rape and incest.

Republicans on the committee voted down a proposed amendment by Minority Leader Lauren Book, D-Plantation, that sought to provide an exemption for victims of rape and incest.

“As a survivor of sexual assault, I’m deeply, deeply concerned … (about) what (the bill) will mean for women and girls across the state who may become pregnant as a result of rape,” Book said.

Speaking to reporters after the meeting, Stargel defended the decision to reject the proposed amendment.

“Like I said in the debate, women who have had incestual situations, more often than not, are encouraged to have that abortion so that evidence is gone. That’s what happens to these young women in reality. Women who are human trafficked have repeated abortions … so that they can get back on the street. If you really want to protect these women, dealing with abortion is not the way to do it,” Stargel said.

The proposed abortion restriction is drawing attention from organizations across the state, including a group of 450 medical professionals who signed an open letter to legislative leaders opposing the House and Senate bills. The letter, dated Wednesday, argued that the measure seeks to “improperly insert politics into the patient-clinician relationship.”

“Legislation should not place unnecessary interference or restrictions on me in my provision of health care to the women that I … take care of, including those who are seeking abortion care. That’s the bottom line,” Tampa-based obstetrician and gynecologist Haywood Brown, who was among the physicians who signed the letter, told The News Service of Florida.

Gov. Ron DeSantis last month signaled that he would sign the measure if it passes, saying he’s “supportive of 15 weeks” and finds the restriction “reasonable.”

Agriculture Commissioner Nikki Fried, a Democratic candidate for governor, testified against the bill Wednesday and suggested that Republicans lawmakers were considering the measure at the direction of DeSantis.

“I know that you don’t want to do this. We are all public servants to serve the public, not to serve the governor,” Fried said.

But Stargel swiftly rebuked Fried’s comment. Stargel has spoken in the past about how she was urged to get an abortion when she was a teen but did not have the procedure and said Wednesday that she has been focused on abortion issues since she became a lawmaker.

“(Fried) made it sound as though this was some sort of a top-down approach and that the people on this committee do not care. And I can tell you from serving with many of these members for years, they very much care. And it’s not coming from an outside force. For several of them, I know it became their reasons for wanting to run for office and their reasons for wanting to be involved in public policy,” Stargel told reporters.