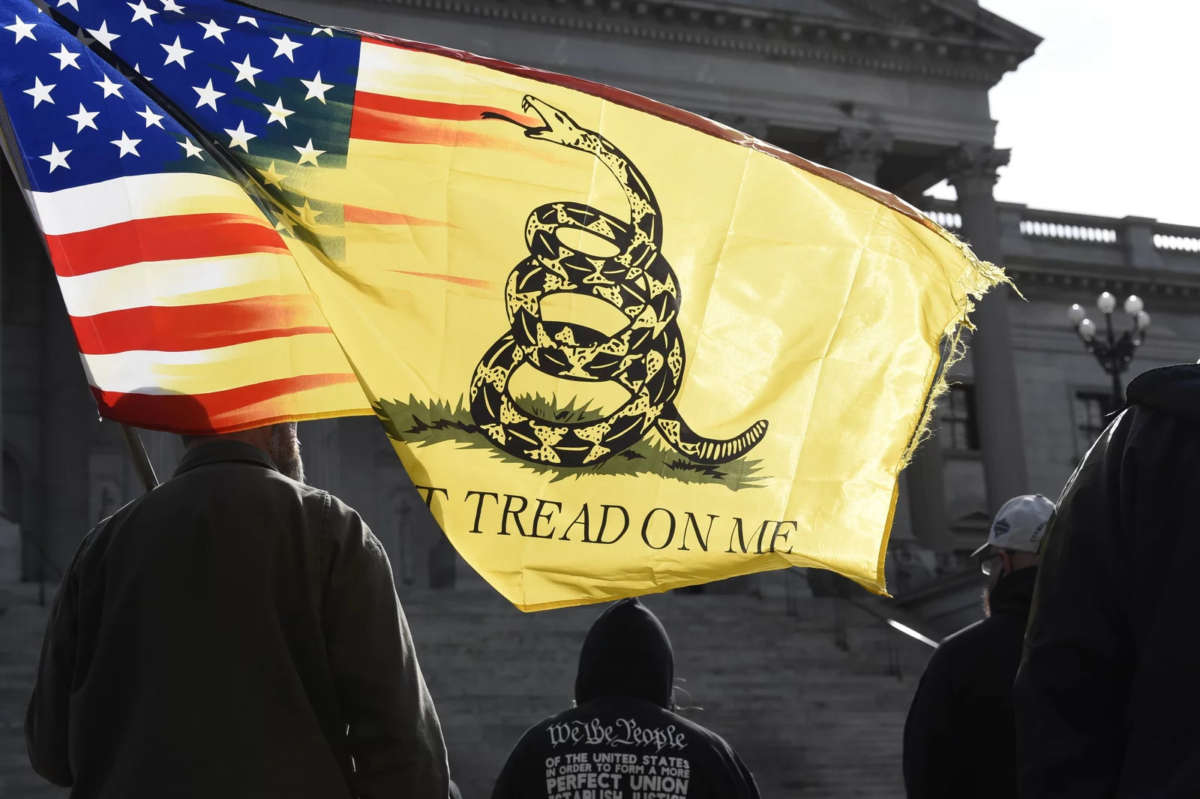 A man holds a flag and listens to a speaker during a rally at South Carolina's Statehouse on Sunday, Jan. 17, 2021, in Columbia, S.C. Meg Kinnard/AP

When Florida Gov. Ron DeSantis recently tweeted an image of what he said was a new state license plate featuring a coiled rattlesnake and the words “Don’t Tread on Me,” he said it sends a “clear message to out-of-state cars.”

The imagery of the Revolutionary War-era Gadsden flag dates to Benjamin Franklin but has, for many, come to symbolize a far-right extremist ideology and the “Stop the Steal” movement that sought to overturn the 2020 presidential election results.

“‘Love, love, love’ Florida Gov. DeSantis new license plate; ‘Don’t Tread on Me!'” one Twitter user said. “This is how we feel about our great country..that is right now being systematically destroyed by the radical Left.”

But such plates have gotten push back, not only in Florida, but in states such as Kansas, Missouri and Virginia, where similar plates have been available, in some cases for years, as fundraising tools for various organizations.

“The state can’t claim a lack of knowledge about what this image represents to most of the public,” says Rachel Carroll Rivas, deputy director of research and analysis for the Intelligence Project at the Southern Poverty Law Center.

She says it’s become clear that the flag has been used for some “really awful” causes, most notably the Jan. 6 insurrection at the U.S. Capitol, where violent protesters attacked police as part of an effort to overturn the results of the 2020 presidential election.

Carroll Rivas compares it to a similar controversy over the use of the Confederate “stars and bars” flag on license plates. In 2009, the group Confederate Veterans, Inc., requested the flag on a specialty license plate, but Texas refused. The veterans group sued, and the case ultimately went to the Supreme Court. In 2015, in a 5-4 decision, the court held that such specialty plates (not to be confused with “vanity plates”) were government speech and therefore states have the right to pick and choose what goes on them.

The long history of ‘Don’t tread on me’

Benjamin Franklin was the first to use the rattlesnake as a symbol of defiance against the British crown, says Marc Leepson, a journalist, historian and author of Flag: An American Biography. In 1775, Christopher Gadsden, a South Carolina politician, “took that menacing rattle rattlesnake and put it on the flag,” Leepson says.

“One thing we can say about its origins, regardless of how it’s used or who uses it or why it’s used today, is that it really was just completely an anti-British [and] anti-colonial symbol,” he says.

The journalist Rob Walker, writing in The New Yorker in 2016, said, “The Gadsden design remained something of a Revolutionary relic for many years.” However, “[by] the nineteen-seventies, it had some popularity in Libertarian circles, as a symbol of ideological enthusiasm for minimal government and the rights of individuals.”

A discarded Gadsden flag inside the U.S. Capitol on Jan. 6, 2021.
Erin Scott/Bloomberg via Getty Images

Then came the Tea Party movement, which adopted the banner in 2010 as a sort of catch-all symbol of disgust with government. Since then, it has gone on to become a symbol for anti-government groups and individuals.

Extreme or not, First Amendment scholars such as Eugene Volokh of the University of Southern California say the Gadsden flag and the “Don’t Tread on Me” motto are legitimate — and protected — speech, whether they are on a flag waving inside the besieged U.S. Capitol or on a vehicle license plate heading down a Florida highway.

“We know that some people are upset by that slogan,” Volokh says. But, “the government is perfectly entitled to take controversial stands or in this case stands that have become newly controversial because some very small group of people have ended up using a symbol for purposes that are very different” from what it originally signified.

Plates in other states are also political

“I’ve seen some ‘Live free or die’ license plates in New Hampshire, which of course has been the state motto for decades,” Dallek says. “You could argue that that certainly is a political statement” with a “fairly strong libertarian streak.” District of Columbia plates, which have long sported the colonial-era rallying cry “No taxation without representation” are also in that vein, he says.

“But I think that ‘Don’t Tread on Me’ has different, more extreme connotations, and therefore is more political and certainly is much more politicized,” Dallek adds.

Politicized plates are available for other hot-button issues, as well. For example, “Trust Women/Respect Choice” is an option in Virginia, just as “Choose Life” is available on plates in Nebraska.

In the states where “Don’t Tread on Me” plates have been introduced, they appear to be top sellers. And that’s good news for the Florida Veterans Foundation, a veterans’ advocacy group that stands to get $25 per Gadsden flag license plate.

But it hasn’t been an easy road, says Chairman Dennis Baker. The choice of the Gadsden flag was made not by the group, but by a lawmaker pushing for the fundraising plate in 2019. “I think it was because other states were having such good success with it,” he says.

He says the money the foundation hoped to raise could go a long way toward helping Florida veterans.

“Then January 6th happened and it was like, ‘oh, s***,'” he says. By then it was too late, because Florida’s legislature had already approved the design.

Baker explains that a minimum threshold of 3,000 plates must be preordered before the state will begin producing them. The Gadsden plate approved for the foundation had been languishing, but got a sudden boost after Gov. DeSantis’ tweet last month, he says.

“I’m sure there’s going to be at least a million people” who will now order one, says Baker. “I’m thinking there’s that many people in Florida who would like to have the plate.”

Kansas adopted the plate after Jan. 6 and despite the governor’s veto

While Florida introduced the plate design in 2019, Virginia and Missouri did so a decade ago. Kansas approved the “Don’t Tread on Me” plates only weeks after the Jan. 6, 2021 insurrection, when television images of rioters waving the flag were still fresh.

Democrat Dinah Sykes, minority leader in the Kansas Senate, opposed the measure when it came up for a vote in March of last year. “Whatever the original symbology of [the Gadsden flag] was … I think a lot of people would argue that it’s become a symbol of the people who marched on the Capitol,” she says.

The plate design, meant to raise funds for the Kansas State Rifle Association, was subsequently vetoed by Kansas Gov. Laura Kelly, a Democrat, before the Republican-controlled legislature overrode it.

“I don’t think it’s appropriate,” says Sykes, who is the Kansas Senate minority leader. “When I see that, whether it’s a flag or a license plate … it’s not a good feeling for me.”