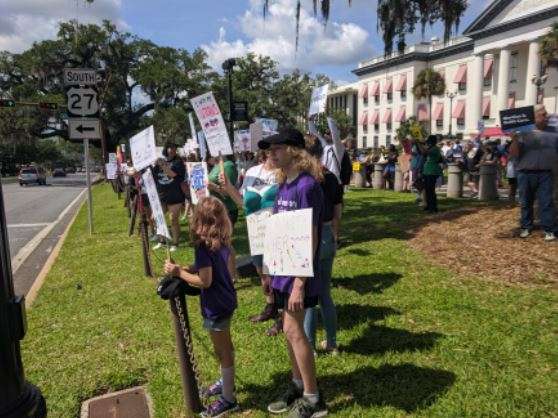 Demonstrators lined up in front of the Historic Florida Capitol to wave signs in support of their cause. (Tom Flanigan/WFSU)

Demonstrations favoring abortion rights took place across the nation on Saturday. One of these happened in front of the Historic Florida Capitol.

By eleven Saturday morning, several hundred people had gathered in front of the Capitol. Among them were Linda Rivers, Lakey Love and David Fabis.

“We just keep on fighting. I thought this was settled 50 years ago,” said Rivers.

“It will stay an issue,” said Fabis, “this is not going to calm down. The majority of the people right now are for keeping it the way it is.”

Several speakers then reamplified those thoughts from the podium on the Capitol steps. A number of them also voiced fears abortion opponents might enact other reproductive restrictions in the future.

Abortion rights supporters rallied across America on Saturday. They were voicing their anger over a leaked majority opinion by the U.S. Supreme Court that would overturn Roe v Wade.