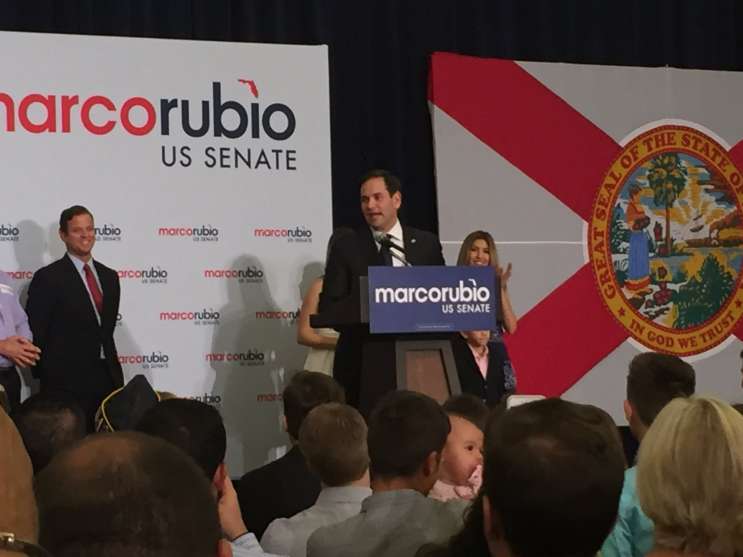 Races from school board to the U.S. Senate were decided in Tuesday night’s primary.

In the Senate race, Marco Rubio came out on top in the Republican primary. Standing before supporters in Kissimmee, Rubio recited a list of what he’s done in office – from proposing sanctions on terrorist groups, to support for veterans, to tax reform.

“And that’s why I’m asking the people of Florida to return me to the United States Senate,” Rubio said. “So that I can continue this work on your behalf, and so that we can have a Senate that returns to its proper role under our constitution.”

In the Democratic primary, Patrick Murphy beat out Alan Grayson. Grayson said he refuses to vote for Murphy in the November election against Rubio. Grayson’s campaign suffered from scandals, and he blames Murphy for playing dirty in the primary.

“All Patrick did all year long is sling mud and try to smear me, it’s the dirtiest campaign I’ve ever seen in the state of Florida,” Grayson said.

Grayson said he will next focus his attention on social justice issues.

One of the biggest upsets of the night came in the 9th Circuit Court democratic primary for state attorney, where Aramis Ayala beat incumbent Jeff Ashton.

Results of other races across central Florida are below.

Amendment No. 4 (property tax exemptions for solar and other renewable energy devices)

Floridians Get Out To Vote On Primary Day

Before the polls opened for Tuesday’s primary some 1.7 million voters had already cast their ballots. Voting by mail started more than a month ago and early voting started 15 days before the primary. Some 1.2 million vote-by-mail ballots were sent out but not returned as of Monday morning.

“These numbers have also surpassed vote by mail and early voting totals for the 2012 and 2014 primary elections respectively,” said Florida Secretary of State Ken Detzner.

It was a steady trickle of voters in the morning at Seminole County’s largest polling location. Emily Vargas is a mother of four and says education was the issue that drove her to vote at Tuscawilla Country Club in Winter Springs.

“I don’t feel like education is where it should be. I feel like we’re dumbing down our schools instead of elevating them,” said Vargas. “I feel like our children are worth more than that. I see more money going to administration and less money going to teachers and less going to students.”

Glitches Across Florida
Seminole County discovered a technical glitch that wrongly reported some people had already voted. Elections supervisor Michael Ertel said a database used in the March presidential primary was accidentally uploaded onto some of the iPads used to check in voters. Those voters were then checked in on paper.

“No voter has been turned away, it hasn’t caused any voter to not be able to vote. But what it has done is caused them to take an additional thirty seconds to a minute to be able to check in,” said Ertel.

Every precinct is being contacted to find out how many were affected by the iPad glitch.

Polling places in Flagler and Lee County did not open on time. In Flagler County, the fire department located across the street helped open the polling place after a poll worker was unable to open the site, said Detzner.

In Miami Beach, a polling place was moved from the Miami Beach Botanical Gardens to City Hall because authorities are inspecting and spraying for mosquitoes that carry the Zika virus, said Detzner.

Concerns About Hacking
One type of glitch that elections supervisors say will not affect Florida’s primary voting is hacking. The FBI issued a warning after it says it detected breaches in Arizona and Illinois voter registration databases. But Orange County Elections Supervisor Bill Cowles said at least Florida’s ballot process is paper-based.

“We can always recount paper if there’s some issue,” said Cowles. “So the timing of that message with our elections hopefully did not discourage people from voting.”

Voting seems brisk, said Cowles. Orange County started Tuesday morning with about 3,000 voters per hour and he expects that number to grow.

Florida has nearly 12.4 million voters that break down into more than 4.4 million Republicans, 4.7 million Democrats and 2.9 million unaffiliated voters.