A Decade After Tsunami, Asia’s Shattered Coasts Are On The Mend 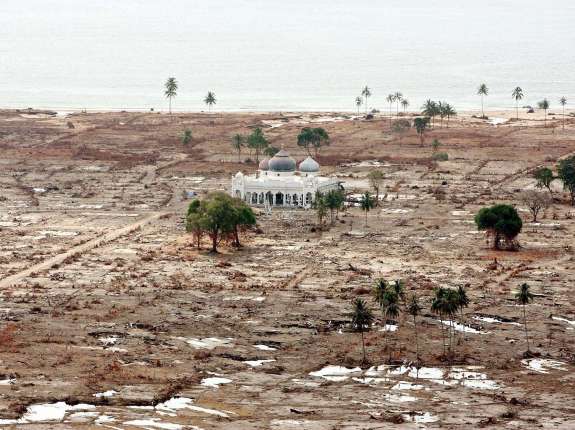 A lone mosque that survived devastating tidal waves sits amid the ruins of the village of Lhoknga, outside the provincial capital Banda Aceh, on Jan. 3, 2005. The mosque became a symbol of the tsunami's destruction.
Image credit: Bloomberg

It was one of the strongest earthquakes ever recorded and it triggered the deadliest tsunami in history.

On Dec. 26, 2004, a few minutes before 9 a.m. Indonesia time, the sea floor off the island of Sumatra was thrust upward during a massive 9.0-magnitude quake. Within hours, coastal settlements in 11 Indian Ocean countries had been washed away along with 230,000 people.

Most were killed by blunt-force trauma or simply drowned. Many were dragged out to sea as the walls of water retreated after smashing through trees, boats and buildings.

In Aceh province, a northern section of Sumatra that had seen more than a quarter-century of separatist strife, the city of Banda Aceh was wiped clean, all except for a single building – a stoutly built 135-year-old mosque.

In Thailand, bustling beach fronts in Phuket that were a favorite haunt of foreign tourists, were left as heaps of rubble. Many of those visitors, who’d arrived in Thailand’s during the peak tourist season, were dead or missing, along with thousands of Thais.

In one village in Sri Lanka, 1,500 people died, most who’d been aboard a passenger train that was lifted off its tracks and hurled aside by the giant waves.

In the past decade, however, many of the affected communities have begun to heal at least the physical wounds, partly with the help of Western aid that arrived in the tragedy’s aftermath.

In Indonesia, The China Morning Post says that thanks in part to roughly $7 billion in aid contributed by governments, non-governmental organizations and individual donors, Aceh has bounced back.

“In the first year, progress in Aceh was slow and frustration was high. But 10 years on, a very different picture has emerged. On many dimensions, life has returned to something that feels normal. It’s a recovery in which Aceh, the Indonesian nation and the world should take pride – but it did not come easily or cheaply.”

Some would say that if something good could be pulled from the death and destruction in Aceh, it’s this: the disaster encouraged a settlement in of the bloody insurgency that had claimed 15,000 lives since 1976. The Telegraph says the post-tsunami agreement forged between Jakarta and the Free Aceh Movement is the “most successful peace deal of modern times.” But, as the newspaper notes, many locals believed the tsunami was a punishment from God and in its wake the region has seen the implementation of sharia law and a rise in Islamic fundamentalism.

Thailand’s ever-hungry tourists ensured that the shattered restaurants, go-go bars and and t-shirt shacks in Phuket were quickly rebuilt, most of them farther up from the pounding surf than they’d been in their previous incarnations.

And for Sri Lanka, one village hit by the tsunami, Seenigama has become a model of prosperity, Reuters reports.

“Seenigama is an outlier, however, along the ravaged coastline. Tourists have returned to the palm-fringed beaches but livelihoods still hang by a thread in many villages that got scant assistance from the state. …

“‘Nothing has changed in our lives,’ said G. Premalal, a fisherman at Pereliya beach where the government has erected a granite monument to the tsunami dead. ‘We have low quality houses. A lot of money was donated for us, but it was not distributed equally. Some got richer and richer because of the tsunami money, while others simply became poorer.'”